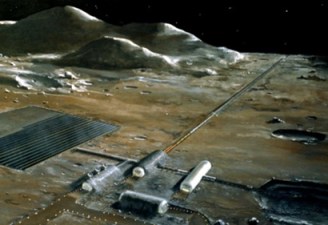 Above: This slingshot can shoot cargo into Earth orbit for pickup. It was also used by the European Space Agency to drop rocks on cities to end flame wars between superpowers.

The U.S. attempts to assert its authority in space by attacking a Soviet weapons platform. A short orbital war ensues until Luna Colony’s Tycho massdriver sends a rock crashing into Colorado Springs, turning most of it into a crater. The European Space Agency also hangs it over Moscow like a celestial Sword of Damocles, ensuring that the spats between the U.S. and the Soviets never escalate into MAD.

“Microsurgical waldoes ripcut through the perforated guts, swabbing, tying off, prepping. The doctor stitches in three feet of glistening wet, tank-grown intestine; plugs the punch holes with synthetic skin and muscle. Airhypoes inject the area with speeddrugs, fasthealers, endorphins, and antibacterials. Microscopic stitches hum off the serrated teeth of a minicloser, bonding flesh together almost as well as the original. In a month or two, there won’t even be a scar. Let’s hear it for newtech.”
– from Never Fade Away: A Cyberpunk Adventure, Cyberpunk: The Roleplaying Game of the Dark Future

By the time the world actually lurches into 2013, the U.S. is a shadow of its former self, afflicted with internal strife and a police-state mentality derived from a desperate attempt to hold what is left together. Though the country is no longer under martial law, the new laws it has adapted are drawn from what it did to survive its near-death. To solve the overpopulation problem of its prisons, criminals are stuffed into cryotubes and forced into a “braindance” — a looped nightmare of “bland horror” — because rehabilitation has proven pointless.

The Soviets are a new superpower, minus a few nukes that went missing, with a large portion of the world’s last accessible supplies of oil bolstering its economic power. It has also teamed up with Europe to send astronauts to Mars. The European community also controls a piece of the new world order on the ground and in space. Japan is now an economic partner in shoring up the U.S., and Africa has emerged as a continent of space engineers, using technological prosperity to sweep the last of its dictators under the rug beneath the shadow of the Kiliminjaro massdriver and the space ports that pop into the neighborhood.

The divisions between the haves and have-nots in the U.S. has skyrocketed, and a combination of plagues and mass rioting have left over 100 million dead in the home of the brave. Free states exist in an uneasy alliance with the federal government, which holds the largest power block with its military and a unified tax base to justify its influence. Canada is completely run by the corporations. The European Space Agency owns a monopoly on high orbit over the Earth with the biggest gun on the moon.

Cyberpunk 2020 pushed things a bit further. Science has managed to clone a full human body. The European Space Agency is sending a mission to Jupiter. A Third Corporate War is fought exclusively online. A riot breaks out in an orbital colony. And somewhere on Earth, there you are.

Above: Sharp-eyed fans of the original PnP will recognize the lingerie model in this screenshot as Alt. She also happens to be the hotshot programmer behind Soulkiller, a black program that can suck out your mind and box it in silicon. Whether or not this will really be Alt or if any of the regulars from the old materials cameo in the new game in some form or another, CD Projekt Red isn’t saying. At least, not yet.

Over the next few years, Cyberpunk continued expanding across a large number of supplements and books that added a lot of fluff and a few new tweaks to the mechanics, fleshing out a world of geopolitical jockeying, economic warfare, and engines of progress that ground down the populace from behind the polished glass faces of palacial opulence. Down in the cracks, people fight back with whatever they can salvage, beg, borrow, or steal against impossible odds and across a wide spectrum of fronts.

Rache Bartmoss and Spider Murphy taught their audience what the ‘net looked like and how to run it. Netwatch became the ‘net’s version of Big Brother. A.I.s lurked in the shadows or behind the virtual walls of corporate dataforts made up to look like anything from a feudal Japanese castle to a virtual Disney World. Cyberspace was extended into orbit, and there was always the persistent omnipresence of the corporate juggernauts who continue to run the world behind the facade of local governments.

It all nearly ended in flames during the Fourth Corporate War leading up through 2024. Arasaka, one of the biggest private security corporations on the planet led by Japanese nationalist Saburo Arasaka, would go out in a blaze of glory, detonating a nuke in the heart of Night City as the Japanese government turned against them at home. In the meantime, the U.S. and Europe invited their militaries to the party held in their own backyards, where Arasaka had a presence. It was a thunderous shake-up that promised to raise the stakes going forward.

Yet it didn’t quite have a definitive end. And what came out afterward was probably not what many expected.