Above: Teenagers and youths fighting the man with nanite-built superpowers! It’s even illustrated with an art direction that Kenichi Sonoda might have appreciated.

Five years after the first version of Cyberpunk hit shelves with its minimalist box set of sheets and black and white booklets, Cybergeneration arrived in 1993 to pick up where Fourth Corporate War left off.

This time around, players wouldn’t be playing grown up ‘punks. Instead, the game took a page from manga and anime as its art style had also done, and players were asked to play youths aged anywhere between 7 and 19. It brought players face to face with goboys, vidiots, streetfighters, and yogangs and ran them around corners dodging genies so that they could see another sunrise in 2027.

It was a radical departure from Cyberpunk’s established setting. Here, 2025 was when it all changed thanks to the Carbon Plague — a nanotech virus that could lead to death for a low percentage of anyone over the age of 20 who caught it. To those under 20, it did something else.

Like adults, they might be sick for awhile and recover with no side effects. Unlike adults, who could die from the plague, it gave a lucky few nanite-grown superpowers instead — powers fueled by nanotech that allowed them to communicate with machines like walking cyberdecks, turn skin into armor, remake matter into a pop soda, or throw bolts at bad guys without having to say “lightning bolt.”

The attitude was still the same — these were kids with a cause. Parentally neglected, orphaned on the street — pick your history. And they hate the system for it. Golden boys with a silver spoon in their mouths, for example, have seen what it has done to their parents, and they don’t want it to happen to them, so they do anything they can to rebel against it. For many others, however, simple survival trumps everything else.

Cybergeneration had a lot of neat ideas, one of which was being a kid with superpowers meant you were also saddled with a lot of lethal baggage that segregated you from a normal life. Corporate troopers are on the lookout to collect them all, for good or ill, as cyber-enhanced Ash Ketchums. Having neat-o powers didn’t make them invincible. But sticking together with their friends often gave them something that the heavily oppressive and fractured world of Cyberpunk didn’t often push: hope.

Which was one reason that Pondsmith and his team went in this direction — to address the problem from the first Cyberpunk of players who became walking weapon platforms. They wanted to bring it back down to the streets in a sort of reboot by injecting a little more mortality to the system. In Cybergeneration’s case, it was with a ceiling of deadlier-than-thou consequences. Though as interesting as that angle was, the setting didn’t garner quite as much support as Cyberpunk did with its massive catalog of supplements and newsletters or from players who didn’t warm up to the idea of playing nanotech-empowered youth angst.

This version came out in 2005 after years of waiting, and Pondsmith took up the Cyberpunk world from where the Firestorm series had left off in 2024, with the end of the Fourth Corporate War. Cybergeneration was all but ignored in this entry, which shook up its setting with themes of transhumanism, nanotech that built buildings overnight, and alt cults defining the attitudes and classes of the world in 203X. It wasn’t just an attempt to update the old series with what has gone on in tech over the the last 20 years. It wanted to leapfrog past it.

It also wasn’t as popular as the previous iteration from what I can gather mainly because of how radically it had smashed the world of the 2020s with a number of ideas that even hardcore fans had a hard time swallowing, such as a biovirus that destroyed all paper to obscure the truth of history and a worldwide crash that smashed databases like virtual piñatas.

CD Projekt Red confirmed that Night City is where the action will take place. The first edition of the game didn’t even have a location — it was only important for the “feel” that its high-rise towers and booster-gang-infested slums created. When the second edition came around with Cyberpunk 2020, it was then located between San Francisco and Los Angeles and given a backstory involving a developer named Richard Night, who bought up land hoping to create a safe city during the Collapse. 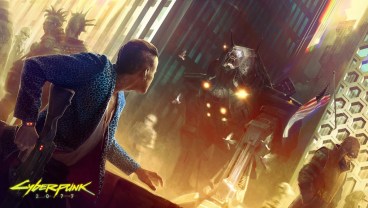 Above: On top of the usual dystopia, Cyberpunk 2077 wants to throw these at players, too. But at least this guy will look good before he’s recycled.

Unfortunately for Night, a number of unions that also had criminal backing didn’t take kindly to being snubbed when the buildings went up. Night was killed, the criminal organizations took over, and the desperate left behind in the Collapse were victimized once again when they arrived in a Night City.

In 2009, the corporations moved in and “wiped out” the criminal bosses, allowing them to clean it up. A semblance of order exists within its new and pristine corporate heart, but violence still clings to its streets as its corporate soldiers continue to wage a war against anyone threatening the peace — or cyberpunks breaking off more than their custom-fitted hands can grasp.

There’s also a lot of potential in making it into a colossal, urban dungeon rife with adventures — a microcosm of everything in Cyberpunk’s world. Though if they opt to take things up after the Fourth Corporate War, that might be a little tricky with a glassy, radioactive crater where Arasaka Tower and a few surrounding blocks used to be.

Which finally brings us to Cyberpunk 2077.