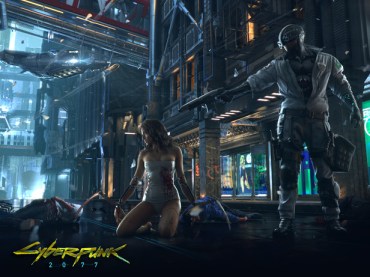 Above: Cyberpsycho with one too many arm scythe upgrades, or a bad braindance? That corp cop probably doesn’t care. Likely, he’s thinking more about the virtual paperwork he’ll have to fill out later.

Though the developer likely won’t adopt the worlds of Cybergeneration or version three, that’s not to say that it isn’t overloaded with speculative material that could easily make its way into the new timeline. Adding in 57 years to 2020’s history is a lot of margin to fill.

Big bad corporations, police-state cybersoldiers, and a missile-armed trauma team A.V. flying out to answer a broken card call are only scraping the surface. The series also has a sizeable lexicon of terms to fill its dialogues with between all of its editions — potentially mixing in poserboys and chromers with tinkertots and boardpunks to further distinguish the new game from its peers.

Character-build mechanics are still a mystery though Cyberpunk’s life story system essentially set up a background to determine things like your childhood, how much high school education you received, romantic involvements, or enemies you’ve made — similar in a way to what a number of other console-RPGs have also used, such as Origin’s Ultima IV.

Cyber-stuff also has a price beyond the retail sticker. Loading up on too much can literally make you a monster. A system was built in that penalized the player’s humanity depending on what was replaced, letting you roll dice to see just how bad the loss would be. So replacing those eyes of yours might just be the things that tip your cyber-psychosis over the edge, turning you into a cyber-psycho and effectively making you something that your friends might have to put down before stripping for parts. They’re looking to score a few upgrades, too.

Its aesthetics also had a bit more in common with the dirty future of the first Deus Ex than Human Revolution, though gunning through gang bangers or staying out of their warpath was something that it shared with both. Bullfrog’s corporate superpowers underpinning Syndicate’s world also share the disregard for collateral damage that Cyberpunk’s megacorps deftly calculate into their fiscal reports. And despite wildly deviating from the original’s mechanics, Starbreeze’s Syndicate shares a few elements with classic Cyberpunk and even Cybergeneration’s virtual terminals and wizard class, sans the anime influence.

Adding in the consequence-laden approach that CD Projekt Red has integrated into its The Witcher series and the lavish attention it pays to the source material (Cyberpunk’s Blade Runner-esque, urban sci-fi, which pushes technology to the edge along with the morals of those dragged along for the ride), this Cyberpunk stands ready to offer up a more brutish, hard-hitting alternative, adding a little more dystopia to everyone’s diet.

Some elements will obviously require a bit of updating unless Russia somehow manages to fall back into the hands of the Communist hardliners — or if CD Projekt Red instead decides to stick China in its place. But anything could happen in Cyberpunk, especially in a setting where rocks can be dropped from the moon to keep everyone civil. It’s this sheer body of fiction that makes this world as exciting as the upcoming Shadowrun Returns.

Cyberpunk’s attitude doesn’t expect you to change the world overnight. Like loose screws tumbling between the teeth of finely tuned cogs that churn relentlessly in their set patterns, players might be the one thing that can gum up the system — at least until someone yanks them out or they’re knocked loose to shake things up again later. But slotting the latest gear, looking sharp while doing it, and swaggering into an retro arcade with enough firepower in your fist to wipe the smirk off of anyone’s face — now that’s cyberpunk.

Like Pondsmith and his team wrote so many years ago, you might be able to do some good along the way. In the end, that’s just a bonus to surviving long enough to make it back to your day job.