We’ve collectively failed as a community once more. Even though only some of us acted poorly, the fact that one side clearly pushed its rhetoric through has made this less of an open place and more of a restricted area: no fun allowed. To give this ongoing lament some context, Deep Silver announced on Tuesday a risqué collector’s edition for Dead Island: Riptide called the Zombie Bait Edition, which prominently displayed a severed and dismembered torso with big breasts and small clothing. Is it tacky? Yes, probably. Is it reason for a mass outcry? Hardly. 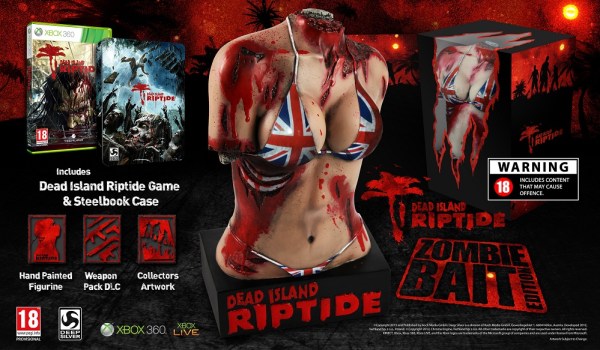 Normally, I’d make this into an official piece, thinking up a point-by-point case, argument, solution, future thought, and that sort of thing. However, that would require me to go on endlessly about a topic that is out of my hands in this industry already. Instead, the swift rebuttal here serves to prove that this is a personal standpoint though it has the same basis as most of my op-ed pieces. For those wondering, I live by the Golden Rule. It’s that well-known line that goes, “Treat others like you would wish to be treated.” On that aspect, we treated the Zombie Bait Edition news like we would want to be picked apart by vultures. It’s a standpoint I can respect but not one I can condone.

News outlets were quick to release statements about how “offensive,” “disgusting,” “repulsive,” and “outrageous” (and so on) the limited edition was thought to be. I’m not saying such a provocative item won’t burn in anyone’s eyes. I, too, am offended when Halo thinks it’s a good idea to run its promotions with Doritos chips and Mountain Dew, which implies that we’re all greasy pigs. However, would I call for a massive outcry oversomeone offering a bust? No, not really. I’m not mad at art history for doing the same.

The point can be argued until the cows are dead and we’re serving their racks in a self-righteous buffet of hypocrisy, but it’s where my mind immediately went to. I immediately associated it with a bust because that’s what it is: a bust, which is defined as “the human chest.” That seems accurate to me. Dead Island also features dead women in skimpy, tropical outfits and has dismemberment elements to the gameplay. All these things are fitting, and no one gave a crap about that when the original game came out.

Above: This shot of headless torsos is completely justifiable because … ??? … profit.

No — prior to that, Deep Silver released a clip containing the “magical negro” trope, which was linked to the character Sam B but doesn’t resemble him in the slightest. That is, unless you’re a racist and think all black people look alike. Moreover, that clip is also filled with objectification, but that is OK why, exactly? Is it that hip-hop makes it acceptable? Is it because black people use women as toys? No matter how you look at it, it’s going to be bad when a clip shows over a dozen shots of body parts with no face for no reason other than to show it. Again, here, no one cared. It’s an issue now that Deep Silver rubs it in our faces. We’re not being very consistent, but I’ll leave that point open to debate.

Other than your personal stand on whether or not the bust was offensive, it’s how we reacted like infants that caught my eye. Even that wouldn’t faze me too much normally since we all know how the gaming community can be. However, this time is different for one particular reason. This frothing of the mouth and knee-jerk, quick wit with no further thought came from the very crowd that would pretend to be different — those who make the sensible, adult remarks about how we need to evolve, accept each other, and so on. I don’t know about you, but I’ve never been taught that acceptance needs to be shoved down my throat and that if my opinion is wrong, I need to be snuffed out. That sounds like the reverse of accepting anyone for their good or lesser opinions and ideals.

How does acceptance work in Riptide’s case? It made a provocative piece, so it needed to be shut down. Well, all this media outrage worked as Deep Silver issued an apology the same day about how appalled it was by its own behavior. This must have struck the team by surprise, and so it should because it did nothing out of the ordinary. It marketed its product with cheap attention-grabbing as anyone else in any walk of life does. No, not in our gaming community — we’re fighting for equality in here, so there’s no room for that.

That last sentence doesn’t work. You can’t have your cake and eat it, too, and then sue the baker for making you fat. At some point, this mass hysteria needs to end. Whatever happened to disagreement? “I do not agree with what you have to say, but I’ll defend to the death your right to say it.” Isn’t that how the enlightened philosophers thought about equality? There doesn’t seem to be any defending of Deep Silver. There seems to be only offense. What people are doing by projecting negativity on this campaign is calling for exclusive behavior that will allow certain things and disqualify others. That’s being part of the very problem you’re trying to fight. I’ll even leave out the fact that publications were quick to publish the news a second time with the apology because showing a bloody bust is so disgusting that you should do it twice, right? It can’t just be updated in the same article — that picture must be drained for all its juicy contents. Again, consistency is lacking.

Above: Perhaps just use your fingers.

However, the lowest of all points was not even this sad state of affairs. It’s that the dogs weren’t appeased with the blood on Deep Silver’s hands. Instead, they went after its personnel and showed the true nature of what it means to not know what you’re angry about. Some of you may know Maurice Tan from his time with Destructoid. He’s now an employee of Deep Silver, and earlier this week he tweeted an off-color joke about this ordeal. Seeing as I don’t want to actively feed the flames of other people’s misery, I won’t link it and instead just state what it said: “It is cut off, so who knows. S(he) might have a cock down there.” The response was immediately and overwhelmingly negative. I’ll post a screenshot here.

Do we notice a pattern here? It’s the same knee-jerk reaction — immediately going for the jugular in the name of equality. The community had choice words for Tan because his comment was deemed offensive and bigoted. Yet nothing in the tweet can be pulled any which way on that topic. There is no divide that would suggest a fixed view. Still, the immediate assumption is negative, and the reaction is downright hostile. It’s bullying in pure form, skewed on the platform of freedom of speech. It’s not offensive, but it might be, so let’s presume it is. It’s these same presumptions that the community should fight, not endorse. That was the straw that broke the camel’s back for me. The whole day this happened, I thought I’d elevate myself and not fume like I watched people fume about their delusions. I failed — we all failed. It was a bad day for gaming. We’re not welcome in our own world, so what do we do now?

Please, excuse the longevity and unfiltered approach of this write-up. Again, I’d like to state that this is my personal reaction, so it doesn’t come equipped with the necessary filters. It is still based on my belief and idealism, which is focused on inclusion rather than exclusion. Let me end this rant the only way the Internet knows how:

TL;DR: Judge not lest ye be judged. We didn’t fight for equality this week — we fought it. Deep Silver shouldn’t have had to apologize for endorsing freedom of choice, and the fact that it did has made our world smaller, not more open. We are all to blame.