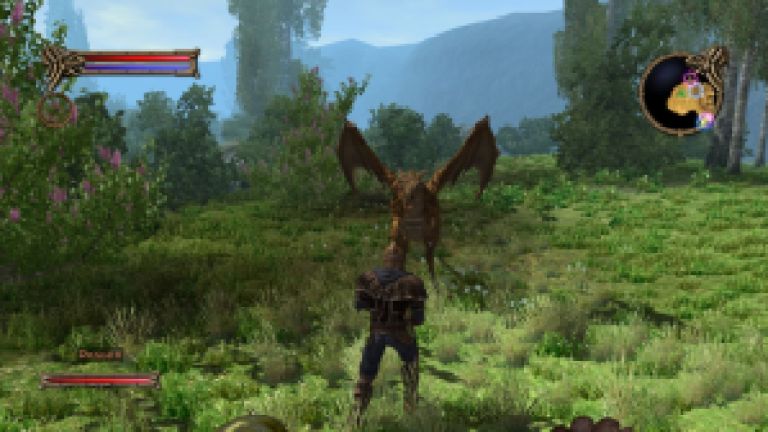 If you’ve not played Two Worlds on Xbox 360, you’ve probably at least heard about its atrocious frame rate and its none-too-awesome graphics. I don’t think any gamer or critic in his or her right mind would attempt to argue those points. However, if you did decide to pass up Two Worlds, I believe you missed out on one of the best Role Playing Games from this generation.

Two Worlds gets an unjustified bad rap on Xbox 360. I’ve played no other console RPGs this generation that’ve given me this much freedom to explore and customize my character while managing to keep my attention through the waves of quests and sidequests. As much as I’ve loved the Elder Scrolls over the years, I actually believe Two Worlds is more fun to play.

Maybe that’s because the combat system feels more natural and actually works from the 3rd person perspective. No, the combat system in Two Worlds is not perfect and if you play it now, it will feel dated. But it is functional and I had a lot of fun experimenting with diverse skills, abilities and spells made availalbe by the rich leveling and customization systems.

Leveling and customizing your character goes much deeper than simply putting points into the standard Strength, Vitality, Magic and Dexterity categories. There are 38 skills that you can develop. And with no known level cap, you could literally spend hours mastering almost all of them. It’s rare when a western-style console RPG actually gives you this much freedom to develop your character. Most RPGs I’ve played from this style enforce a strict level cap that deterred me from building a truly unique character that fit my particular play style. This was quite possibly what made me love Two Worlds the most. I also loved how Two Worlds allowed you to stack weapons and armor to make them stronger. You will find hundreds if not thousands of weapons and armor sets as you play thru the game. Being able to stack duplicate weapons and armor pieces made loot mongering that much more enjoyable.

Exploration in Two Worlds is outstanding. The world has very diverse terrain ranging from lush bamboo forests to barren deserts and wastelands. One of the gripes many gamers have with the Elder Scrolls series was the lack of action or combat while traversing the world map. This is not so with Two Worlds. It felt like there was a wolf, orc or bandit camp around every corner just waiting for you to ambush. Factor in the excellent weapon and armor stacking I mentioned above and you finally have a huge open world that actually encourages you to explore beyond just completing quests. I often found myself not wanting to shut the game down late into the night, hoping to explore just one more cave or to loot just one more house to find another sword or breastplate to stack onto my existing setup.

So about those horrible visuals? On 360, Two Worlds’ developers decided to focus less on graphical fidelity and more on the little details that make an RPG so immersive:  The outstanding soundtrack; the ambient noise of birds and other animals in the wilds; the muffled and metallic voices of the mages from the Silver Circle wearing iron masks; that tangible sense of danger as you step into the Dead Forest for the first time underleveled and vulnerable to one-hit kills because the developers did such a wonderful job balancing the combat regionally; and the lore delivered by NPCs that gives Two Worlds its soul (yes, even with the sometimes terrible writing).

For all Two Worlds does right, there are some other misteps besides the bad visuals. The morality system comes to mind immediately. I appreciated the ability to sneak into someone’s house and loot their stuff. What I didn’t like was how inconsistently I was caught doing so. Even completely out of sight, I’d still have home-owners chasing me down with swords because I ganked something on the 2nd floor of their house when I had no indication they could see or hear me. Couple that with the fact that the city guards seemed to always want a ridiculous sum of money to let me off the hook and you have a system that needed better balancing.

Given my high praise for the leveling and customization systems, I’d be out of line not to mention that the re-spec system is broken. Attempting to make sense of how it works left me confused, disappointed and missing several $1000s of dollars.

The story is also a bit disjointed when delivered through NPC dialog. Quest givers would sometimes give me a quest to assassinate someone and then close the convo by saying things like, “Tell me what you find out.” And if you miss some of the key NPC convos – which is entirely possible because they are not mandatory to push the story forward – you’ll not really know why the major events in the plot are even happening. And as is common with many other western RPGs, the ending flat out sucks.

Overall, Two Worlds was an outstanding game wrapped in a horrible 1980s prom dress. I felt that the nay-sayers could not get past their lust for beautiful graphics long enough to notice its gorgeous features beneath the surface (in their defense, the frame rate did nearly make my eyes bleed). But, If you can get past its awkward façade, there is a wonderful game to be found lending you more freedom to play your way than most console RPGs on the market.