Recently, yet another warrior for social justice (AKA someone on the internet) decided to voice their dissatisfaction with something in the ever-so-harmful world of art and fantasy. The character known as Tiny Tina — a psychotic 13-year old girl from the videogame Borderlands 2 — apparently went a little overboard with her Ebonics. And though the majority of others privy to this accusation didn’t exactly agree with it, the artist receiving that criticism eventually did.

Tiny Tina’s writer, Anthony Burch of “Hey Ash, Whatcha Playin’?” fame, was quick to defend his arguably harmless creation, yet he eventually considered revising her character entirely … all due to a few sources of petty discouragement.

Such a willingness to appeal to the overly sensitive minority is not only stifling to the young world of interactive entertainment and the endless potential it retains, but it also keeps the artists perpetuating the medium from harnessing its greater qualities. 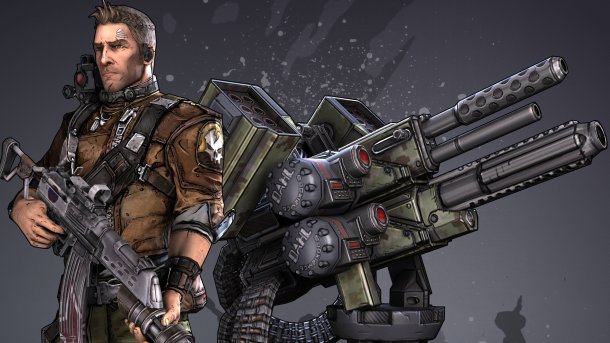 Interpretation is variable, therefore it’s a poor argument. Axton’s turret fires “slag” bullets and is known as “the missus”.

Context and variety be damned

Think of videogaming as yet another color palette. The idea of that boundless medium reflecting and projecting every possible compilation of hues is an enticing one. To obtain that reality, though, those with brushes must have access to every possible pigment and shade available. An expressive person’s greatest enemy is restriction, whether it’s in the form of physical/technological inadequacy or a non-contributor on the side saying, “No, that has got to go.”

As I’ve said before, art and entertainment are harmless, and that’s what makes them so miraculous; we can experience incredible and horrific events with almost no side-effects. So when people selectively find things to be outraged by, and even equate them with negative, vitriolic terms (racist, sexist, etc.), it’s not only biased in the face of everything else one could deem corrosive, but it also completely undermines the contextual value of that subject.

Games, or any other source of entertainment, are nothing more than a multitude of moments — small pockets of information that build up to a greater experience. Isolating any bit of that information forces a disharmony with the rest of the piece. Tiny Tina is a flamboyant, juvenile, and sometimes annoying character … in a game that retains those same traits. It even uses the now-improper “midget” on a regular basis. It’s amazing how one can miss such a correlation when focus is exclusive to that one character.

Borderland’s 2 is a goofy (and sometimes dumb) game, but it’s not really trying to be anything greater. And even if I don’t like this particular title, I can admire that quality. Videogames should aim to be every bit as stupid, offensive, filthy, ingenious, inspirational, and pristine as possible. That way, we know everyone has something fit for their tastes, and such a variety can provide admirers of the craft with as many experiences as possible.

I’ve stated this so much that it’s practically burned into my retinas: If you don’t like a piece of entertainment, leave it alone. Many of us would much rather have everything that videogames can offer (clean or ugly), rather than what makes you comfortable or adheres to your self-centered bubble of “appropriate content”.

Maturity is not only a matter of the material portrayed, but also our ability to handle it. (Warning: NSFW)

To Anthony Burch and all others in your position:

Try to show a little backbone. Though your ultimate goal is to appeal to as many people as possible, you can’t please everyone. If you allow yourself to be driven by that goal, you’ll end up with nothing more than an empty shell of expression … a white canvas on the wall of some “modern art” museum, completely unchallenging and inoffensive.

From what I know, “journalistic integrity” is to lack compromise for the sake of the facts. It’s to present information as it is, not how others want it to be. These traits are no different for the integrity one must retain as a creative writer, film director, game designer, musician, and so on. If you let outside forces muffle your voice (or worse, change your words), it becomes less of a pure product of your imagination and more of a product, in general … like a Chicken McNugget. And few people admire the heart and craftsmanship that goes into a McNugget.

Art and entertainment have become so commercialized that they are now often confused for services. With any service comes a sense of entitlement, and people feel they’re owed a comfortable movie-going or gaming experience in the same way they have a right to a deli sandwich without hair or body parts in it. This is one of the many obstacles that every artist must deal with, no matter their medium. Unfortunately, not enough creative people exercise their right to say, “If you don’t like my work, go away.”

Do this and I promise you’ll be respected as a principled entertainer … or else blend in with the rest of the fry cooks behind the counter.

A lot of people protested American Psycho and the book that inspired it. Many of us are happy that nobody listened.

If your creations are messy to a few, keep them that way. Some people like it filthy and unfiltered because it’s proof of authenticity. The world isn’t clean, and if art is going to continue reflecting this imperfect place via its most effective methods, be it through shameless humor or gritty realism, it’s best not to heed the infantile wines of those who want that reflection to conform to their own narrow views.

Most individuals who relish the opportunity to condemn fantasy don’t think too deeply on the matter or consider the implications of their outrage. In the process of declaring what is and isn’t acceptable, they affect creators’ abilities to not only express themselves in a true fashion, but to also portray discomforting subjects with the intention of conveying just how awful they really are. The irrational cries of would-be do-gooders can result in artists second-guessing themselves, causing them to withhold material altogether, rather than expose how beautiful or ugly it is.

I know nothing about cars, therefore I don’t bother trying to convince a professional racer that he or she is using the wrong tires. Philosophies like these should encourage people inexperienced in any field to hold off on their uneducated knee-jerk conclusions, as well as professionals in those fields to take the words of the former with a considerably large grain of salt.

Otherwise, we all risk driving a boring Prius that constantly suffers dead batteries and blowouts.