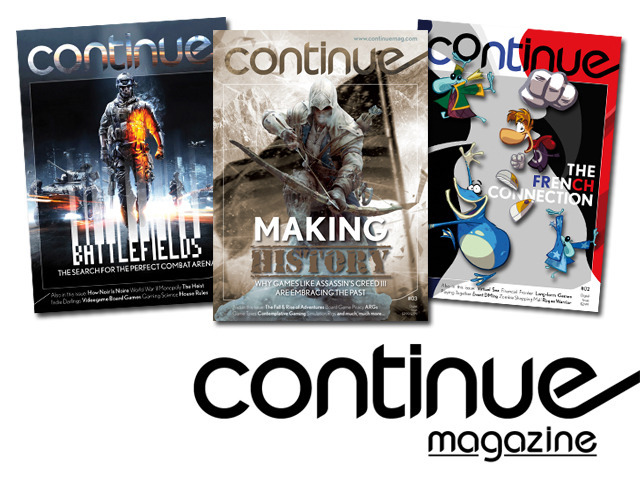 Continue, a small U.K.-based games magazine, turned to Kickstarter this week in an attempt to fund another year of its quarterly publication. What separates Continue from other publications is its slant on covering “gaming rather than just games,” but with an industry already awash with print, online, and digital magazines, will it succeed in reaching its £50,000 target ?

A quick count reveals that there are some 11 well known and mainstream U.K. and U.S.-based print and digital publications alone that cover the gaming spectrum as a whole and culture (Edge springs to mind immediately) — and another 12-plus online games industry and culture sites such as Kotaku, Joystiq, GamesBeat, and 1UP. So there’s plenty around for everyone. This doesn’t cover the hundreds of smaller independent sites and blogs. On top of this, Continue’s quartlerly publication cycle may sound a little slow in an industry where there is always something going on, but it counters this by saying on its campaign page, “We’re really proud of the quality those first three issues showed — proving that a features-first games magazine really could work.” Could … .

It’s not the first time that a publisher has forgone mainstream and taken a more high-brow and intelligent look at the industry. In 2009, Jamin Brophy-Warren, a former culture reporter for The Wall Street Journal, created Kill Screen and charged an eye-watering $15 an issue. The first set of issues quickly sold out, and Time stated that the writing was so polished it would help convince doubters that games are worth taking seriously. From that success, Kill Screen has grown into a digital publication and and maintains the expensive print edition.

While many of us turn to websites for a quick daily dose of gaming action, reviews, and news, there does appear to be a niche market for mature reading on the subject, and Jamin knew this. The success of Continue’s Kickstarter campaign doesn’t rest with reaching a goal — it depends on the editorial team creating the same impression that Kill Screen did: that games can be taken seriously and that they matter. They are an essential fabric of future society as the pressures of reality demand a conduit of release. Not only that, but games are becoming integral in our schooling system and the workplace. Minecraft, for example, is being used as a teaching aid for physics, town planning, and architecture, and the application of game mechanics and engagement in work and business has led to “gamification.”

The games industry as a whole is constantly evolving, and publications need to evolve with it. And perhaps because of this, there is room for one more magazine to remind us of that.