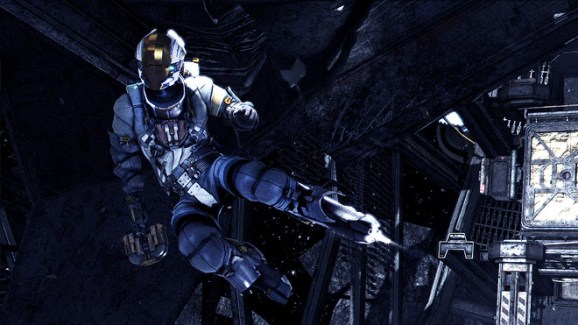 I just got to Chapter 4 in Dead Space 3, and I’ve got to tell you — even as someone who played through the first two games multiple times, played all the spin-off games, and watched both of the animated movies, I just don’t get some things. Let’s start from the top.

And yes, there will be spoilers.

This is the part that’s bugging me the most. Dead Space 2 ended with Isaac and Ellie flying off into the sunset, heavily implying that the next game would feature the two as a Bonnie and Clyde-style duo, hunting down Markers and bringing the fight to the Unitologists. Dead Space 3 is not that game.

It opens with a weird little prologue set 200 years before Isaac’s time that doesn’t make a lot of sense, but hey, maybe it’ll click later, so I’ll withhold judgment for now. Then it switches to Isaac, two months after the events of the last game, who’s apparently retreated already from the Marker hunt and lost touch with Ellie. Oh, and he’s behind on his rent. It sounds like EarthGov has been reduced to a single squad, Unitologists are now in charge, and both sides want Isaac. The EarthGov sqaud gets there first and drags Isaac along by telling him that Ellie needs his help. They give the Unitologists the slip, fly out to Ellie’s location, and find her, and she gives one of the EarthGov soldiers a slip of her tongue in front of Isaac. That’s where I stopped playing for the night.

What is going on? This is nothing like what I would’ve imagined a sequel to Dead Space 2 to be. It feels like I’m playing Dead Space 4, the sequel to the Dead Space 3 that should’ve existed — the one where everything goes wrong for Isaac and Ellie, causing a disillusioned Isaac to retreat from the mission and the world at the end.

The biggest problem is with that two-month time frame. Think about everything that has to happen in the two months between the second game and this one: Isaac and Ellie have to embark upon and fail so miserably at both a mission to destroy the Markers and a romantic relationship that he exiles himself. EarthGov needs to collapse, and the Unitologists need to rise up in its place. Ellie has to get involved with the EarthGov soldier. Oh, and Isaac needs to get behind on his rent. In two months.

Now, I think it’s safe to say that in general, Isaac is a pretty unlucky guy. But when it comes to money, he’s the luckiest guy in the galaxy. He’s constantly finding spare credits everywhere he goes. The guy trips over credits on his way to the bathroom. So how is he already behind on his rent? It’s only been two months.

So yeah. I have no idea what’s going on so far.

This is the other big problem with the story so far: I don’t care about anyone involved. Everybody from the prologue is dead, Isaac has nothing going on and just yells a lot, the EarthGov guys are all assholes, the new Unitologist supervillain has barely been introduced yet, and Ellie’s too busy getting busy with one of those assholes.

Who am I supposed to be rooting for?

Dead Space opened with an emotional video log from Isaac’s girlfriend, which instantly established a sympathetic link for both of them. You got introduced to his crew, the interplay between their personalities, and the immediate danger they were in. Dead Space 2 opened inside Isaac’s mind, showing how haunted he was from the events of the first game — how fragmented — once again creating sympathy for him before throwing him into more danger.

Dead Space 3 opens with someone I don’t know or care about and then switches to Isaac, a guy I barely recognize anymore given the substantial story gap since we last left off. He’s withdrawn from the very fight that I willingly jumped back into by buying the game. And now he’s surrounded by dumb military brutes who only rope him in by invoking Ellie’s name — whose relationship with Isaac (and by proxy, me) has been severed since the last game.

So again, who am I supposed to be rooting for?

The first enemies Isaac fights in Dead Space 3 are just faceless dudes in armor taking potshots from behind chest-high walls. “Crouch behind cover by pressing R3,” the game tells me. I’m sorry, but when did Dead Space become Generic Cover Shooter?

In January, Arthur Gies of Polygon sat down with Steve Papoutsis, the executive producer of Dead Space 3, and asked him, “What’s the basic gameplay foundation of Dead Space that you’ve needed to be careful to not screw up or not change too much?” Papoutsis answered, “It’s really always been about strategic dismemberment.”

OK, Steve, then why am I hiding behind cover and using a submachine gun to shoot dudes in the face? This is not why I come to Dead Space. Leave the chest-high walls and headshots for Gears of War and Mass Effect.

I’m not saying that fighting humans in Dead Space couldn’t be awesome. Dead Space 2 had a fantastic scene where you fight humans by not fighting humans. Instead, you barely escape, and then you unleash Necromorphs on them. It’s awesome. But let’s say you wanted to have a scene where Isaac actually fights humans. Well, it should be a scene so brutal that it makes me cringe. Shooting another human’s leg off from the knee down with a plasma cutter shouldn’t kill him — it should leave him on the ground, screaming in agony and clutching what remains of his limb. Necromorphs don’t react in pain when you cut off a body part, but humans should.

And yet, that’s not what happens here. Blow a guy’s leg off, and he just dies immediately. It’s boring and totally contradictory to what the series has “really always been about,” in the words of its executive producer.

All right, stop me if you’ve heard this one before. You walk into a room and slowly make your way through it. On the floor, you find a lone Necromorph in pristine condition — well, in as pristine condition as a Necromorph can get, anyway. When you get close to it, the Necromorph jumps up and attacks you. It was never actually dead! It was only pretending! Who could have possibly foreseen this? Oh, noooooo!

Actually, you’d think Isaac Clarke would have foreseen this, having already gone through it twice before.

In the relatively short time I’ve spent with Dead Space 3 so far, the game already tried to pull that specific trick on me with three different Necromorphs in the same room. But I’m a Dead Space veteran, so that just doesn’t work on me anymore. If I find a lone, pristine Necromorph on the ground, I shoot it from a distance. Chances are, it’ll spring up and start charging at me, but I’ve already gotten a head start on dismantling him on my own terms.

Now the developers mix it up by hanging Necromorphs from the ceiling like bats, all balled up and ready to pounce. Except that that trick already doesn’t work on me because the first time they do it, it’s in a cutscene, and I know to look out for it.

The game needs to come up with new ways to scare me — and fast — because this just isn’t working. I can walk into a room and tell just by the layout that enemies are going to jump out and from where. I’m prepared any time I solve a puzzle for the inevitable rush of enemies afterward. It’s boring. And yes, I’m playing on Hard, so it’s not just a matter of not being scary because the enemies die too quickly.

The game just put me on an abandoned ship where some real nasty stuff went down, though, so I’m hoping it’ll start feeling more like Dead Space and get better from here. But these early hours have not been encouraging.