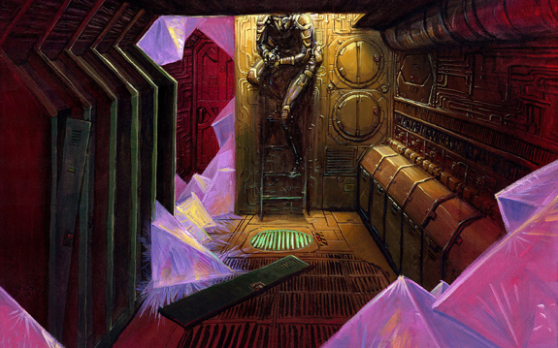 If you haven’t heard at least a little bit of commotion about it, GOG.com just got the first digital rerelease of one of the most celebrated PC games of all time. System Shock 2 is more than just a popular title for PC gamers, though. It’s probably one of the most important games in relation to today’s console landscape as well.

If you ever enjoyed contemporary games like BioShock, Deus Ex: Human Revolution, Dishonored, Dead Space, or Fallout 3, then you probably owe it to yourself to buy System Shock 2. The current console generation has seen the popularization of what some like to call the “first-person simulation role-playing game” genre — games like the ones I just mentioned, which combine elements of first-person shooters with RPGs in extremely detailed worlds. SS2 definitely did not invent this style of game (that credit probably goes to Ultima Underworld), but it’s usually considered to be the best example of it, and I would agree.

If you still don’t really know what SS2 is, it is the direct predecessor to BioShock, having been made largely by the same team. The first Dead Space game also probably owes its existence to SS2 (rumors abound that it was originally going to be System Shock 3). Now, some might take this to mean that SS2 is a less advanced version of BioShock or that it’s only interesting to play as a history lesson on where BioShock’s ideas came from. However, SS2 is largely considered to be the better game, and I would also agree on that.

PC elitists might tell you that BioShock is basically the same game as System Shock 2 but dumbed-down for console gamers — or that SS2 has much deeper gameplay and is still scarier despite outdated graphics. That stuff might be true in a manner of speaking. BioShock is definitely a much more action-focused game. SS2 has almost the exact same gameplay mechanics, but it is balanced much more heavily toward role-playing and survival horror.

At the beginning of the game, you choose a general development path for your character: guns, hacking, or psionics (basically plasmids). You can dabble in all three if you want. Experience points are either discovered as items or doled out for completing objectives (this even has a strong connection with the story), so you can’t grind, and you really have to watch where you spend them.

This goes into SS2’s heavier emphasis on resource management. Unlike BioShock and more like Human Revolution, you have an actual limited inventory in SS2, and it seems like resources are almost always scarce, especially later in the game. There were several points where I was sure I’d wasted too much to have a chance at beating the game and nearly decided to start over. I think it was that feeling of constantly being on my last reserves more than anything else that made every enemy encounter scary in this game. That’s what a survival-horror game is supposed to do.

It would not be a stretch to call SS2 a Resident Evil RPG on a space ship, and people who miss the original structure of that franchise might want to give this game a chance, too.

However, there is one reason above all others why I prefer SS2 over BioShock — how much better the former is at immersing players in its world.

People lauded BioShock for presenting its world to players in ways that console gamers had never seen, but I still think it fell a step short of its predecessor mainly due to the way it handled its heads-up display and conveyed information to the player. BioShock did it basically the same way every game does these days, but that’s exactly the problem with most games these days.

When a character calls me over the radio and tells me where to go, I don’t need the game to then give me an objective marker on the map or a waypoint arrow. If I need to be reminded of what to do, I can just refer back to audio recordings. I don’t need the proper object or switch to glow in front of me — not when the in-game environment is as well realized as BioShock’s.

In SS2, you get some orders over your radio describing a place and a goal, and you look on your map for that place and simply go there. Signs and other descriptors that would guide any normal person in that environment are enough for you to find your way. Developer Irrational Games and Looking Glass Studios managed to create a world in SS2 that feels so natural and lived in that you can navigate it as if you were really there.

Every time I talk about SS2, I like to talk about the one moment that totally sold me on the game. There’s a section where you need to modify a computer by replacing a circuit board. After a voice recording tells me the registration number of the board I need, I go find the room where it’s supposed to be, expecting a small room where the correct board is the only movable object. What I get is a massive library — several stacks filled with circuit boards, each one able to be picked up and placed in my inventory. When I had to look at the registration number of each individual board until I found the right one, I said to myself, “This isn’t a collection of levels anymore. This is a real place.”

SS2’s entire world is built like this. BioShock’s is too, but the difference is that the newer game covers that well-realized world in a bunch of assistance icons instead of trusting the gamer to immerse himself in it. Oh, BioShock lets you turn most of that stuff off, but not enough of it in my opinion.

Ultimately, what these kinds of games are all about is immersion — building not a series of levels but rather something that feels like an actual simulated environment, with a story that takes place entirely within that environment. That’s why people call them “simulation RPGs.” When it comes to that task, I don’t think any game has done it better than System Shock 2.

If you’re timid about loading up what may look like such a complex PC game — or maybe you’ve heard some stories about the complexities of running it — you really shouldn’t worry.

For starters, no one should worry about getting this to run on their weak laptop or whatever. SS2 was built for 1999 computers; I’m confident that any Windows system built within the last decade will run it without issue. There were issues with getting it to run on modern versions of Windows, but the latest GOG release just cleared all that up. Basically, anyone should be able to buy the game and start playing without a hitch.

Don’t try to play it with a controller, though. The inventory system alone ensures that ain’t gonna happen. The whole game is very reliant on having a mouse.

All those things you see now for things like “rebirth” or “SSTool” are just mods to improve the game beyond the original release. You don’t really need that stuff unless you want the graphics looking a little bit better.

Oh, and SS2 has four-player online co-op through the main storyline.

Lastly, if you actually do check out SS2 and like it, then you have little-to-no excuse to also check out the original Deus Ex (which also has a PS2 version available on PSN), Arx Fatalis (from the guys who made Dishonored), and the Thief games (which a lot of people say Dishonored ripped off).

And no, you don’t need to track down the original System Shock before playing SS2. The story mostly stands on its own, and the original SS game doesn’t hold up nearly as well from what I hear.

Originally posted on the blog MultiPlatform.