Bioshock Infinite was one of my most anticipated games of last year (and this year since it’s been delayed). I was already pretty hyped after the reveal trailer, knowing how much I enjoyed the original, but it was the lengthy gameplay snippet from the Electronic Entertainment Expo (E3) 2011 that made me unable to contain my desire for the final product (if you still haven’t managed to see it, I advise you do so now). After I saw the demo and a video showing off some of the voice-over recording process, I knew that I needed to go into media blackout until the game’s release. This is something I will often do with games I really want to play. The less I know about them, the better.

A few days ago, I received the latest issue of PC Gamer. I saw that Bioshock Infinite was on the cover and immediately knew I was going to avoid reading about it. While flipping past the article, I noticed something about one of the images (pictured above). It showed Elizabeth, the character you presumably escort around for most of the game, just standing in a shop. What caught my eye about this image was that the outfit she was wearing was entirely different from the one I remembered from the demo.

Why would I notice something this small? Well, if you’ve seen the outfit she was wearing in the E3 demo, you would know why it stuck in my mind. It was a blue dress that was quite over-the-top with the amount of cleavage it revealed, especially considering the time period in which the game takes place. In the PC Gamer image, she was wearing a much more modest white shirt that fit her character much better. It took me entirely by surprise because I hadn’t seen anything from Infinite since the middle of 2011. 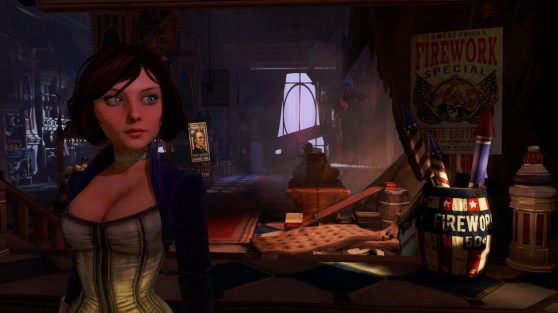 I was pleasantly surprised to see that this had changed. Elizabeth seemed like a very interesting character in the demo, but her outfit had always been a bit of an annoyance to me. I’m not saying that displaying cleavage or femininity is a bad thing; it just seemed glaringly out of character for her — even from the little we actually know about her design. It almost felt as if the outfit was meant to appeal to the large segment of males in the audience. Ken Levine, the creator of Infinite, didn’t seem like the type to let something like this be in his game, so it seemed very odd at the time.

This makes me wonder if the change was a response to the forum chatter about the Elizabeth’s design around the time of the demo’s release. I know that I wasn’t the only one who thought the outfit was a little unappealing and distasteful. Others wanted it toned back as well, and it would seem that Levine listened to us. Of course, this could very well just be a costume change that happens partway through the game, but I’m not so sure. I wouldn’t be surprised to see that this is just the new design for Elizabeth for the entirety of the game because it fits the idea I have of her so much better. If this is the case, I applaud Levine for making the smart choice to change the outfit and doing so in a way that speaks more strongly to the character wearing the outfit. I feel this sets a positive precedent for the industry at large.

I really hope other developers notice this design choice and try to implement it into their future games. All too often, I’ll play a game where a female character is dressed in a way that obviously doesn’t fit her personality and just seems like it was meant to pander to the large male audience. I can’t count the number of times I’ve seen poor design choices, like stealthy spies wearing high heels or hardened warriors wearing midriff or cleavage-exposing suits of armor. It breaks my immersion in the world and insults everyone by saying we like this kind of thing. It is entirely possible to design an outfit (or even armor) that is both appropriately feminine and doesn’t seem out of place in the world the character inhabits. Fire Emblem: Awakening does a great job of this. All the women wear armor that covers them entirely and also emphasizes their beauty and character. It is possible to have it both ways; it just takes a bit more creativity and work. 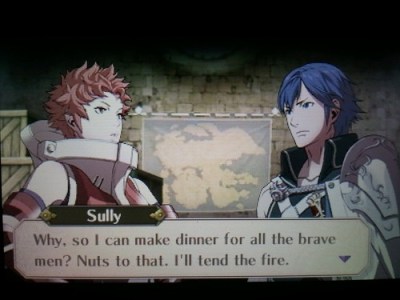 As someone who already has a bit of trouble immersing himself in a video game’s world, I really appreciate developers that make intelligent decisions to ensure that outfits make logical sense in the world the characters inhabit. I’m not saying there isn’t a place for crazy designs; I just think that those types of costumes belong in a game that suits them better. Take Bayonetta — with her absurd high heels and costume made from her own hair. Even though she looks ridiculous, her outfit fits that world and her character. That’s all I want from my games. Creativity shouldn’t be squelched, but I think more developers should pay attention to the different pieces of their world so that everything fits together logically and doesn’t ruin the vision they originally had in mind.