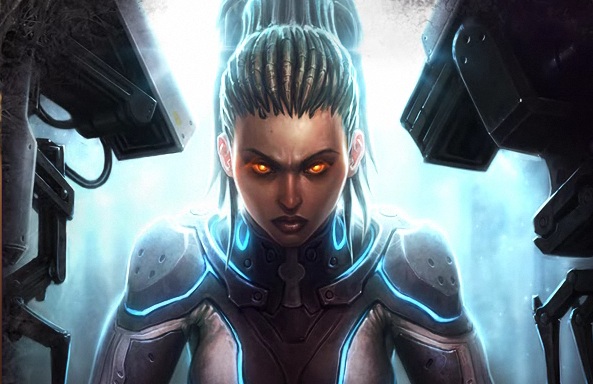 As Daniel Shannon of GameSpot so succinctly put in her official review of StarCraft II: Heart of the Swarm, the “absurd story makes the original Starcraft seem like Shakespeare.” Unfortunately, she isn’t exaggerating. Heart of the Swarm tries so hard to suck you in, but the story is just so far-fetched that you almost feel like your intelligence is being insulted. Here are five reasons why Chris Metzen, lead writer for the StarCraft franchise, is slowly ruining his reputation.

1. Jim Raynor and Sarah Kerrigan are apparently in love and always have been 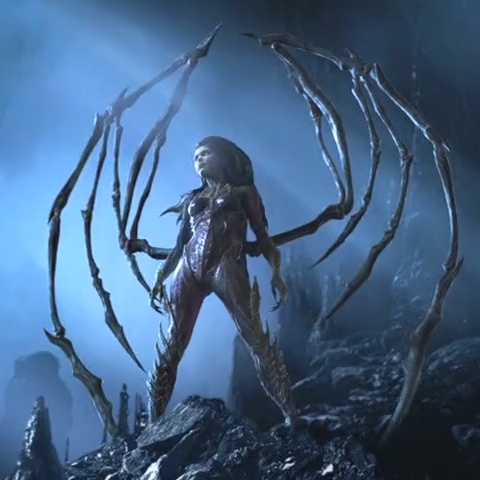 Above: Jimmy’s just so into her.

The first time Raynor meets Kerrigan is in mission five of the Terran campaign of the original StarCraft (titled, “Revolution”), and Arcturus Mengsk betrays her in mission nine (titled, “New Gettysburg”). You can count the number of times Raynor and Kerrigan have conversations of any kind in those five missions on two hands. After that, it’s pretty much Raynor just trying to avoid being killed by her — right up to the end of Wings of Liberty, StarCraft II’s Terran campaign. Not exactly the sort of situation that makes for great chemistry.

At some point in Wings of Liberty, Hyperion Battlecruiser captain Matt Horner implies that Raynor and Kerrigan slept together, but this is almost certainly a retrospective cop-out so that Raynor’s mission of love would have some more heft. In fact, when you think about it, the spark between the two star-crossed lovers was never developed at all. Yet somehow (and against all odds, of course), Raynor loves Kerrigan enough that he’s okay with her Hitler alter-ego. It’s like she finally reached a genocidal threshold he just couldn’t resist. To make matters worse, the first time the two of them kiss, ever, is in Heart of the Swarm. 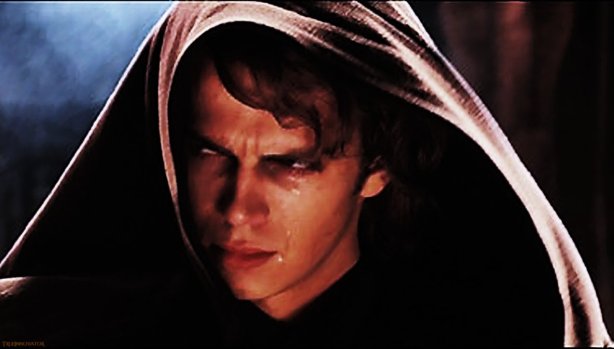 One of the greatest downfalls of Star Wars Episodes 1 through 3 is that Annakin’s descent into darkness is contrived. This brings me to my second point.

While Kerrigan’s first fall from grace is forgivable because she was sort of being mind-controlled by Amon (a being of an ancient, cosmic race who’s bent on remaking all life in his image), her second fall from grace is just downright annoying. She is no longer being mind-controlled, she has genetic manipulator Abathur, as well as primal Zerg DNA, which should imply that she doesn’t have to stay a Zerg the second time around if she doesn’t want to.

In fact, the player is fed this belief in the hopes that once she finds Raynor, she might change back to her human form. After all, the most emotional moment of the story comes at the close of the first act when Kerrigan thinks Raynor is dead. This fuels her desire to kill Mengsk, but once she actually finds and saves Raynor, she chooses to keep going after Mengsk, anyway! The love story loses all its momentum, and we, as players, are left to wonder why Kerrigan cares about killing Mengsk more than she cares about Raynor. If anything, it just reinforces the fact that the love story was weak to begin with because we totally get why she would choose revenge over Raynor. She’s the frickin’ Queen of Blades! Stay away from her, bro!

3. After finding out that Amon is the end-all bad guy, Kerrigan decides to keep going after Mengsk, anyway 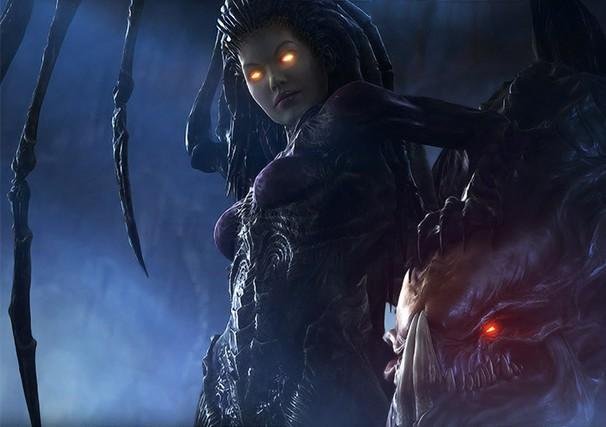 Above: “That’s right, little Zergling. Mengsk has been a bad, bad boy.”

If I were Kerrigan, I would be pretty heated at Amon. I mean, he only brainwashed me and made me kill eight billion people. Or wait, was I just having a bad day?

What doesn’t make sense is that Kerrigan decides to go after Mengsk even after finding out about Amon (the former turned her into a Zerg, which she sort of digs, while the latter made her slaughter eight billion people. Decisions, decisions). The whole point of Heart of the Swarm is that it’s sort of a redemption story, and we’re supposed to like Kerrigan more than we did in Brood War. But instead of doing the right thing and going after the guy who’s about to tear the universe a new one, she tells Zerg broodmother Zagara that she’s going to go after Mengsk, and that if she dies, Zagara should take over for her. In other words, Kerrigan is ready to leave the fate of humanity in the hands of a Zerg broodmother who wants to kill everything instead of taking on that responsibility herself. Messed up, eh?

4. Stukov is a Zerg, which serves no purpose at all 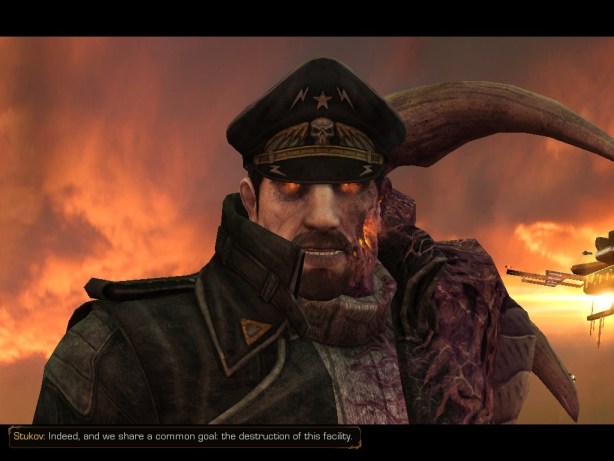 Why is Stukov in this story? What does he contribute? The problem with the non-human cast of characters surrounding Kerrigan is that they were all Zerg (which I’ll get to later), so they had to all be different and have their own personalities in order to remain interesting. But then we have Stukov, who was also betrayed by Mengsk. Not only were we glad he was killed in Brood War, we also didn’t really care. His resurrection isn’t even really fan service. He’s just annoying because all he thinks about is revenge. Kerrigan’s already been doing that for the entirety of both StarCraft series.

5. All the characters that Kerrigan has deep conversations with are Zerg — every last one of them 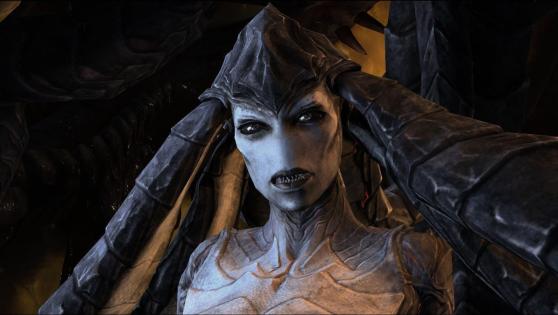 Above: “Can we be friends, my Queen?”

This was the greatest failing of the writing in Heart of the Swarm. The whole reason everyone loves the original game — aside from its groundbreaking real-time strategy gameplay — is because it has a great, consistent tone. The Terran were backwater, backstabbing space hicks whose ranks were filled with prisoners. The Protoss were a noble, enlightened race guided by honor. And the Zerg were monsters. The ones that had enough IQ points to speak with Kerrigan in StarCraft were undeniably evil and vile — just the way we liked it.

When Chris Metzen decided to wipe Amon’s taint from the Zerg and give them all personalities, he did the worst thing to his story he could have possibly done. He made the Zerg lame. These feral, unstoppable, mutating beasts that were way cooler than Halo’s Flood could ever hope to be suddenly turned into confused teenagers. Izsha is a groupy, Zagara is a hater who wants to fit in, Abathur is a classic introverted programmer with no idea how to talk to anyone, Dehaka suffers from obsessive compulsive disorder, and Stukov is an angry Russian. While they should have all been interesting enough characters on paper, they really weren’t in practice. Probably because none of them were convincing at all.