Like it or not, the age of the plastic instrument was never going to last. After burning perhaps a bit too brightly over the course of the last decade, Guitar Hero and its ilk fizzled out in 2011, passing their collective torch to a lone survivor: Harmonix’s Rock Band series. For a long while, we watched in awe as Harmonix continued to float a sinking ship, playing catch-up with the spectre of an industry that just didn’t exist anymore.

So it’s no surprise that this week, with the addition of Don McLean’s “American Pie” to the library, Harmonix is taking its leave from the franchise. After more than five years of weekly downloadable content support, Rock Band is no more, along with the genre it helped make popular.

Melodramatic? Maybe, but I suppose my desire to eulogize plastic instruments speaks to the effect they had on me. Ever since that first horrific failure playing “Free Bird” on Hard, I’ve been a loyal devotee of anything vaguely molded in the shape of an instrument — whether it be a drum kit, a microphone (come to think of it, those things are real), or even a set of turntables.

Hundreds if not thousands of hours and banknotes later, I suppose a healthy question to ask myself is, why?

Aptly enough, when the first Guitar Hero released, I was actively concerned with that very question — albeit from a different perspective. “This isn’t a game,” I would have said at the time. “Why would anyone want to play a fake guitar?” I had once touched a real guitar, and by that virtue, anything less was a gimmick. It was only with the release of Guitar Hero II that I began to warm to the obvious appeal of the rhythm genre and its cabin-fever approach to the discovery of music — not to mention that it let me outfit my avatar in dungarees and rock the virtual globe to my heart’s content.

If anything, my sudden change in attitude only stood testament to the genre’s prevailing problems with identity. Ridiculous as their premise may be, plastic-instrument games are so conceptually obtuse that it’s easy to get caught on the surface — so involved with watching YouTube videos of “Jordan” on Expert difficulty that the real substance gets lost.

Which perhaps explains why, when Rock Band entered the plastic-arms race back in 2007, it was held in a vacuous space known only as the rhythm genre, which was seemingly absent from design talks and the medium at large. The disparity between note highways and traditional 3D spaces had become so vast that the genre no longer aligned with common interests. It became a self-contained entity, sitting on the sidelines and quietly amassing a small fortune. Consciously or otherwise, the “this isn’t a game” thinking had inherited some truth.

It’s only now, after the genre’s removal from the limelight, that I feel like I can understand Rock Band as a video game and not as a gross amalgamation of its expectations. It seems so obvious now, but at heart, it was a class-based multiplayer game — one that set the stage for concepts as familiar as microtransactions and community integration long before they hit the zeitgeist. In retrospect, Rock Band should have been vital to discourse on multiplayer game design (if not game design as a whole), yet very rarely did it transcend conversations about gimmickry and longevity. Although it predicted and mastered market trends en masse, Rock Band’s design went unsung even as it rode through a perfect storm — setting, following, and bucking trends as it became the sole survivor in a notoriously saturated marketplace.

I can imagine some eyes rolling as I write this, but from within the constraints of the rhythm genre, I feel like we failed to notice the real nuts-and-bolts appeal of Harmonix’s work. It’s easy to assume that the physical qualities (your specific interactions with the controller or the friends you play with) are what makes Rock Band so enjoyable, but this ignores the fact that the game’s mechanics are never far from sight.

Rock Band’s emphasis on the interaction between band members distilled the plastic instrument down to its fundamental principles: social interaction and showboating. Like any good multiplayer game, Rock Band specialised in social engineering. It led players into a mindset conducive to the game’s interests and used this to orchestrate a shared experience, one with a competitive undercurrent.

In Rock Band, songs as docile as The Foo Fighters’ “Doll” become running gags against the drummer while the painfully difficult swings of Malmsteen’s “Caprici di Diablo” become a means of putting the guitarist in his place. Series favorites like “Green Grass and High Tides,” on the other hand, are all-hands-on-deck co-operative ventures — sprawling tests of endurance defined by the players’ collective ability to avoid severe cramps. It’s a dynamic that creates an inclusive social space and only furthers the desire to play on and engage with those around you, if just because you have something to prove.

Then, of course, there’s the meta-game — the desire to get better not just to climb the leaderboards but because the vocalist wants a new toga. The bassist wants to try to buy some self-respect. The drummer wants enough money to see the band’s logo, a flying set of male genitalia, printed on the front of a solid gold drum kit. Once you’re hooked, the focus is no longer on the controller. The systems are deep, layered, and above all, balanced enough that you’re never just playing another rhythm game; you’re on a campaign as valuable as that of any traditional blockbuster.

Ultimately, from a design and marketing standpoint, Rock Band rarely compromised when it came to letting the player have fun. It became an entertainment platform unto itself, and as such, created a DLC and purchasing model that worked to the tune of one billion dollars years before the likes of Dead Space 3 and Sim City struggled to get their own ideas off the ground.

Elsewhere in the industry, iteration has grown to carry a bitter taste, yet here, it served as the vehicle that kept a sprawling franchise relevant for over five years. Whether Harmonix was conscious in its decisions or not, in Rock Band, we were given a taste of where the game industry was going — executed with a success and confidence that few developers manage even to this day. 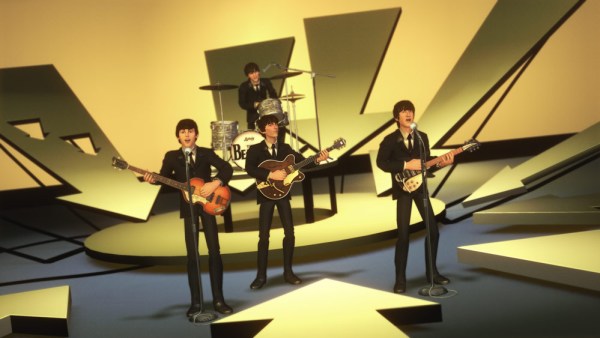 If I go back to my question of why, the answer is obvious. It may be tempting to define Rock Band by its surface interaction — by the promise of embodying a world-famous rock star or discovering new music. But peel back the facade, and Rock Band held on for so long because it valued good design above the cheap promise of the plastic instrument. Whether people realized it or not, that translated into a loyal fan base for years to come.

“Be a rock star” was always going to be a hollow venture. Harmonix saw depth in an otherwise ridiculous marketplace and led the charge not just for the genre but for the medium as a whole. From a consumer perspective, Rock Band will be remembered as a great piece of software, independent of the hardware that shaped it. And if the continued growth and prosperity of Harmonix is anything to go by, it didn’t do too badly for the developer, either. In the end, it’s only fitting that the company should be able to pull the plug on its own terms.

We shouldn’t lament the demise of the plastic instrument but instead the fall of a franchise that, despite racking up more than 5,000 playable tracks, made a firm statement for quality over quantity.

Here’s to you, Rock Band.