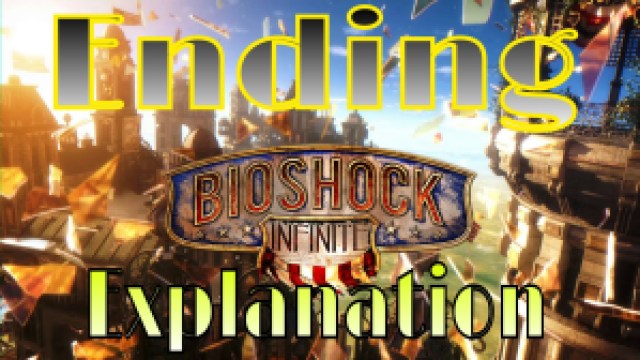 MASSIVE SPOILER WARNING: Do not, under any circumstances, read on if you have not played and finished BioShock Infinite. Everything about the game is spoiled below and discussed in-depth. You have been warned!

Here’s another view of the artistry of BioShock Infinite.

OK, so I noticed a lot of people are confused about the ending of BioShock Infinite. Admittedly, the last 25 minutes throw a lot at you at once, and you don’t really have enough time to process it or make much sense of it all.

I also want to point out that this explanation is also an actual explanation of the ending. I have seen many people explain the entire plot in detail — which I will also be doing — but they all seem to brush over exactly what the ending means and how Irrational leaves things off. If you watched past the credits, you should know what the true ending. But if you didn’t, you will no doubt still be a bit confused. Basically, what I’m trying to say is: Don’t worry; everything is explained here — not just the plot but the actual end and its context, too, so if you want closure, then I guess just read this.

I’m still unsure of a couple of things, but these aren’t massive plot points that really matter, and either I just missed something or they are actual minor plot holes that weren’t explained in the game properly.

So, let us begin. At the beginning.

Booker Dewitt, the player’s character, has been entrusted with the job of going to Columbia to rescue a girl, Elizabeth, and bring her back to New York. Apparently, this deed will rid Booker of all his (gambling?) debts.

After blasting off into Columbia, Booker goes about trying to get to Elizabeth, who’s locked away in a tower. Before he can reach her, he receives a telegram telling him NOT to pick number 77. He ignores it, not understanding what it means. He then sees a sign showing off a somewhat devilish hand with the letters “AD” printed on the back of it. These letters (AD) match the letters imprinted on the back of Booker’s, hand.

After going to watch the Columbia raffle on his way to the tower, Booker is told to choose a raffle ball, which he does. It is number 77, and he wins the raffle. His prize is getting to throw his ball at a couple of tied up Columbians — one white, one black. After going to throw the ball, Booker’s hand is stopped by a police officer, who reveals him as the false shepherd. Now Booker must fight through hundreds of people just to get to Elizabeth — and hundreds more to try and escape Columbia.

After he finds her, things become pretty straight forward; escape this city in the sky.

It isn’t until near the end that the plot heats up again. Before we go into this though, we need to take a look at Elizabeth’s “tearing” power.

Oh, off topic but it is also important to remember she has one of her little fingers missing.

Elizabeth received this tearing power after the Lutece’s twins experimented on her (she did not naturally have this power). The twins had previously made machinery that could open tears. After these experiments, Elizabeth could do so without any help.

Tears are basically otherworldly things. Other dimensions. A open tear can bring in something from another world — or you can enter an entirely new world. However, and I stress this, new universes or items can’t be created from scratch. They have to already exist for them to be brought into either the current world or accessed in their entirety.

With Elizabeth’s power out the way, let’s move on.