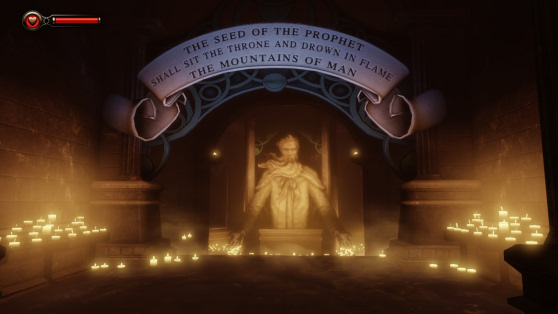 When Booker was first faced with choosing the baptism, he declined. He then went on to have a baby. Obviously, this decision created another dimension in which he had accepted the baptism, in which case he then became Comstock and went on to create Columbia. Both Comstock and the original Booker existed within their own dimensions, doing their own thing. However, after Comstock needed an heir but couldn’t have a child because he was infertile, he used the Lutece’ twins tearing machine to take Booker’s own child, Anna. Technically, because Comstock is Booker but just in another world, Anna is still biologically related to him. Booker actually sold Anna to him to pay off his debts to him, and I know what you are thinking: Isn’t there just another reality for if he hadn’t sold her? Well, yes — but also no. Because Comstock wanted — needed, in fact — Anna so badly (and it could be only Anna because she was the only child related to him) even if Booker hadn’t sold her, Comstock would have entered Booker’s world and taken her by force. There is no world, while Comstock existed anyway, where Booker and Anna stayed together.

Booker was caught in a never-ending cycle of trying to save his daughter. He had already been to Columbia over a hundred times before. This is proved when he is in Columbia and asked by the Lutece twins to flip a coin. He does, and it is heads. They mark it on a chalk board under “heads” and you see that heads is marked more than 100 times. No tails have been marked down. This means that Booker has been there over 100 times before, flipped the same coin and, as always, had the same outcome. While you can choose, during the story, to kill someone or let them live, that is a choice (no doubt another world is created to accommodate the other choice you had) and not chance. Flipping a coin is chance. He already flipped the same coin every time he had been to Columbia before and, as always, just like all the events there, it was scripted to heads.

Back to where we were before. It didn’t matter what happened; he would always end up where he was. It was impossible to avoid. Because Booker had a daughter and Comstock needed her and he made their dimensions cross and he took her, there were no other dimensions with a different outcome. Every world Booker existed in ended up with him losing Anna and going to save her. A never-ending loop.

However, it does end, here. After Booker accepted he needed to die to kill Comstock, he allowed Elizabeth to kill him. By killing himself at the point in time where he accepted the baptism, he killed off any possibility of a Comstock. Comstock never existed. Comstock never came and took Booker’s baby, and Columbia was never built. Anything Comstock had an effect on or had anything to do with was destroyed and never happened.

This is where a lot of people lose it. They think Booker, Comstock, Elizabeth, and Columbia all died, but they didn’t. Booker didn’t kill himself when he was first born; he killed himself when he turned into Comstock. All that did was kill off any Comstock version of him that there ever was.

After the credits, there is a little, tiny section, where Booker wakes up in his apartment and hears Anna crying. He goes into her room and calls out “Anna?!” That is where the game really ends.

This little part backs up what I am saying.

Because only Comstock was killed and stopped from ever existing, the Booker that declined the Baptism still existed. However because Booker and Comstock’s worlds crossed, all parts of Booker’s life that included Comstock or anything from the Comstock dimension itself was removed from his life. There were no Lutece twins who came to collect his daughter, no Columbia, no Comstock, and no adult Elizabeth in his, or any other, dimension. Ever. He then went back to the last time in his life that was free from Comstock-related madness: Booker in his apartment with Anna as a baby before he met Comstock.

Now people may come back with “But Elizabeth disappeared from the scene after drowning Booker,” and while this is true, it makes sense — and is also one of the most depressing parts of the game despite its happy ending. Elizabeth in that form never existed. The girl you went through the entire story with? She never existed. Anna is Elizabeth, but because every outcome of baby Anna’s life was to end up in Columbia with Comstock in that tower and grow up there, when Comstock died and everything he had done and had effected died with him, the adult Elizabeth also went. There was no adult Elizabeth in any other dimension that Comstock wasn’t in. Because he was in every world she was in, when he died, the adult Elizabeth died too, leaving only baby Anna. This means that while Anna will be free to live with Booker, she will never turn into the same person. She will never be able to open tears, as that was an ability given to her by the Lutece twins in Columbia. She may never be able to pick locks (why would she need to learn to do that?), and a lot of her personality that was influenced by being in Columbia will be different. She will never be Elizabeth. She will always be Anna, a completely different human than the one we got to know. So, in a way, Elizabeth did die. That, to me, is a very depressing thing indeed, as Elizabeth was an incredibly crafted character and the best female portrayal in any game I’ve ever played.

Here’s another quick thing to note, something players may mention: Why did they even bother to stop Comstock? Why not just change what had happened by going back to old memories and parts in time through those lighthouses? The thing is that they can’t. When you go back to previously, already, made memories, you can only relive them — you cannot remake them. Booker couldn’t go back and choose to run off with Anna, because his decision to sell her was made, and he must go through with it even if he went back knowing it was wrong. Even in an alternate reality where he didn’t sell her, Comstock still came to steal her away.

Now, the only slight odd thing about this is: if it isn’t possible to change already made memories and situations, how did Booker allow Elizabeth to drown him and kill off Comstock if that isn’t what happened? Well, while Elizabeth was not in his memory, and could not effect proceedings to do with other people, you’ll notice she can still touch and interact with Booker. So while her control over the scene is limited, she can kill Booker in that scene herself and end it there.

So, there you have it! Ask any questions you want in the comments and I will try my best to answer them!

If you want a summary of what happened minus the confusing shit: Comstock was Booker in an alternate reality where he didn’t decline the baptism. Comstock took, either by force or through buying, Booker’s daughter, Anna (also Elizabeth). Booker went on a cycle of trying to get her back that never ended and always ended up the same. In the end, he let himself be killed at the point where he turned into Comstock, and thus everything “Comstock related” died. He became himself in his last pure, Comstock-less memory, which was him with baby Anna.

P.S: A quick note I forgot to mention: The AD on Booker’s hand stands for: Anna Dewitt. Comstock foresaw Booker coming now doubt because he knew he would try and get his daughter back because he never wanted her to leave.

Since writing this ending explanation, I have since written a new piece answering many recurring questions about BioShock Infinite’s ending. This can be found on my blog (address below or in my GamesBeat bio) so if you have any questions check out that article to see if I answered them!

Thanks for reading and remember to check out my blog (michaelthekyle.blogspot.co.uk) for more exclusive content including the BioShock Infinite Q&A, and follow me on Twitter @mookyst.