There are some really horrible implications to stomping on a Goomba.

Yes, he’s working for the villain, and yes he will kill you if given the opportunity, but his arsenal is limited to walking back and forth and praying to Goomba Jesus that Mario accidentally bumps into him. Goombas never really stand a chance. For the sake of making your next Mario experience a slightly more unpleasant one, take a moment to ponder the default method with which Mario dispatches this most common of fodder: He crushes them to death. The relatively helpless, brainwashed foot soldiers of an evil empire (an evil empire whose principal interest is the kidnapping of underage girls) is unceremoniously crushed to death by an overweight Italian in tacky overalls.

But that’s only a problem if you have an imagination — one that is getting less of a workout by the day as modern games march toward total realism. What if, in a gritty reboot of Super Mario Bros. (which will be titled Super Mario Bros. but will have a far more hardcore font), each Goomba you stomped had an expression on his face. A personality. Sweat beading on his forehead as Mario approaches with his black eyes alight with murderous intent. In a flash of recognition just before he’s stomped to death, you can almost see the Goomba well up with thoughts of his wife and kids — of the life he was forced to leave behind when King Koopa initiated the draft. Then, all at once, his innards are spilled in a geyser of blood and sinew, a wild-eyed Mario laughing hysterically as he grinds his steel-toed boots in a lifeless pile of offal. 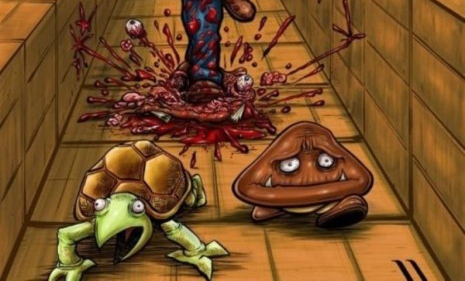 Above: I swear to you, I wrote the preceding paragraph before I found this image.

Well, that escalated quickly, but I think I’ve made my point. The more realistic video games become, the more difficult it will be for gamers who aren’t sociopaths to evacuate the life force from wave after wave of enemy combatants. What was easy in 8-bits will be impossible in … how many bits are we on now?

Empathy in a gameplay environment

Empathy is not a subject that is often raised in relation to the psychology of video games. Positivity doesn’t sell as well as outlandish, poorly researched accounts of violent video games turning an entire generation of your children into mindless killing machines. Upbeat is far too boring. Though in the academic community, such discussion is gaining ground, and research is now unearthing the positive aspects of video-game play.

(While there are many research studies, such as this one, that espouse the positive effects of video games on cognitive functions such as the ability to track multiple moving objects or multitasking, they aren’t relevant to today’s discussion.)

Take this study from Stanford University. Participants played through a scenario in which they are to deliver insulin to a sick child before a timer runs out. Half of the group played as a superhero who could fly, and he other half of the group simply rode in a helicopter. (This is not unlike any number of missions in commercially available games.) Just after they finished playing, the researchers knocked over a cup of pens, and those in the superhero group (that had played the game and experienced being a hero) all helped the researchers pick up those pens. Six of those in the helicopter group did not.

And we have another from the University of Innsbruck in which participants played either Lemmings (which researchers categorized as a prosocial game) or Tetris (categorized as neutral). They were then told stories ranging from Paris Hilton being arrested to tales more easily empathized with, such as a man being robbed of $60,000. Those who had played the prosocial Lemmings were less likely to feel schadenfreude in relation to the Hilton story and more likely to have empathetic feelings toward the man who had been robbed.  In the course of this study, researchers managed to prove, once and for all, that academics have better things to do than watch TMZ. Paris Hilton is so 2006.

You’ll note that both of those studies concentrate on “prosocial” gaming experiences and not the “antisocial” experiences to be had in Grand Theft Auto or Call of Duty. Though I honestly don’t see what’s so antisocial about beating a hooker to death in an alley to get your money back. Excuse me, I need to make an appointment for something. It totally doesn’t rhyme with shmyshmoligist. 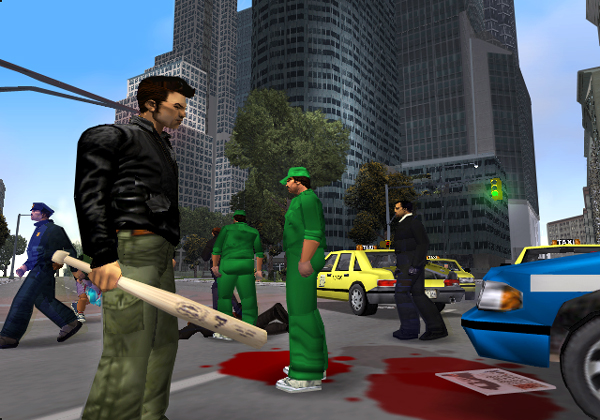 Which nearly brings us to the point. Hang on, this might get “academic.” I know, I know; here’s a gif a kid getting hit in the face with a soccer ball. Feel free to check it out and then come back for the less-than-exciting conclusion. Let me know how much schadenfreude you experience. We’ll write a study.