Recently, an old Destructoid affiliate of mine, Allistair Pinsof, essentially “outed” a transgendered game developer, Chloe Sagal, for misleading Indiegogo supporters to fund her sex reassignment surgery by referring to it as “lifesaving.” Tragically, we now know what she meant. But that’s not what I’m here to talk about. I don’t have all of the facts, and enough has already been said on this subject.

What instantly draws my gaze toward these oh-so-common floggings is the most common factor: those carrying the whips. Like clockwork, they labeled Allistair “transphobic,” demanded that he be punished, and seemingly dusted their hands off for what they perceived was a good deed. This is not the first time they’ve done so.

Ironically, they are the biggest proponents for positive change, yet they seem so consistent with their own negative behavior. Their usual approach is far from persuasive, and is even potentially damaging.

An eye for an eye, if you will. 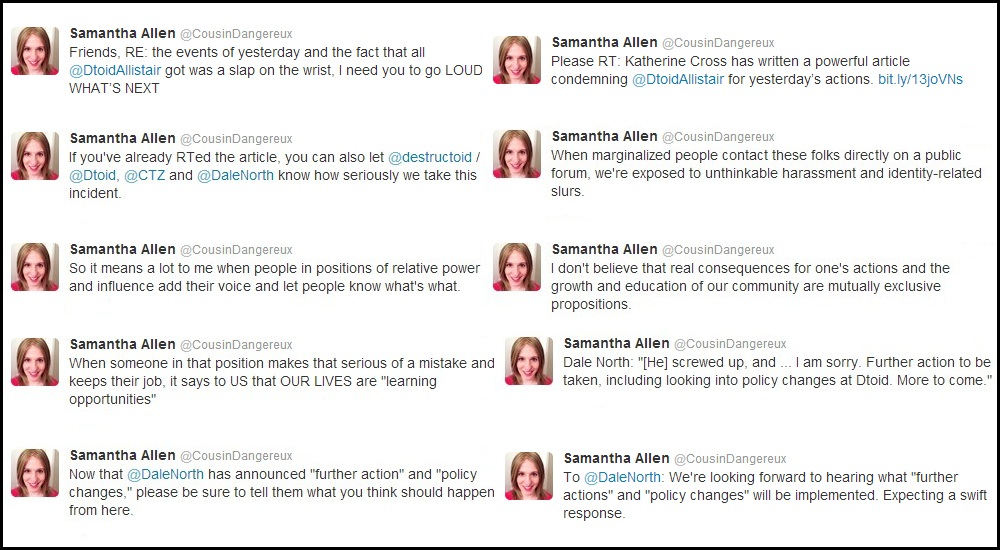 Though her passion is understandable, to call this “excessive” would be a bit of an understatement. And she’s not the only one.

Back in the Felicia Day…

I can’t really avoid pointing this out here: In the past, I made a stupid mistake on Twitter that cost me my career and a lot of respect. Similarly to Allistair, I had a significant (and somewhat unjustified) amount of hate and criticism hurled my way. I admitted my poor actions, and also accepted much of what resulted from them, but it made me raise a brow toward similar instances of public scrutiny that others have faced.

Leaving my own experience out of the equation, I looked to others whom were “burned at the stake” for their trespasses, both minor and extreme. In the process, I made two inquiries: What is the intended goal of those with torches, and what lesson are the ones aflame supposed to learn? Not enough people ask these questions. In fact, too few individuals even bother considering every potential result when it comes to their actions, particularly those convinced that they are doing something noble or good.

It’s a damn shame, because some of the worst offenses anyone can commit are often perpetuated by God, “justice,” and a personal sense of absolute morality.

Nevertheless, those two questions remained, and the answers I found are as follows:

Got drunk. Said something stupid. Apparently, I hate and mistrust women. News to me.

1. Concede, you piece of shit!

Disagreement is almost always accompanied by a desire to persuade. The main reason we enter debates, discussions, or arguments is to potentially convince someone to see things from our point of view. Even those who present their case with exposed teeth aspire to have the opposition kneel before their passionate conviction.

Many people seem to forget two things: Opinions are only worth the amount of thought that goes into them, and a part of getting others to consider them is a matter of presentation. Yes, the “tonal argument” is indeed a logical fallacy, but let’s be real: People don’t like being spoken to like they are inferior … or evil, in this case.

Your argument is your product, and you are its salesperson. No matter how compelling and valuable your commodity may be, if your sales pitch consists of vilifying language and a condemning regard for your hopeful customer, they will not feel inclined to give two steaming shits about what you’re selling.

When people stumble — myself, Allistair, and even greater authorities like David Jaffe and Jim Sterling — the goal is to make us learn from our mistakes, but what do we learn if the lesson is delivered by a figurative bat to the head? Treating offenders like dirt not only gives them a reason to ignore you, but it can also reaffirm their original position, as well as reinforce any negative preconceptions they had about you and your case.

Do you want to know how to gain a valued, loyal customer?

I was raised in Bakersfield, California. For those who don’t know, “Bako” is quite conservative … and a bit of a shithole (see the following music video). This, coupled with a Christian upbringing, meant I retained a relatively non-existent knowledge regarding gay people.

I don’t hide the fact that, when I first moved to San Francisco nine years ago, I was genuinely homophobic. I hadn’t a single clue about how to feel or behave when it came to gay men and women. I didn’t hide it then, either. Given my inquisitive nature, I was open and honest with gay people when it came to my devoutly religious beliefs, what I was taught, and my confusion regarding their sexual orientation. Considering my exposed Christian tattoos, I couldn’t hide it, even if I wanted to. All I desired was to gain some perspective, some understanding.

An odd thing happened, though. The gays I spoke with weren’t angry. They didn’t despise me for knowing so little about their ordeals. They didn’t lambaste me for being raised to believe that their way of life was wrong or immoral. They heard my case, considered my misinformation, and carefully answered with some of the most valuable and level-headed responses that I’ve ever been given in my life.

Due to their kindness and patience, I was sold. I had absolutely no excuse to be repelled by homosexuality or the issues it faces in this country, and I never will. Though I’m no longer religious, I can’t help but feel a sense of amazement that people could go through such trauma, yet never bother to use my past faith and upbringing against me.

So many of them (particularly gay women) were incredibly grateful that a straight, white male would actively desire to learn what it meant to be a gay American, and I was equally thankful that they didn’t scold me for not knowing in the first place.

For several years now, the gay community has had one more supporter because of it.

Was insulted. Said something insulting and stupid back. Hated and mistrusted women. Has always loved Jonathan Holmes.

The paradox of shelling a munitions factory

It’s not difficult to understand how some can feel so hurt that they resort to armed retaliation. But to fire back at the “bad guys” is to equalize the battlefield. In that instance, villains and victims become grayed. Treating anyone like they are subhuman is equally as deplorable as whatever behavior may have instigated it.

This industry certainly has its issues, and I dare not deny that its transgendered, gay, and female members have and will face an unfair amount of problems. But their target demographic — those who do not fall under the three aforementioned categories — will rarely provide their patronage if the service being offered is laden with glass shards and caltrops.

We all desire for others to understand us. In the process, though, we so often become the new embroiderers of scarlet letters (“M” for misogyny). We claim to have the high ground, yet voluntarily remain in the piss-soaked dirt of the struggle below. That provides nothing substantial or positive to the games industry we claim to serve, and it perpetuates an even greater disconnect between social groups.

“Goodness” and “kindness” are not subject for debate, nor are they anyone’s to redefine. If you still feel that fighting fire with fire is a reasonable and justifiable strategy for extinguishing a societal blaze, then perhaps you should spend more time off to the side, watching the flames burn everything to the ground.