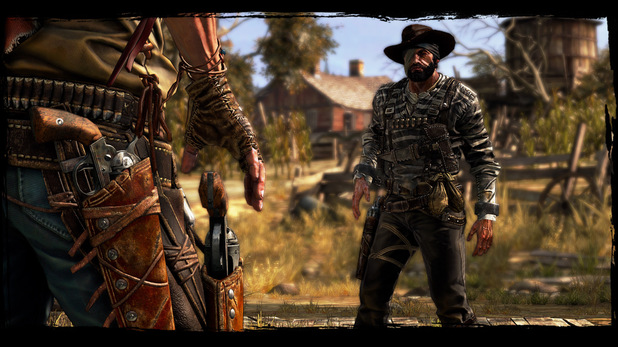 I wasn’t planning to write a post about this game because I’ve only played a few hours of it and it’s a short game so i don’t have much to say. But the more i think about it i at least want to say something!

I’ve seen a lot of people immediately assume it’s similar to Red Dead Redemption simply because it is a western. It is nothing like RDR! It’s a simple extremely fun arcade shooter. I think of it like those arcade games where you pick up and use the plastic zapper guns to play through, only in this one you control the movement of your character and don’t use a plastic gun.

The story is really neat, I like that you get to see a new take on very famous cowboys like Billy The Kid, Butch Cassidy, Sundance Kid and several others. You play the role of Silas Greaves who is telling his story to a group of people at a bar while playing poker or something.  I can’t say why exactly, but i felt pretty rewarded when i completed the game. It was a real decent story.

One thing that is mentioned in every review is how neat it is that while you play sometimes one of his listeners will correct him during his tale and say “didn’t you say… instead” and you hear the narration while playing the game and he answers along with something like “oh yeah” or corrects them back and the level you’re in changes up a little or rewinds to replay it differently. It doesn’t happen often enough to be distracting or ruin the effect, it’s almost perfect, i would have preferred a little more environmental popups cuz they were cool. There is quite a bit of witty banter over the story changes, very entertaining.

The graphics are one of my favorite things about it, it’s my kind of style tho. I’m an artist so of course i love this comic book style looking kind of stuff. They wont impress you, it’s not a technically impressive game but the artwork is beautiful. While the graphics in general wont impress, there are some very nice lighting and water effects. Not real looking water mind you, just very pretty and with some cool reflections. I love the flocks of birds you sometimes come across, they also look really great, just the animation as the flock moves through the air, i dunno, i liked it.

The gameplay is typical first person shooter stuff but in a comic book looking style. You don’t get very many gun choices but i didn’t have a problem with that, it was still really fun! There are a couple times you get to take control of a really big chain gun and slaughter away. You have your traditional rifle, pistols and shotguns and a couple different variations of each.

There is a neat talent tree that offers up extra features like duel wielding hand held shotguns. As soon as i saw that talent i was like “that’s the one I’m going for!” and i love it. =) Talents improve your reload time, slow-mo time, allow you to carry more ammo, minor stuff, nothing adds to special abilities really but it does add some extra flavor. There are three different talent tree’s with different focuses, one for each main weapon basically: the rifle, pistol, and shotgun. The further you get along in a tree you get a suped up version of those weapons available. There aren’t a lot of talents but there’s enough to give you reason to want to level up, and they offer up some good fun like throwing dynamite sticks back at your enemies or shooting them out of the air. Does that seem a bit redundant? Well i didn’t think it was that bad. =p Those talents are far from necessary and they don’t take long to achieve.

There are three game modes: Story, Arcade and Duel. I haven’t played Arcade or Duel just yet, i did jump into a quick match of Duel just to check it out. Duel is a 1v1 where you basically both fire at the same time (you can shoot early if you want) at the sound of a bell chime (no actual bell chime) you know, western standoff kind of thing. It’s a different mechanic than the typical point and shoot. You have a large reticule that you control with your mouse and it moves continuously as you try to position it over your enemy. The longer it hovers over your enemy the more it focuses to give you a better chance at shooting them first. It’s weird to get used to at first, i’ve pulled them off successfully but only to progress through the story. I liked those fights enough to look forward to playing some Duel mode. =)
Lots of players didn’t like it tho and they didn’t like to be forced into it throughout the campaign, they also said it was better in Bound in Blood but i wouldn’t know because i still haven’t played much of that one yet.

I haven’t played Arcade mode yet, i imagine the name alone is self explanatory tho. =p It’s got leaderboards for ya, so does Duel mode. There’s also a New Game Plus available so it should have plenty or replay value. I know i look forward to playing some more and filling out the entire talent tree and beating it on the hardest difficulty just for fun.

Sound Effects: I don’t have a real good memory on it right now but i know i loved both the music and the sound effects. I wouldn’t say the sound effects were realistic and that just wouldn’t make sense anyways since it’s a comic book stylized arcade shooter, they were just good, had a nice feel to them. For all i know they could be realistic, it’s not like i listen to those types of guns in real life or anything. Very nice with a pair of headphones on too.

Well i hope i gave you some insight and maybe some inspiration to play it. Thanks for reading!