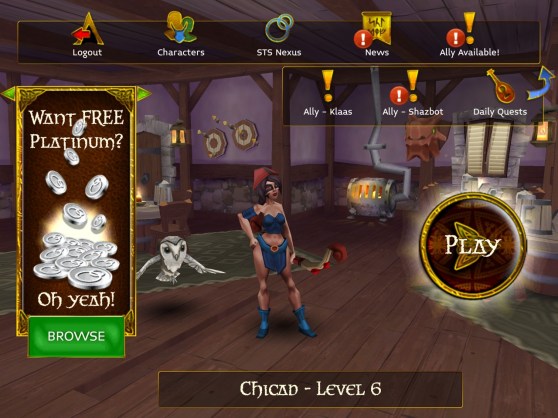 The freemium or free-to-play (F2P) business model is still new. Some early adopters have used exploits or tricks to squeeze money from their players while others created what we call a “pay-to-win” experience that practically guarantees victory if you pay money. These tactics may have generated a lot of revenue for developers, but as the market, business model, and expectations mature, players will accept them less and less. They probably won’t go away altogether, but it’s better to get ahead of the curve and start designing and executing smarter games today. Here are 5 examples of what not to do.

I know this was a popular tactic in Facebook games, but stop gating content based on the number of “friends” someone has in the game. Actions like “friending” or “making an in-app purchase” (IAP) should complement the experience, not be a requisite. Don’t hold content back from me until I’ve recruited enough friends. My assumption was that developers understood that friend-gating content would ultimately fail on mobile; however, I’m still seeing this in new releases.

Trick people into paying and sharing

Decay or extinction mechanics are widely used in freemium gaming. Decay and delay can be natural fits depending on the theme, but players have started to dislike the extinction mechanic, and it’s becoming less popular — especially if it involves something you can create a bond with, like a pet. How popular would Hay Day be if your animals died because you didn’t log in to feed them?

Another mechanic that’s potentially a deceptive business practice is making some buttons difficult to find or press. I’ve seen games try to hide Xs so people thought they had to purchase something or grey out buttons so they believed they had to “share” on Facebook to get to the next screen. Are these tactics clever or just misleading? There’s no right answer, but it’s probably better if it doesn’t involve money. Developers have to ask themselves whether they want to increase monetization through tricks or by making an awesome game that people naturally want to share or pay money for. Personally, I would think about what seems ethical and fair to your players.

Stop using intrusive, sloppy advertising solutions. I’m looking at you, banner ads! The first argument a developer usually makes is that adding advertisement solutions will cannibalize its IAP revenue. That’s true, but only if you don’t advertise intelligently. W3i conducted a study and blogged about it. Take the screenshot at the top as an example of how to advertise well.

People who don’t intend to pay have another way of giving back to the developer. Players who want to pay will continue to since they don’t care about advertisements, anyway. However, if you obstruct their view or clutter the user interface, then you could drive all players away. That’s why I’m not a fan of the “paying to remove ads” feature. You’re spamming your players and admitting it to them. It doesn’t have to be like this.

If you’re thinking, “But all F2P PvP games are pay-to-win,” I’m here to tell you that you’re wrong. There’s paying to win, and then there’s paying for competitive advantage. Take a look at this screenshot, for example.

Attacks range from 3-12 and defenses 4-9 for grinding currency weapons, but for a premium weapon … well, you only get 112 attack and 100 defense. This game is purely stat driven, so buying this weapon clearly allows you to beat everyone else, and there’s nothing a non-paying player can do to win against these players unless they pay, too.

Now let’s look at another F2P PvP game called PlanetSide 2. It’s a first-person shooter (for PC) where you can buy different weapons and vehicle upgrades with premium currency (station cash) — or you can grind to unlock them, but it’ll take some time.

Some are more powerful, have faster/slower reload speeds, and are more accurate or have lock-on capabilities for vehicles. However, just having a higher damage output doesn’t mean you’ll automatically win a battle. It’s the same with fire rate, reload speed, or any other characteristic because these stats only complement your natural ability to play the game. But wait … there’s more.

Each gun, class, and weapon has specific upgrades that can do a magnitude of things — like reduce recoil, grant more player health, improve class abilities, and add scopes or night vision. These class or weapon upgrades can only be purchased through the secondary currency (cert points), but these points cannot be purchased. You can pay to speed up the rate of earning them, but it’ll still take some time. Why is this important? Players can pay to get the guns that match their play style, but they can’t immediately deck out their weapons or characters with enhancements. Whether you like the game or not, it’s hard to deny that they executed a really solid F2P PvP experience.

Force players to pay to continue

I recently downloaded a new game on my tablet and was enjoying the experience until I ran out of energy and money (following the tutorial, mind you) a little over a minute in. I had three quests and couldn’t complete any of them or finish any action unless I converted. Delay mechanics, choke points, friction — whatever else you may call it — are common monetization mechanics in F2P games, and I’m not here to tell you not to use them. However, the most brilliantly designed games don’t encourage the player to leave while they wait them out.

Take Clash of Clans, for example. In order to improve my town hall from level two to six, it could take maybe 30 days. I can pay $5 for another builder and increase construction productivity so it only takes 20 days, or I could drop $100 (or $500) and get it now. This uses the same delay mechanics, but the game isn’t just about building a city and reinforcing defenses. That’s only half of the battle. The other half is about raiding other villages. The actual battles last minutes, and training basic armies usually takes 20 minutes or less. More advanced units obviously require more time to train, but you can be out raiding other villages almost every 20 minutes if you choose. This secondary mechanic or second core loop gives players something to do or goals to achieve while they wait for a building upgrade to complete.

Obviously, these mechanics can be the main revenue/marketing-driving mechanics of your game. I’m not here to say these will stop making you money. I’m simply saying that as a market matures, so will game design and player expectation. It’s better to start making smarter choices today so you’re not scrambling to change or squeeze the last pennies out of your game tomorrow.

If you’d like to talk about these or any other ideas, you can find me on my blog, the NativeX blog, or on Twitter.