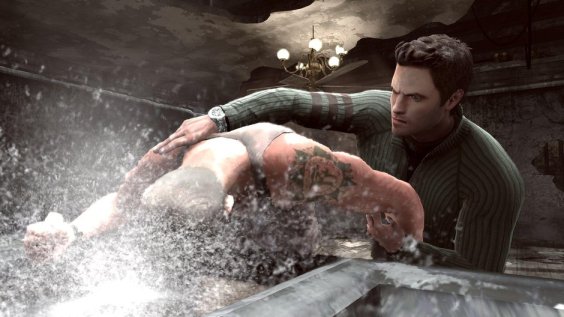 I’m glad they didn’t use Matt Damon’s likeness for the game. Same goes for most characters in the story. I did think it was funny that a couple of the assets did have their likeness put in though. I’m not glad for anything other than the fact that Matt Damon simply acted as the character, but if I were to read the book I doubt he’s who I would picture, that’s all, no biggy.

The combat is a pretty even mix between melee and shooting. There was far too much shooting through the game, I think the game should have been more stealth and melee based. I thought the controls were pretty decent for both which works out well because the gameplay is pretty bland. There were some super awesome moves though. You have a Take Down meter that builds up as you strike and defeat enemies. It builds up faster from headshots or silent take downs. The meter builds up pretty quickly so it allows you to do super badass fancy Take Downs pretty often.

The Take Down meter is capable of holding three charges. You press your take down button and you instantly defeat your opponent with a cinematic of badassery. If you have two to three charges up you can use that same single button press to take down two to three enemies at one time. During this cinematic you simply hit a quick time event button per enemy. If you miss the button you just don’t pull off the chain take downs but you do keep the meter charged if I remember right.

The Take Downs are good for both melee combat and shooting combat so as long as you have charges you will see a cool cinematic for either form of combat. They’re pretty cool and show off Bourne’s awesomeness. It’s all very cinematic.

The combat is really simplistic. Square to light attack, Triangle to strong attack, X to block and circle to use your Take Down. The thing about the melee combat is that you basically only have four combination attacks in total. Since at least half of the combat in the game is melee it’s pretty freakin dumb. But that’s where Take Downs saved it for me, thankfully the meter builds up pretty quickly. The combat is far too simple but at least it was super cool looking and quite entertaining. It also plays out like a boxing match, you don’t really do much moving around.

A major problem with the melee combat was also that if you’re under gunfire and you get close to an enemy, you automatically enter melee combat. So here you are entering melee combat with one dude while five others are shooting at you and you die and have to restart. Thankfully if you had a Take Down charged up you can waste it quickly on that guy and get your gun back out and back under cover.

The shooting was ok, you have to take your time with it, enemies shoot you down quickly and when you shoot them it doesn’t pause them for a second. They run around as if they don’t even know a bullet hit them, it’s actually kind of funny but also super annoying. Just take your time tho and keep behind cover and it goes pretty easy. The shooting scenes are definitely not meant to be fast paced. You can move around as you get used to it but there’s always going to be an enemy shooting you in the face so cover is basically necessary.

Small combat notes: -It has a shoulder cam switch, that makes me yay. -It’s hilarious to watch enemies flail their arms up in the air and continue to fire as they fall down dead. -The action is violent but there’s no gore.

Tanks and Helicopters Oh My!

You do “fight” a tank and helicopter boss during the game. The tank has these very obvious targets to shoot at that make it explode. You use explosions to distract the helicopter. Some of the stuff you do is pretty cool but it’s just not good gameplay. There’s a lot of stuff you do as Bourne in the game that I didn’t remember being in the movies. lol Fighting a tank? What? But the scene itself was cool. Everything plays out like it’s a movie and it looks good. It’s just not actually exciting. I had just assumed these parts were from the book but I have no idea.

I also thought the driving controls were also pretty decent. They weren’t perfect, it’s no racing game, but they were smooth and worked great for what you needed. I really liked the driving scene’s. They were kinda dumb, I mean the surroundings are basically the same as you circle the same small block over and over while pretending to lose the cops. I say “pretending” because it was insanely easy. Just don’t try to race. lol I thought the camera work was nice and the feeling of speed was pretty good, flat but good. If I remember right there was only one driving scene, but just like in the movies, it was long. haha

I thought it was very pretty! It’s obviously dated but a lot of it still looks really good. Character models aren’t so great and you do run into the same enemies but that doesn’t really bother me too much in a video game, I grew up with fighting the same enemy over and over. The backdrops were pretty nice.

Jason Bourne is a freakin badass, and you get to control him. The uncool thing is that the game assume’s you are already a fan of the series. If someone that hasn’t watched the movies or read the books played the game, they’d probably have no clue what is going on. I love mysterious characters but I would probably be pretty pissed at the game if I wasn’t already a huge fan of the movies. I suppose I shouldn’t be too judgemental about that, I mean it is based off of the movies.

Initially while playing through the game I thought they were adding some really cool scenes that were in the books but not in the movie. So I was pretty happy about that! The game is supposed to span over the movie trilogy or so it says. It’s possible that I just don’t remember some parts through the trilogy but as far as I could tell the game only plays through part 1. Even the ending of the game is the exact same copy of part 1. I tried to see if maybe each part of the movie played separately at the title screen once you finished one but could not find anything on it. As far as I can tell it’s just over.

I looked up the Wiki for it and even that says “it covers mostly just the first movie” basically. /sigh

If you’re a huge fan of the movies like I am then I think it’s worth at least a rental. It is insanely disappointing that it doesn’t actually span the trilogy but it was pretty cool to play as the Bourne.

Too much info on this one? Please let me know!