I decided to circle the outside area of the show, instead of trying to squeeze through the middle, looking for anything that stood out. The first thing I saw was a beautiful stage of Battlefield 4. There was an elevated stage with a single man on top in front of 8 large screens surrounding a huge one. It was glorious! I could see the line but I didn’t see how far back it went. Being Battlefield 4, I expected it to be pretty long so I moved on. I passed two or three booths that weren’t my kind of thing (something Disney, and World of Tanks or Planes), and came across an indie game called Randall. 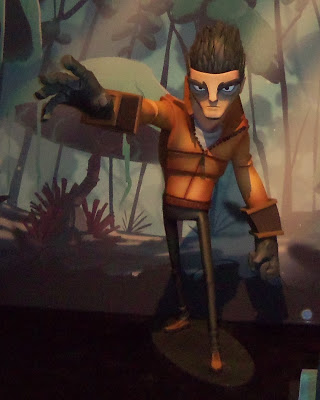 The 3-D statue of this game is what pulled me to the booth. I was happily surprised that the first thing I came across and didn’t recognize was something really awesome looking. There was a monitor display with a cinematic and gameplay demonstration. I really loved the art style. The CGI still had a hand drawn look to it, and the in game graphics looked like a living, breathing comic book.

The first guy I ran into gave me a little info about the game. I asked if the creators of the game were there. He pointed them out and offered to introduce me to them! Inside, I was like “no way!” I wasn’t expecting to get an introduction so easily. I got to talk to three guys who made the game, Mario Siller, Miguel Reyes, and Anton Ortega. I also got to talk to Francisco Chavez, of We The Force Studios. I forgot to get clarification, I don’t know if this is a developer/publisher mash up. There was only one studio name at the booth.

I spoke briefly to Mario Siller, one of the game programmers. He said that his favorite part of the game was the combat. He likes fast-paced action. I can relate.

Miguel Reyes, the main artist, worked on his own comic books and other video games before creating Randall. “Was there anything of your personality that you put into the game,” I asked. Miguel doesn’t speak English, so Anton translated for us. “Everything,” he answered. We all chuckled. I thought it was a perfect answer.

Anton Ortega, game programmer, contributed greatly to the design of the levels and gameplay. I spent the most of my time at the booth with him. He saw that I was taking notes and wanted me to have as much info as he could give me. 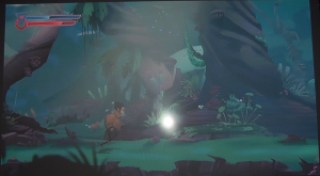 Randall is a 2D side-scrolling platformer, and, as I mentioned, the graphics are beautiful, especially considering the game is still a little over a year away. The themes of the game represent war, governmental control, greedy corporations, and how power corrupts.

The main story is focused on a small town where there is a strange and powerful mineral that can give people powers. This reminded me of Smallville so I couldn’t help but laugh. I love Smallville. Randall is a kid who was born with special powers but he just wants to be normal. However, he ends up fighting against the evil corporation because they thrust themselves into his everyday life.

Randall has a couple of really awesome powers. Firstly, he is super fast to the point that it slows down time for his enemies. “So he basically slows time,” I asked. “No, no, he is super fast!” Anton insisted. I don’t really see the difference when it comes to actual gameplay mechanics, but I was glad he cared enough to make the distinction.

Even cooler, Randall can enter peoples’ minds. In some levels, he can fight their fears, but more commonly, he has the ability to increase the fears of his enemies. In the game, as you enter peoples’ minds, the level will change. (This reminds me of Giana Sisters: Twisted Dreams and how the level backgrounds change in it as you switch between the two playable characters.) I love the whole concept of entering into peoples’ minds as a part of a 2D game mechanic.

Another cool aspect of the game is that you can choose to be good or evil: You can avoid your enemies or kill them. As you kill them, you may lean towards becoming corrupted.

I spoke with Francisco Sanchez from We The Force Studios last. I asked him how he met with the developers and what made them decide to publish the game. Turns out, he’s been friends with most of them for four to six years, and one since kindergarten! That’s a pretty dang nice relationship between the devs and the publisher. The whole team came from Mexico to be at E3 and show off their cool- looking game. It was really wonderful to talk to them and I definitely look forward to seeing more of this game. 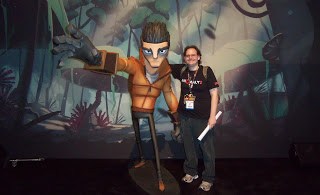