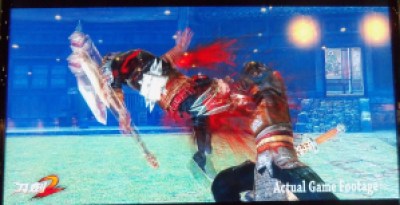 I was continuing my walk through the outside of the show, looking for all the hidden treasures when I came across a game that looked pretty neat. The booth was long and had some pretty art representing the game. There was a small table with pamphlets of information on their different games. It mostly consisted of a rather large monitor display. None of the displays were in English, though. I was fine with that; the game looked cool. So I was looking around the little booth trying to find some info when a lady approached me and started telling me about the game. Her name is Rui Zhou. She was super nice. She started explaining a couple things to me and I asked her to wait a second so I could pull out my notepad and take some notes.

I think that basically made her latch on to me. As soon as she knew I wanted to write stuff down, she perked up and was ready to go. The funny thing I found out was that the game that stopped me at their booth wasn’t even the game they were there to represent. Also, come to find out, the game they were there representing is only available in China! She was so super nice though and I really was interested in the game. I asked what the English translation of the game’s title would be. She was very apologetic about only being able to answer that with the letter “F”. I told her it was okay; it was not the first game I’d heard of with a single letter as the title. I imagine they would come up with an actual name if it was brought to the states.

She explained to me that the game I was watching was a third-person MMORPG with a focus on PvP and available PvE content. You could do 1v1 duels, all the way up to 100 versus 100 players. There are six classes, each with two branches of playstyle. All the classes have similar styled combat and skills but certain skills are enhanced depending on the class. It should enter open beta testing in October for both China and Taiwan.

Every NPC in the game is attackable, and you can even duel them for rewards. There will be “shadow bots” that basically allow you to fight other players’ characters even when they’re offline. It’s not the actual character though, but a bot representing them. You can earn the same PvP ranking from these bots as you would if you fought the actual player. This probably sounds weird to some people and they might wonder about balance and how the AI will represent the player’s character, but it is definitely a cool concept. 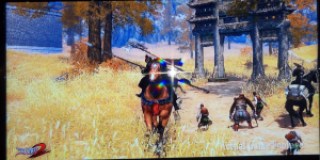 The combat looked like it was twitch-action based but I couldn’t say for sure. I’ve seen gameplay videos for many MMORPG’s that make them look like they’re hack-and-slash style when they’re not. I am convinced it doesn’t use a tab-target system though, from what I saw. There is some cool-looking mounted combat. There’s some kind of ranking system involved with that too. The higher level you are, the better mounted combat you encounter.

Rui could switch between different videos for the different aspects of gameplay. When I asked to see the melee combat again she didn’t understand what I meant, but she understood “hand-to-hand”. I love finding out these differences in our language barriers. She was so sweet and super enthusiastic about the game.

At some point, an older Asian gentleman came by the booth. One of the other ladies there came over and tried to pull Rui away to talk to the older gentleman. I didn’t understand what they were saying but Rui seemed to be insisting that her partner deal with the older gentleman. I felt so bad! There I was, basically a nobody posting on a personal blog and she wanted to tell me all about her game so I could share it with a bunch of Americans that couldn’t even play it! I wanted to tell her that it was okay but she was so persistent in telling me about their game, I just didn’t want to turn her down, ya know? It was weird, but also very cool.

My sister reminded me that they are looking for American publishers so any word on it might be good. I’d love to help them get some attention. Their games look really neat. I spent a couple of years playing almost nothing but “free-to-play” games; there is an endless supply of them. So, I understand how hard it would be for them to get their games moved over to the states. So I really wish them the best. 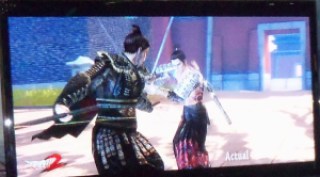 So, if you happen to have any gamer friends in China, Hong Kong, Japan, Korea, Taiwan, and Europe then please let them know about pixelgame.net, where they host free-to-play games. Other products by them are the Blade & Sword series, and one that I recognized but have not played: Zentia.