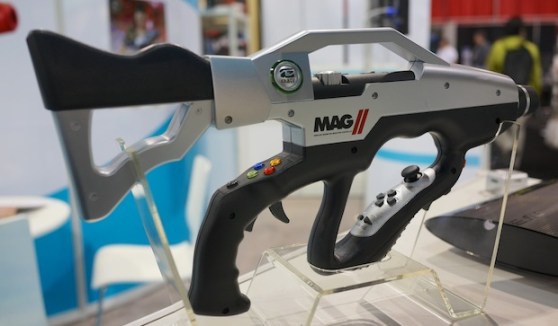 Introducing the Mag II Gun Controller, which works with 95 percent of all PlayStation 3, PC and Xbox 360 games. If I remember correctly, game-accessory brand G-Mate plans to work an update into the upcoming PlayStation 4 and Xbox One consoles as well. You can also remap the buttons. What? Yeah, I know! It’s a controller/gun hybrid. I seriously want one. It’s the most fun I’ve ever had using a zapper gun, and it gave me full control. Thanks to Angelo Golden (a sales rep) and Vincent NG (one of the developers) for explaining how it works to me at the Electronic Entertainment Expo (E3) this month. They’re really nice guys. The creator, Erik Wang, was also there, but he was in a meeting, so I didn’t get to talk to him.

The peripheral boasts update-friendly firmware, high precision, and built-in vibration. It doesn’t need a sensor bar, either. One of the coolest features that stood out to me was the on-the-fly calibration. That’s right — you can be in the game playing, notice your calibration is a little off, and just hold the button in the front of the gun for a couple of seconds and then release to recalibrate the controller.

You have full functionality built right in. I was told that a lot of people have a hard time getting used to it, but when I tried it, I loved it instantly. It was a little weird to get used to but totally easy to pick up and go. The weight of the gun is pretty light, and it’s super comfortable. It was easy to notice this because of how natural I felt holding it, and it’s not like I hold guns very often. The fact that it’s built for use with two hands made it perfect to me. Most of the time, when I use a one-handed zapper gun, I end up using both hands anyway due to the weight on my arm.

With my left hand near the front of the gun, I held my thumb over the joystick, which controls the character’s movements. My right hand was back — with my index finger over the trigger and my thumb over the control buttons like “jump,” “reload,” and so on. It felt so natural that I wanted to take one home.

The gun uses a new technology for this type of peripheral called gyroscope. It doesn’t use a laser. Someone can walk right in front of the screen and not interrupt the gameplay — except visually, of course. Angelo and Vincent demonstrated this for me. Vincent stood in front of the screen, and the game still reacted to Angelo shooting at it. I don’t think this feature is that big of a deal, but I still thought it was pretty cool. I don’t have people crossing in front of my television very often.

I do have a goofball story to tell about the device. When I tried it out, I was having so much fun just being able to control my character and shoot with the gun by itself that I didn’t realize until after I got home that I wasn’t even using it right. My gun was nowhere near the screen. I was basically flailing it around while firing. Of course, I started off by pointing the gun at the screen, but whenever I made a big turn, I was moving it away. I had to turn the gun very far past my body to turn in the game. I just didn’t realize it when playing because I was having so much fun. I imagine changing the sensitivity should fix that up. Now that I think back on it, I wonder if the last person using it just had the sensitivity down too low.

The Mag II is already available to buy online for $150 at multiple retail stores including GameStop. Check out the official website if you want even more details. It states that the controller only works for PS3 and PC right now, but the website needs updating. I saw it being used with Gears of War. Also, a customer review at GameStop mentions the firmware update for the Xbox 360.