I’ve been addicted to “cloud gaming” for a couple of years now. Ever since I turned on and used the OnLive service I’ve done everything I can to be able to share my experience of it with other gamers. I just love it so much. I found a fan forum for it, which was basically the only place that accepted the platform. Everywhere else was just a bunch of gamers telling me it couldn’t work. I knew better.

I’ve been using the service long enough to have talked to a few staff members from time to time, on the service, and rarely on other social media. Usually if I ever see a staff member online on the service I wish them a wonderful, fun day. I care about these people that contribute to giving me this awesome cloud gaming experience. Also, every time I’ve ever dealt with customer service they have been super friendly and eagerly helpful.

One staff member in particular, Nate Barsetti, also known as “OnLiveNate” is the one who usually handles OnLive’s social media via Facebook and Twitter. He also handles all aspects of Customer Relations including Account Management, Customer Service and Community Management! He is a super cool dude. I’ve always thought of him to be a nice, friendly person, and pretty dang funny too. I could see it in the responses he gives to users. I think it’s pretty amazing how he is able to consistently react professionally and kindly, when there are so many people being hateful.

Several months back OnLive did a neat event that offered up a rare profile avatar on their service if you participated in it. Currently, if you change your profile on the service, you need a staff member to re-upload your special avatar because it’s not available from the regular avatar selection. A week-and-a-half or so before E3 was going live, I casually sent Nate a message asking if I could get an avatar fix for my OnLive profile. He responded that it would be no problem. I’ve bugged him about it a few times. I’m still always surprised and happy when I get a response from a staff member, you know? 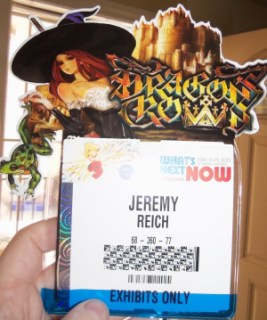 Did He Just Say That?

Then he asked me if I would like to get a pass to E3 for a day! Yeah, I don’t know how many times I re-read that message to make sure I wasn’t misunderstanding. It was clear as day but I still couldn’t believe it. I’m not gonna lie, I cried. I can’t remember ever crying happy tears in my life before. I’ve been on the verge of it, but never actually had it happen. This time the tears wouldn’t stop, and of course the laughter. And of course, the more details I got, the more we talked about it, I couldn’t stop crying. This went on for a few days. It was insane! I feel weird just talking about it, but I’ll never forget it.

I’ve been gaming for thirty years. This is my life. I love it. So, E3 was like one of those things I basically knew I’d never get to see in my life but would go nuts if I could. Imagine how you would feel, then multiply that by a billion, seriously! This was a dream come true.

Thinking about it all now still brings tears of joy to my eyes as I write this. After I had allowed myself to let it sink in, I was smiling every single day, all day long, up until the event, through the event, and even on my way home. This is definitely one of the most amazing things to happen to me in my life, other than getting to know, and speak with God. I know that’s saying a lot, but that’s how much this meant to me. Of course I was also praising and thanking God for it too. 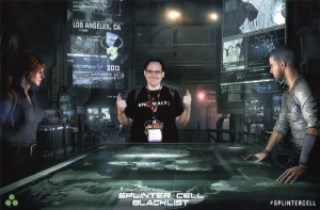 I’ll explain a little bit about the resistance I met with fans and non-fans alike, in order to share what led up to this. Since the second I tried the service, I went around everywhere I could to share my love for the OnLive platform. I was so excited about how the service worked. I visited and posted on many different gaming forums to discuss it. I don’t remember how exactly, but I found a fan site called OnLive Fans and joined up. That site is now gone, but a new one has taken its place. (Thank you admins.) Please use me as a referral if you register there!

OnLive has always been slow with its game releases. Long-time fans grew very bitter. I never blamed them for being mad about slow releases and lack of communication from the service. I do hold it against them for treating OnLive and its staff like they are enemies for it, though. I kept trying to point out, “Look, this is the only awesome service we can even do this on. On top of that, everybody else is trying to copy them!” But that was never good enough for them. I never denied the problems, I’ve just always seen the good outweigh the bad. Then, there are the people who insist it “won’t work” even though they admit they’ve never even tried it. Yeah, makes me laugh too.

It was pretty frustrating constantly arguing (over a period of two years) with non-fans and so-called fans that only wanted to focus on the negative things of the only true cloud gaming service available to us. A lot of people that can’t access OnLive where they live talk it down like it’s trash. I understand that they can’t use it, but that doesn’t mean the service sucks, it just sucks that they can’t use it right now.

I felt like an outcast for a very long time, because the most vocal people other than myself were people I considered “trolls”. It never changed how I saw the service though; it couldn’t. The video quality is perfect, coming from OnLive, and the quality only fluctuates depending on my internet connection. I still can’t get over it, it’s flipping amazing.

I was past the point where I felt like I couldn’t share my love for the service on different gaming forums anymore. Being tired of fighting off “trolls” and I guess “troll fans,” I had decided to write every single thing I loved about the service and share my feelings about it that way. So even though I couldn’t discuss my passion for it with fellow gamers who also loved it, I could at least tell people everything I loved about it and how it works. One hope I had was that it might clear some things up for people who haven’t used it.

There is a lot of confusion regarding the service. Every new article about it is always a little bit misinformed. Every article about the service would say there was a subscription requirement to use it, which currently isn’t true. Most articles about the service were based on any recent news; for example, a newly added game or feature. So they would try to throw in little tidbits of information that just weren’t correct. No big deal, but I did want to clear things up.

My article explains in detail exactly how the service works, and I’m pretty sure you can see my passion for the service in it. I definitely put all of my love into it. I couldn’t change it now if I wanted to. I have nothing to add. I wrote it after using the platform for two years so it’s pretty in-depth. My incredible sister formatted the article for me so that it would look good.

While going over some of the details of my trip to E3 I asked, “why me”? I knew I was always supportive and I do consider myself OnLive’s #1 fan but I wanted to know. Nate said that part of the reason I got invited to E3 was because I was “by far the most consistently positive voice in the community”. It was noticed! I was hoping that OnLive staff had seen my passion for the service because I expressed it daily for so long. I just never got any actual feedback from it, other than from other “fans” that repeatedly called me a “fanboy” for it. It was an incredible feeling to know that it was recognized. My article was what “sealed the deal”.

I had posted this article on a few different sites. I wanted to share it with as many people as I could. This is where the awesome comes in. My article made its way around OnLive’s office and their PR  department was impressed! It was also the first article I’d ever written about any of my gaming experiences. (Don’t tell OnLive’s PR department!)  I can’t even express how being told that my article impressed the PR department of my most favorite gaming service made me feel. On top of that, so much that I would get invited to E3? I have tears in my eyes again.

I was already beyond excited; I had already lost my mind just from being invited to E3. So… I was going over the details with Nate and I mentioned that I don’t drive, but I would catch a bus if I had to, and I sure would have. I would have walked, I kid you not. I explained to him that I could probably get a friend to get me there. He asked me what I thought of a Town Car picking me up.

At this point I start shouting out loud “what the f*** is going on”, “oh my gawd”, and so on, repeatedly. My sister wished she had gotten it on camera. It was the first time in my life that I ever squealed with glee. It was strange, and totally awesome. I was being treated like a king, I don’t know how else to describe it, that’s exactly how I felt and I was just going bonkers. I’m a poor guy, ya know? I don’t own a car because I can’t afford to. I buy games cheap and on sale. So there I was, a poor, passionate gamer going to E3 and in a Town Car? I went straight back to believing “this can’t be real, this isn’t happening”. It was impossible, and I still can’t help but think of it as a miracle.

Thank you so much for reading, I hope you were entertained and could get a feeling of the experience I had, because I really wanted to share that with you.

I will never have enough words to express my gratitude for being able to experience this. 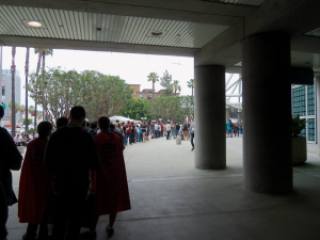