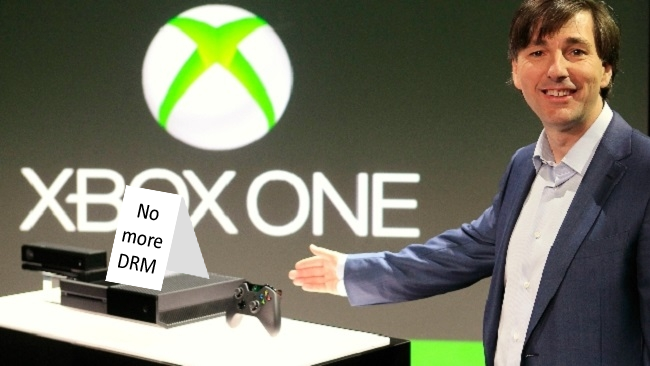 It’s probably fair to say Microsoft’s upcoming Xbox One game console hasn’t been having a great time for the past week … or two … or, in fact, at any point since its reveal. The unveiling in May had a disappointing focus on TV, sports, web browsing, and other things that weren’t actual games. Since then, there has been a constant stream of bad news: We were no longer going to be able to trade or sell our physical discs, we had to access the Internet once every 24 hours or be locked out of our games (living in a rural area myself I can tell you this would not be fun — but why on earth would I want to live in a rural area?), and let’s not forget that the all-seeing eye of Kinect would be watching us every hour of the day, plotting, planning, and waiting … .

But wasn’t there any positive news? Well, there was the ability to play your games from any Xbox One anywhere as long as you were signed into your account as well as the much touted “family sharing” feature that meant that up to 10 people could share a single games library between one another. This was to counter the fact that we could no longer trade games with each other and was something that many people were excited about.

For most people, though, these weren’t enough, and they felt they’d rather not buy an Xbox One with the digital-rights management (DRM) policies that were in place. Pre-order numbers also reflected this, and Microsoft knew it had to do something to get the Xbox One back into the competition. Thus, it cancelled the 24-hour check-in and allowed us to do what we want with our discs again. The gaming community rejoiced. We’d beaten the big corporation into giving us what we wanted. David was victorious and Goliath lay dazed as the second-hand video game retailers rejoiced.

There were some, however, who were not happy with this new development. When Microsoft got rid of the DRM, it also got rid of the family sharing feature, leaving the Xbox One a boneless, floppy corpse like something out of Theme Hospital. It’s understandable why these features couldn’t be supported any more; by having the freedom to do what we want with our discs, we sacrificed the features that depended on us NOT being able to do what we liked with out discs.

But what about downloaded titles? Surely they could still be shared in the way Microsoft envisioned?

Well yes, they could, but they won’t. Despite Microsoft believing in “the benefits of a connected, digital future,” they went all or nothing on this. There’s no reason I can see that digital downloads couldn’t be treated in the same way as they would have been before, leaving those who want to download their games and share them with their friends online free to do so. The entire saga stinks of a company clutching at straws and pulling ideas out of its ass. First Microsoft gave us a poor deal, then it ran around like a headless chicken trying to add things to sweeten the deal (why else would they not mention the “family sharing” feature at the console reveal?), and now it’s back at step zero, making its policies essentially the same as those for the Xbox 360.

Despite all of this, there is hope for the system yet. Now that Microsoft has removed the DRM,  it has a clean slate that it can build on how it wishes. Family sharing was a great idea and one of the few things the Xbox One had over the PlayStation 4, so it would be foolish to discard the feature so quickly. There’s no reason the Xbox One can’t be the gaming revolution that Microsoft wanted it to be. Microsoft is just going to have to try something slightly different than what it had in mind.