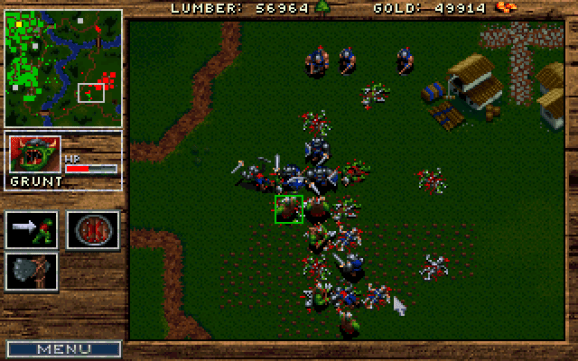 I remember a particular math class, sometime in middle school. My uncle had just introduced me to this cool new game called Warcraft: Orcs and Humans, and I quickly became obsessed with it. I was stuck on mission 3 of the orc campaign, having lost several times in a row.  My production of orcs just wasn’t fast enough to keep up with the attacks from the humans. My recent losses burned the image of the mission 3 map into my mind, so I started doodling the map in my math notebook.

Before I knew it, I was as engrossed as if I was playing the game. I sketched out the forest and gold mines and plotted the strategic placement of lumber mills and town centers to maximize harvest of those resources. I estimated how many workers I’d need to train before my production rate was high enough to switch to warriors. I found the key bottlenecks on the map and planned out where and when I would build defensive formations to protect what would be my second and third gold mines — vital resources needed to increase my production high enough to overwhelm the human camp.

And then the bell rang. I looked at my notes, realizing I knew exactly how to beat mission 3 of Warcraft, but I had no idea of what the teacher discussed in math class that day. I felt incredibly guilty about this, like I had slacked off or cheated in some way.

I am a gamer. I’ve been a gamer since my parents bought me a Nintendo when I was five.

I am also a student. Since I rounded off my college degree with a PhD, I’ve been a student for 22 years — almost as long as I’ve been a gamer.

I am also a learner, which strangely enough is not the same thing as being a student. Both playing games and attending school contributed to my learning but in very different ways that were sometimes at odds with each other.

This has to change. At this point, we now know for a fact that good games have something to teach us about good learning. They are structured in ways that engage students towards an intuitive understanding of complex topics. Player-created strategy guides or game websites like WOWwiki are testament to that fact. Games capitalize on intrinsic reward structures, the same structures that make learning itself engaging. We can group these concepts under the term gameful learning to characterize them as learning principles that are common in but not unique to games.

All good games are gameful learning tools, whether or not they have an educational label on them. More importantly, this means all gamers are learners. The question we need to be asking ourselves is not if players are learning from games but what are they learning. And we need to take that question well beyond content knowledge to conceptual knowledge and 21st century skills like problem solving and systems thinking.

Of course, these are all abstract ideas. It’s nice to theorize about what needs to happen in schools; it’s another thing to design a solution to the problem. I designed the recently released The Fluid Ether, a physics simulation game that embodies gameful learning and is targeted toward schools. I don’t think this game is the answer but rather an answer to the problem. We need plenty more answers.

For me, designing this game was personal. It’s the game I wished school had used for learning when I was a student. It’s the tool that would have let me learn as a gamer, guilt-free. I’m not designing a game for the next generation of students. I’m designing for the student experience I missed out on.

So, here’s the plan: Let’s design gameful learning tools, use them to restructure school, and make the terms gamer, student, and learner indistinguishable. Let’s save the next generation of gamers from guilty learning. Who’s in?

Kevin Miklasz has a background in science and informal education. He is the director of digital learning for Iridescent and the educational designer of The Fluid Ether.