Recently, I’ve been playing a decent amount of Papers, Please (around three hours, according to Steam). If you haven’t heard of it, it’s a game where you sit at a border checkpoint and check entrants’ documents for a variety of things to decide whether or not they are allowed into your country. As the game progresses, the rules change to match recent events and new protocols get added on a regular basis. It eventually becomes a crazy mental checklist of a variety of different variables including appearance, expiration dates, and tons of other things you must process in order to verify whether or not someone is allowed through. It’s a great deal of fun for emulating such a menial task, and I highly recommend it.

At several points, the game is obviously trying to impart some sort of message or moral quandary. Do you refuse a woman’s entry because her papers are wrong even though her husband just went through ahead of her? Is a direly needed bribe, one that could buy food for your own family, enough to get you to break the rules just once? Possibly the most depressing moment, however, is when you get access to an X-ray scanner. This scanner takes full-body pictures of the entrant and shows you their completely nude form in shockingly clear detail. The primary intended purpose is to check for contraband or weapons, usually taped somewhere to the body, but there is one other reason for it as well.

Sometimes, the gender on the entrant’s passport and the gender of their character model don’t seem to match up. You are supposed to prod the person on this and scan him or her to check their gender for correctness. At first, I just saw this procedure as an attempt to catch those entrants who were using some sort of fake passport and posing as another gender. I thought their unwillingness to answer the question “Are you a man or a woman?” was due to fear of being caught and possibly detained. It was just another bullet point to check on my list of things to do. 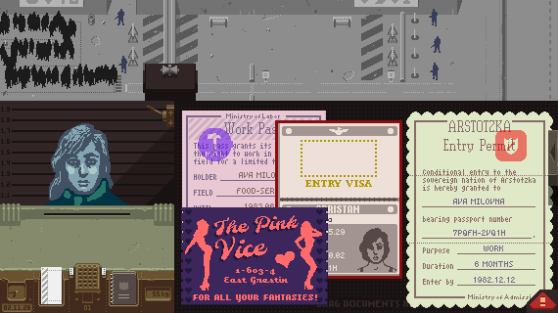 However, I soon started wondering if this was the case. What if the creator, Lucas Pope, instead wanted these particular entrants to be seen as transgendered people trying to outwardly project the gender they want to be? What if the the wrong gender on the person’s passport was just the rigid rules of society forcing his or her true gender to be displayed on the passport, even though he or she ached to be seen as otherwise? When this thought occurred to me, I started to feel very disgusted with myself every time I was forced to scan a person to confirm their gender; it was as if I was outing his or her’s closest-guarded secret, something one should never do to a person EVER. That question “Are you a man or a woman?” took on another meaning. I was asking that person something he or she most likely heard on a regular basis: a depressing question that reminded him or her that gender is seen as binary by society. It was almost enough to get me to stop playing entirely, for fear of outing yet another person.

I wasn’t expecting these feelings when I started playing Papers, Please. The X-ray scanner and stark, nude photos were something I had seen before in earlier coverage of the game, and they had elicited different feelings of disgust; I  knew that I was seeing someone naked without their permission, something that the other person didn’t even seem to realize I could see (that’s the way the game makes it seem, at least). The idea of outing trans people is even worse than that to me with the knowledge I’m seeing such a conflicted, personal part of their lives.  My interpretation of these particular entrants may be incorrect, as it’s possible that Pope never intended them to be seen as trans, but I stand by it. I also feel it gives the game even more impact emotionally. It may be horrible to allow a person through whom a woman begs you to deny out of fear for her life, but I still think that outing a trans person’s biggest secret will weigh most heavily on my mind from my time with the game.