If you’re an avid player of video games and you’ve spent a fair amount of time on the Internet, chances are you’ve come across the term “fanboy” on more than one occasion. It’s often used as an insult, with the gaming community looking down on those to which it applies the label. There is a problem with this mentality.

First off, what exactly is a fanboy to begin with? Some may or may not have noticed how loosely the term is thrown about on forums and comment sections all over the web. It might even seem like the original, intended meaning has been forgotten as many people make the accusation during heated arguments with little justification. The Urban Dictionary provides a very straightforward definition, but allow me to attempt to describe it in my own words.

Personally, I would define a fanboy as:

An excessively loyal fan of a product and/or its company who blindly supports the every action of said product/company without question or reasoning.

Does that sound condescending in any way? Truth is, yes … it is very condescending. Herein lies the problem. “Fanboy,” as an insult, is often an unfair and out-of-context accusation. More often than not, it is used in arguments between two or more people as a way to disregard a person’s point of view. To many, casting someone off as a fanboy is far easier than attempting to understand an opposing viewpoint. 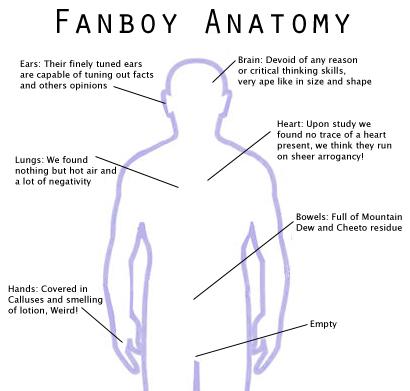 Maybe not entirely true, but an accurate representation of the way the gaming community views fanboys.

Granted, true fanboys do exist, but they are not nearly as prevalent as the gaming community would like to think. While certain people may at times appear to be blindly following a company, product, or figure in the industry, chances are they may not be expressing themselves and their points as accurately as they could be. Seeing as though these arguments take place over the Internet, there is an undeniable chance of miscommunication. You may not understand where a certain person is coming from as well as you think you do. Everyone is guilty of this at some point. I will openly admit that I’ve done this on numerous occasions.

On another note: Let’s be honest here. To a certain extent, there is a hint of fanboyism in everyone. Fans’ loyalty to their favorite games, companies, and industry figures compel them to show their support. And really, there’s nothing wrong with that. Most of us are capable of discerning between a good decision on part of our fandom and a bad one.

In this video, GamSspot helps viewers assesses whether or not their state of mind falls in line with fanboyism.

Understandably, I realize that no one can simply grab the Internet by the shoulders and ask it to stop crying “fanboy!” every time someone shows their enthusiasm for something. But that’s not what this article is about. The point I’m trying to make by writing this is that a person’s point of view may not be clear over the Internet and that during a discussion, the gaming community should make an attempt to understand where the other side is coming from rather than jumping to conclusions and hurling accusations. I’m not saying we all have to agree with each other on every subject. However, we should at least put forth an effort to acknowledge the thoughts and feelings of others.

Admittedly, every once and awhile, it may turn out that you really are facing a fanboy, someone who actually is bowing down to the every action of their idol or praising every facet of their favorite game. At that point, it would be clear that the conversation is going nowhere, but by trying to see things from their point of view, you could later shrug and say, “Hey, at least I tried.”