After $800 million dollars of first-day sales, Grand Theft Auto V is living up to everyone’s expectations. The fans love it, the critics love it, and the mainstream loves using it against us. Everything’s coming up GTA, and none of us are shocked. I’ve put in a couple of hours, and so far every bit of praise is well deserved. However, I find myself with a recurring conundrum, one that makes me question if I’m a real gamer or not:

Is this game too big?

Teenage me would be screaming right now. “What do you mean too big?! It’s a virtual urban playground with seemingly limitless possibilities! The world of Los Santos is your digital oyster! What’s wrong with you?!” Yet I find myself struggling with the sheer immensity of it all — not because it isn’t any fun, but because I don’t know where the heck to start.

The narrative buff in me wants to focus on story missions, while the mischievous little kid wants to get into a car and start causing some mayhem. Both of those thoughts hit me even before I consider the insane amount of events I can choose from should I not go with the main story. Eventually, my inability to decide paralyzes my mind, and I end up wandering around Los Santos getting nothing done.

It’s a phenomenon cut from the same cloth as the dreaded procrastination bug that bites countless Internet users around the world. How often have you sat down to do homework, write here on GamesBeat, etc., only to find yourself sucked into a 45-minute YouTube black hole before anything productive happens? How many Facebook updates or Tweets have spawned from the inability to focus? Fixing the problem would only take some concentration on the task at hand, yet we all continue to watch cat videos instead of getting work done.

If you’re like me and the massive amount of content is hard for your non-focused mind to traverse, fear not. Some critics have mentioned GTA V’s uncanny ability to derail productivity in their reviews. GamesRadar’s Hollander Cooper wrote:

“At times the staggering amount of content can be overwhelming; there’s so much to do that it’s easy to be paralyzed with indecision. [There’s that phrase again!] Whether you’re exploring the upper-class suburbs of Rockford Hills as Michael, the beautiful and scenic Vespucci Beach as Franklin, or the hillbilly-filled Blaine County as Trevor, you’ll struggle to drive three blocks without finding something interesting to do — be it preventing a robbery or helping a paparazzo take salacious pictures of a teen star.” 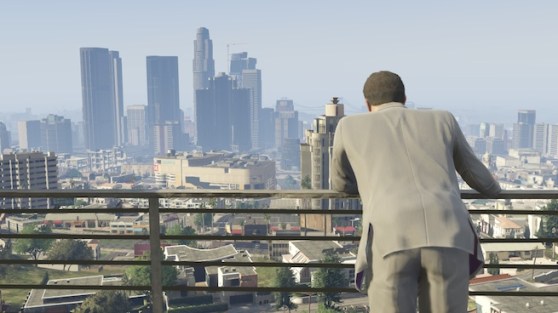 It’s a real shame, as Rockstar’s ambition should be fully realized, but in stuffing their game with an almost infinite amount of things to do, they’ve made it difficult to focus on just one task. I don’t want to strictly blame Rockstar here though, as this seems to be the case with most open-world games I play. There’s a reason The Elder Scrolls V: Skyrim sits unfinished on my shelf; I spent so much time on side tasks that I never finished the main quest. Again, nothing against the guys and gals at Bethesda, they made a terrific game that deserved every accolade it received, but I’m not sure I’ll ever go back and slay the dragon.

As the next generation approaches and games get bigger and bigger, this is an issue that I don’t see going away. Some are perfectly fine with it, as it means that games will continue to deliver limitless gameplay fun for as long as they choose to play. Others, like me, know that the larger a game gets, the less chance it’ll be finished if played for leisure. I fully expect to have this conversation about Watch Dogs and Dead Rising 3 come November, and I know I won’t be alone.

I will play Grand Theft Auto V to completion … once I’m doing figuring out what car I want to drive to the next mission … or what I can do on the way there.