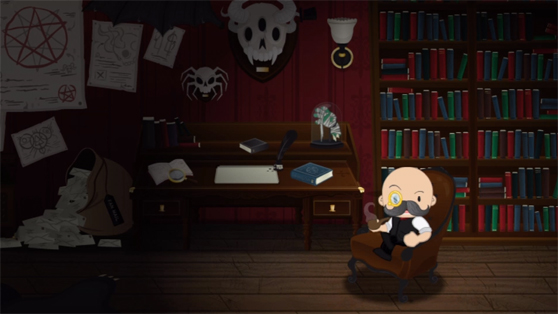 Not long into the first act, Mediatonic’s side-scrolling brawler will almost assuredly endear itself to you. A stylized, button-mashing romp through the inner-circles of the supernatural, it’s loaded with old-timey charm and creative wit. The cartoonish aesthetic, barbed dialogue and tongue-in-cheek creativity remain on-point from one vexatious engagement to the next.

As Baron Dashforth and his trusted apprentice Mr. Scampwick reenact their adventures on stage, it’s hard not to drum up comparisons to what’s arguably the high-water mark of the digital brawler, the now five-year-old Castle Crashers. Yet, like many beat-em-ups, Foul Play suffers from repetition spurred by a lack of mechanical variation. The wash-rinse-repeat structure and relatively brisk run time leave little want to return to what’s otherwise a fantastic presentation.

All the world’s a stage

Unfolding over a single evening of theatre, Foul Play takes place as a staged performance recounted by noted daemonologist Baron Sebastian Dashforth. A gentleman not known for excessive exaggeration or fabrication, Dashforth frames each act of the “perilous and entirely accurate adventure” before slipping into his demon-hunting role to battle all manner of ne’er-do-wells. This vaudevillian theme is Foul Play’s selling point, and it works remarkably well thanks to clever and numerous little details scattered throughout.

Revolving backdrops and set pieces swing and slide into place, recreating the sands of Cairo, the streets of London or the underwater city of Atlantis with each new chapter. The stage itself is as much a character as Dashforth or Scampwick; there’s always some aspect of the production unintentionally peeking out from behind the curtain. Occasionally a stagehand will be caught resting on scenery as it slides into frame, or a demon-possessed villager will drop a line. These little touches really sell the experience and punctuate the button-mashing with well-earned chuckles along the way. 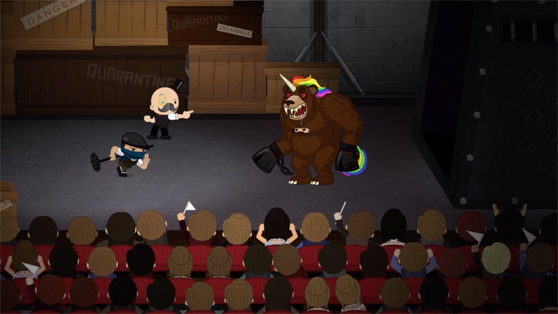 Above: “All the physical strength of a bear, matched with the legendary rage of a unicorn.”

Are you not entertained?

Eschewing the standard hearts, or orbs, or whatever passes for health meters in Victorian England, Foul Play ties multiple traditional systems together for a unique user interface that admittedly takes some getting used to. As you string combos together, the audience’s Mood-O-Meter gradually builds, awarding score multipliers the higher it climbs and causing ladies to stand and cheer while men toss their hats in elation.

Rather than fret over the well-being of Dashforth, every hit from an unseemly fellow dings the meter and causes the needle to drop. Furthermore, anytime you’re not in the throes of a combo your meter slowly begins to tick away, urging you to maintain a rapid pace in dispensing the what for to blaggards and black-hearted hooligans.

I’ll admit it sounds clunky, but it’s a system that deftly ties together presentation and gameplay while cultivating the old-time aesthetic. The raucous cheers that erupt as your combo climbs into the high-double and triple digits add a silly sense of accomplishment to keeping that streak alive.

For all its charm and clever delivery, the crux of Foul Play is the button-hammering gameplay through and through. Dashforth employs a sturdy cane to deliver weak and strong attacks, coupled with an easy-to-spot parry system that allows you to rebuff an enemy when he’s signaling his intent. It’s simple, straightforward and, aside from a handful of special maneuvers that become available over time, offers little in the way of variety.

While it’s possible to mix up the pace of combat with throws and slams, halfway through the adventure I rarely found a reason to perform moves outside the ostensibly most effective combination of parry, punish, throw ad infinitum. The good baron explains the reasons he doesn’t utilize more conventional weapons or firearms, but the omission of ranged skills, and scant character customization leaves something to be desired a few hours into the experience. 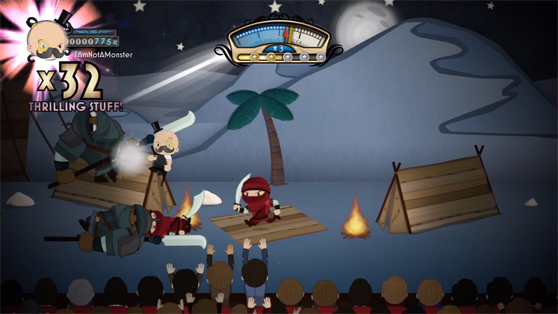 Though Foul Play offers cooperative play in both the local and online varieties, it falls victim to the dilemma most independent, multiplayer-enabled titles face. Namely, the community to support the feature hasn’t yet been established. At the time of this writing I’ve yet to encounter another would-be demon-hunter online, despite numerous attempts to join, or host matches, and in spite of a leaderboard that lists hundreds of potential comrades. If you can scrounge up a friend to play through the adventure in same-screen co-op, that’s your best chance for a multiplayer experience.

It’s a shame since so much of the narrative involves back-and-forth dialogue between Dashforth and his apprentice Scampwick, who simply vanishes once the action starts only to reappear at the next cutscene. The gameplay itself supports team takedowns and linkable attacks, but unless you’ve secured your own apprentice to take up a secondary controller, you’ll find no use for them.

The relatively brisk adventure of Baron Dashforth isn’t in itself a negative. The 4-6 hours of story really serves the clever writing and cheeky presentation before the gimmick becomes old hat, however the adventure’s abrupt ending and lack of reasons to return cause Foul Play to wander into one-and-done territory.

You’ll likely replay previous acts that weren’t totally satisfactory, using new moves to inflate scores and clean up challenges contained therein – if only for the achievements. But without a community or things to do outside of chasing scores, once the story is over, Foul Play’s only offering is an easier second helping. 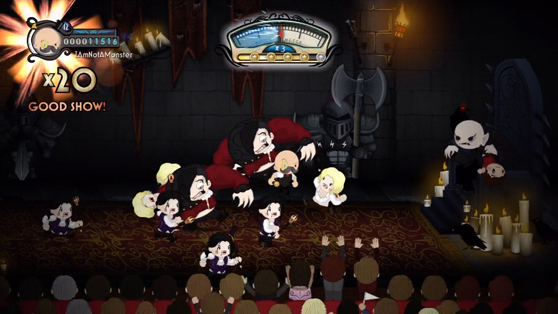 Above: A chap in a spot of bother.

Foul Play excels on the merits of its polish and irreverent wit. Mechanically, it’s a suitable brawler that strings together enough enthusiasm to service the charismatic presentation, faltering through a lack of lasting appeal. The complimentary comparisons it draws to genre benchmarks are double-edged; simultaneously speaking to the quality of the game, while reminding that it’s just not quite there. Come for the wonderful personality and well-crafted ethos, and enjoy the button-mashing for as long as you can.

Foul Play was released on Sept. 18 on Xbox Live Arcade and Steam. An XBLA retail code was purchased for the purpose of this review.