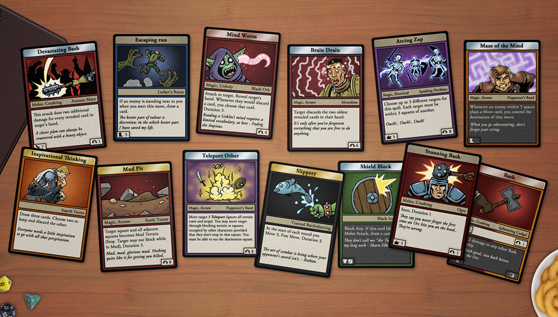 Since we’re on the topic of rewards, if you’re looking to play Card Hunter for at least a month and have $10 lying around, there’s no reason not to join the Card Hunter Club. Aside from supporting the developer, Blue Manchu, for a terrific free-to-play game, you’ll walk away with some serious rewards.

For every chest opened, Card Hunter Club members get an extra item that’s equal in quality to your best guaranteed item. So say you hit that twentieth win and have a sweet, sweet epic coming your way. Well if you’re a member of the club, you’ve now got two! Over time, and many chests bulging with just rewards, that’s a ton of free gear that not only gives you more options, but can be sold for gold for more gear. It’s like a gear pinata and a Club Membership turns your broom handle into a Louisville Slugger.

If you’ve spent most of your time adventuring with Gary, you might have run across certain adventure modules that contain victory squares – yellow tiles that award match points if you occupy more than your opponent. Most multiplayer maps host four victory squares, while some only one, but they’re always a point of contention and incredibly important to control if you want to win games.

On the other hand, getting to them is often half the battle, literally. In the few rounds it takes to maneuver your trio of heroes into place to set up a defensible perimeter, you could be beaten to the punch or whittled into nothing from long-range villainy. It’s important to load up on movement for this exact reason – he, or she, who controls map positioning controls the match.

While it may seem like a good idea to stack your party with stalwart dwarves that can take a beating, remember they’re only guaranteed two movement tiles every turn. Humans are less hardy but get three tiles per turn and elves, fragile by comparison, can dash about with four tiles per turn. Make sure you’ve got plenty of movement options for when you need to close the distance, seal up a chokepoint or hop off some magically conjured lava in a hurry.

As you progress, consider ditching your dwarves in favor of the fleeter races. Their low mobility against seasoned players with push, slide, slow and teleport cards means you’re going to spend the majority of the fight just trying to get back into range. The added hit points just aren’t worth losing a character to relatively cheap immobilization or distancing cards.

Since the majority of a match will be spent dashing around, trying to set up attacks and owning portions of the map, it’s important that when the opportunity arises, you capitalize with forceful gestures. After many, many matches where I’ve tried to ensure a good balance of attack, utility and movement cards, I’ve come to realize that the perfect card rarely comes up at the right moment.

Don’t build your deck around the all-powerful showstopper. Sure, it can annihilate everything inside the immediate blast radius, but odds are that while you’re sitting there, burning cards and waiting for the perfect moment, momentum has already shifted and you’re struggling to catch up. Instead focus on useful cards that – maybe aren’t the fantasy equivalent of an A-bomb – but will serve you in a variety of situations.

7. Focus on the flank

Since we’re talking substance, know that the higher level the gear, the better its power vs. cost becomes. Your starter pack helm, boots, armor and shield might carry some rusty mail and a few flimsy block cards, but as you – and your enemies – upgrade it becomes harder to deliver that perfect attack through a half-dozen layers of handcrafted metal. Armor starts to mitigate more damage for lower die rolls and blocks will totally negate those game-changing attacks with ease.

For this reason you’re going to want to focus on back-beating tactics to drop a foe quickly. The best way to go about it is to position two attackers on opposing sides of your victim. Trading off attacks between the two will find your opponent flipping around to react to the strike, at which point you stick ‘em from the other end.

As blocking cards almost universally won’t function when attacked from behind, and some armor doesn’t protect the flank, catching an over-extended character in crossfire is a great way to score yourself a kill and an early lead. Just be careful you’re not the one caught out of position trying to get behind an enemy. You might find yourself in the midst of a team that’s more than willing to show you how it’s done.