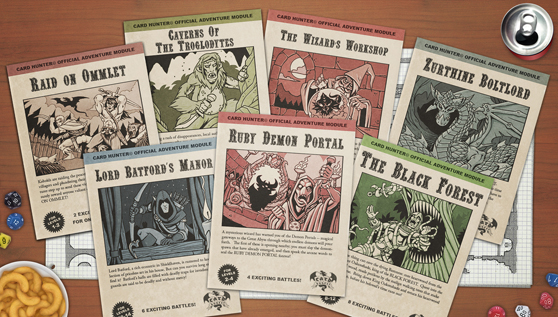 As you might have noticed by now, positioning is key in Card Hunter’s online battlegrounds. It’s good to be in a favorable position, but even better to make sure your opponent isn’t. Area denial cards that block off huge swaths of the map or coat the ground in spikes, acid, and lava are exceedingly useful when fighting over vital tiles or in narrow, cramped spaces.

Be sure you’ve got at least some variation of walls and environmental damage cards in your mages’ decks. Not only can you potentially keep enemies out of reach of the victory tiles, but you’ll be able to force them off in the event they’re firmly planted, or risk losing valuable health every turn. While there are spells that cleanse the land or allow one to hover harmlessly over top, I’ve rarely encountered a team that can remain unfazed by pools of fiery death between them and an objective.

This one might ruffle some feathers, but I firmly believe that surrendering a fight should be an absolute last resort. Anecdotally, I’ve run across many matches where I was absolutely certain I was going to be annihilated on the next turn, only to pull the right cards and squeak by with an ugly victory. Sure, it might be easy to roll over and resign for the green pastures of the next match, but there’s always that small element of luck in Card Hunter, and a battle can turn around as quickly as you can draw new cards.

Of course, there is etiquette to consider. If you’re down to one badly beaten half-dead hero, running for your life from a full party of pursuers, just do yourself and your opponent a favor and wish him a ‘Good Game’. You’re not helping anyone by dragging a match out three or four more turns than needed. But in the same token, don’t assume it’s over if you’re still in the position to win, however unlikely. Lady luck is a fickle friend and you never know when her allegiance might flip.

10. Commune with the community

Though it’s still relatively small – maybe because of that fact – the Card Hunter community is remarkably nice and helpful. I’ve yet to encounter a single bad apple, and while I’m sure they’re in there, the overall nature of the community is both kindhearted and respectful. Regularly you’ll get in-game messages from an opponent: wishing you luck, cursing their draw or just saying hello. When’s the last time you got a message on Xbox Live asking you how you were doing?

What’s more, the community is an amazing resource since many of its players have been involved in Card Hunter since the beta. They’ll regularly debate strategy, tactics and the current meta in global chat. They also answer questions almost always genuinely and only occasionally with a hint of condescension – but hey, one step at a time.

For those that want to delve a little deeper into the benefits of the community, you can freely spectate any of the on-going matches in the lower-right window. It’s a fantastic drop-in/drop-out resource, allowing the chance to study a team composition you like or see how a high-level player conducts their business. At the end of the day, the Card Hunter community is there to engage one another both on and off the field, and hopefully it stays that way.