Let me start by saying I love NimbleBit games and the studio as a whole. I, like many of you, was hooked when I discovered Tiny Tower. I love the pixel art, the bitizen characters and the little attentions to detail in their games like the Bitbook (mock in-game Facebook). Not only are their games good but it seems like they are the underdogs that everyone is rooting for, and I mean “underdog” in the best way possible as in they don’t have the capital or resources that their competition has. It’s hard not to respect them when they send notes like this to studios who copy their games.

Then there was Pocket Planes. I enjoyed Pocket Planes but not for very long. I played for less than a month and didn’t monetize. I felt the game fell short in a few different aspects. Some complained the gameplay is a little repetitive but that can be said for most games. What’s not repetitive about Candy Crush or Clash of Clans? However, the lack of missions or progression got to me. I also ended up discovering a killer strategy. Invest in the larger planes (level 3) and close all airports except your major (level 3) airports. The strategy wasn’t dependent on how many airports/routes you had, but relied on sending better planes on longer routes. This seemed more like an exploit rather than a compelling strategy.

When Pocket Trains came out several people around me were initially underwhelmed saying things like “this is just another Pocket Planes.” I had to remind them that many games are clones of another, or get inspiration from another game. This isn’t a bad thing so long as they improve on the former or inspirational game. After playing Pocket Trains for a while now I think there are 5 critical things that NimbleBit improved to make the game more compelling and I’m sure some of these could be applied to other games out there.

NimbleBit improved on this in several ways so we’ll tackle them one at a time. 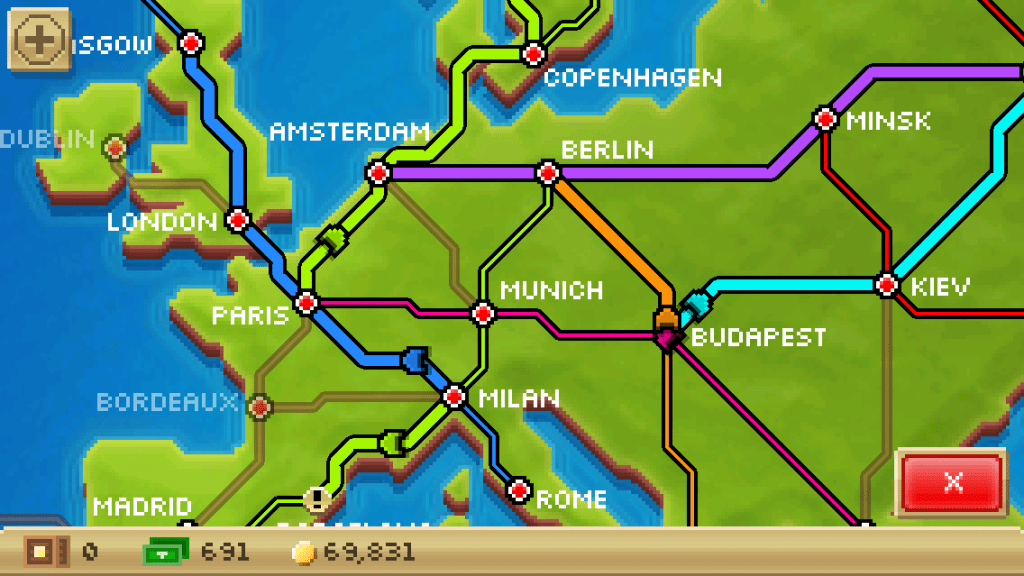 Above: Building a network and using the right trains for proper routes is crucial.

In Pocket Planes players can purchase plane parts in order to “build” new planes at a discount, but there’s also the option to just buy the plane already built. Having the option to buy the planes instantly devalued them to me. There’s no scarcity or nothing special about those planes if you don’t need to work for them. 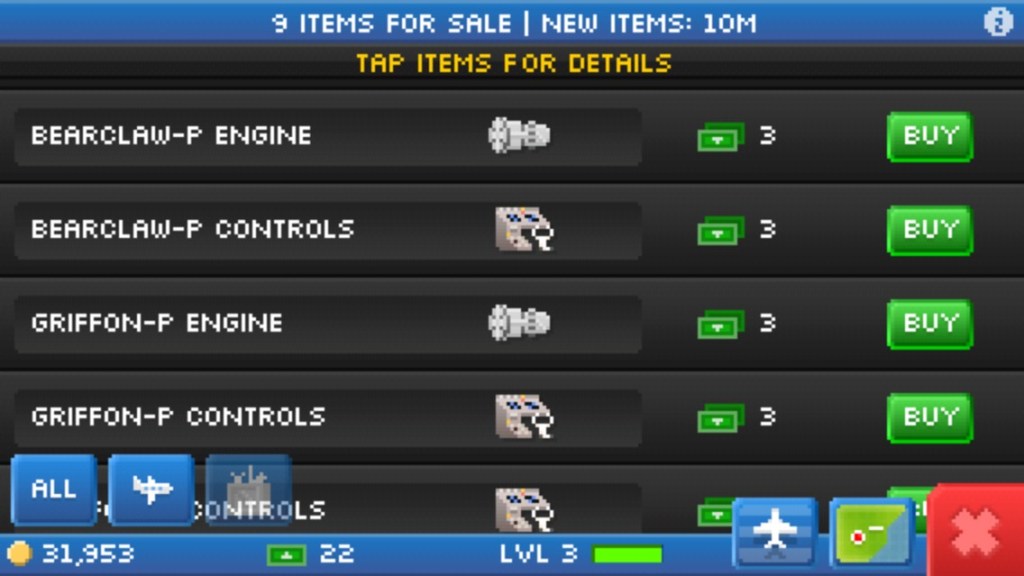 Above: You can buy plane parts… 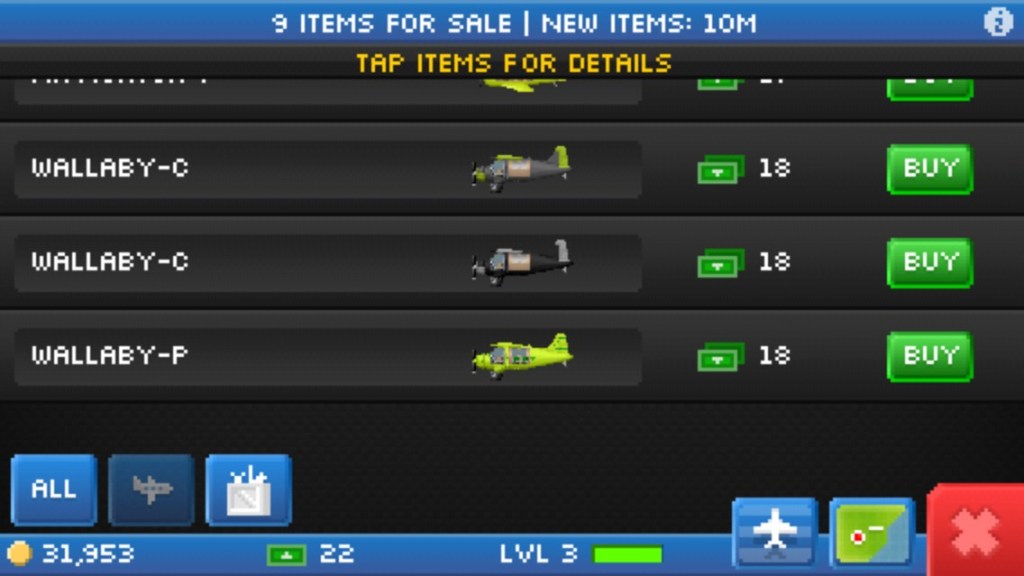 Above: …Or skip it and just purchase planes.

I believe NimbleBit realized this and that’s why you can’t purchase pre-built trains in Pocket Trains. Players need to collect crates and use “bux” (premium currency) to open them. This makes even paying players work for special train types and it also helps drain player’s premium currency, but NimbleBit is also generous with the premium currency so they’re not being greedy about it. 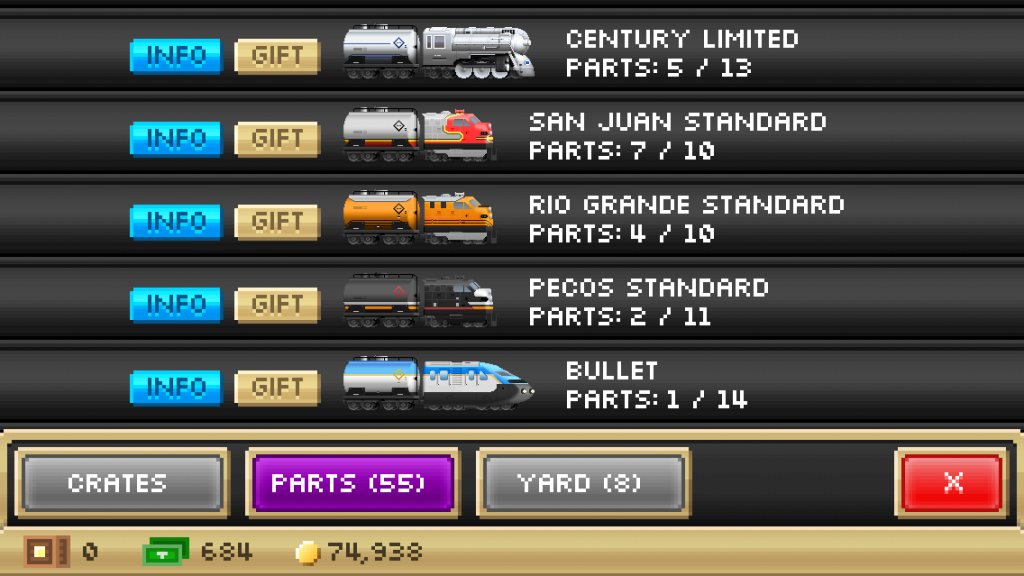 Above: I need more special crates to finish these trains! Perhaps I should buy some.

Like in previous NimbleBit games there are coins and bux for the standard and premium currencies. However, NimbleBit also added “crates” and “special crate” IAP options. Players come by regular crates pretty often, but special crates are rare and require a large amount of coins to purchase. This is a great accompanying IAP option to bux because bux are required in order to open crates. If I spend $5 on 50 special crates then I’ll likely also need some bux to help open that many crates. Adding complementary IAP options like this will greatly increase your odds to persuade players into repeat purchasers. 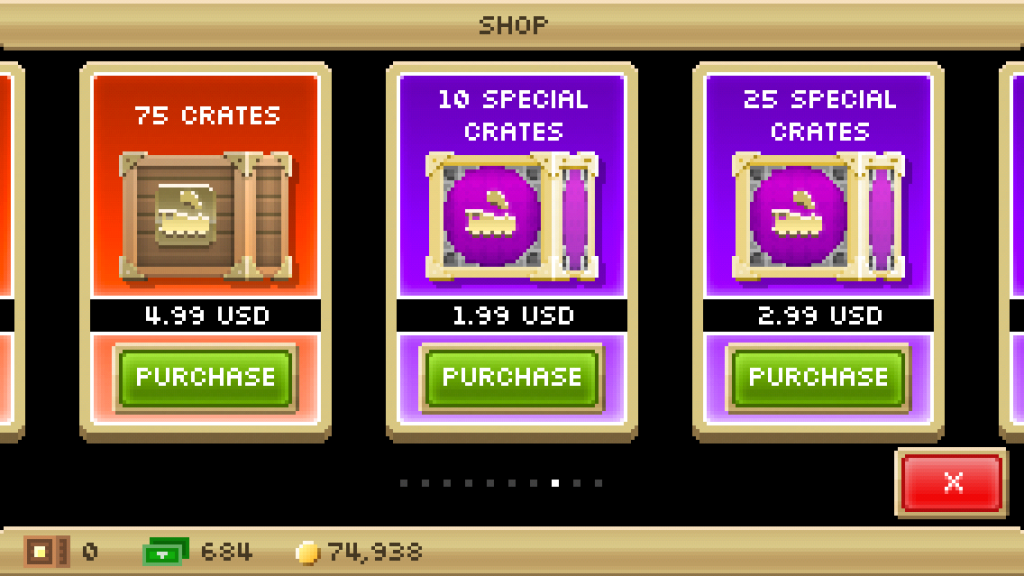 Above: I bought some special crates… 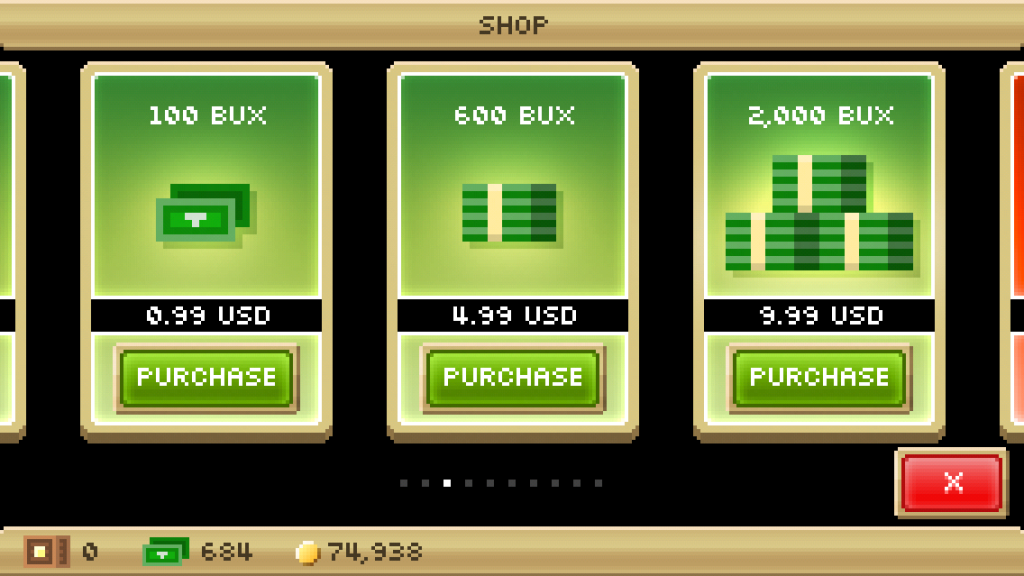 Above: …And needed some bux to open all those crates.

In Pocket Planes when a plane lands from a flight it’s immediately ready for the next flight. I also played Pocket Planes religiously for two weeks strait, uninstalled, and then never played again. It’s not a necessity to have delay in all F2P games, but I really encourage it for games that can be repetitive or shallow to break up sessions lengths to keep player’s interest for longer periods of time.

In Pocket Trains, the trains have a certain amount of fuel that they can hold. After traveling, fuel regenerates at a rate of 1 fuel unit every 10 seconds. Players typically wait less than 20 minutes to refuel, but this break helps them get away from repetitive tasks, or helps persuade them to monetize if they’re in a pinch. 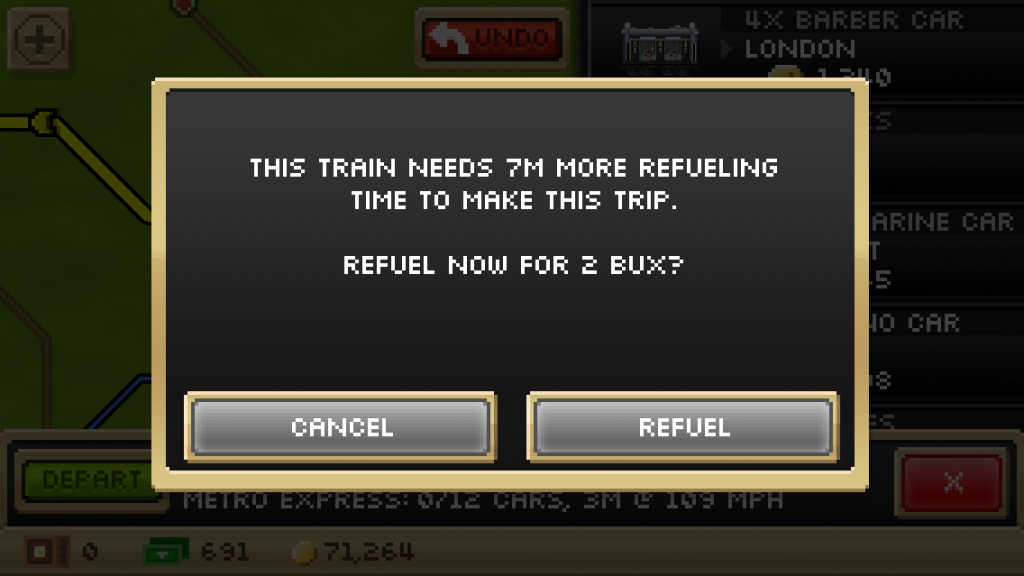 In Pocket Planes players could join a team (or flight crew) and participate in events that lasted a few days with other players. The concept sounds great on paper, but there were a few flaws.

I liked the concept of a team event because it was turning a single player game into a multiplayer game, but I don’t think it worked out as well as one might have hoped during the designing process. 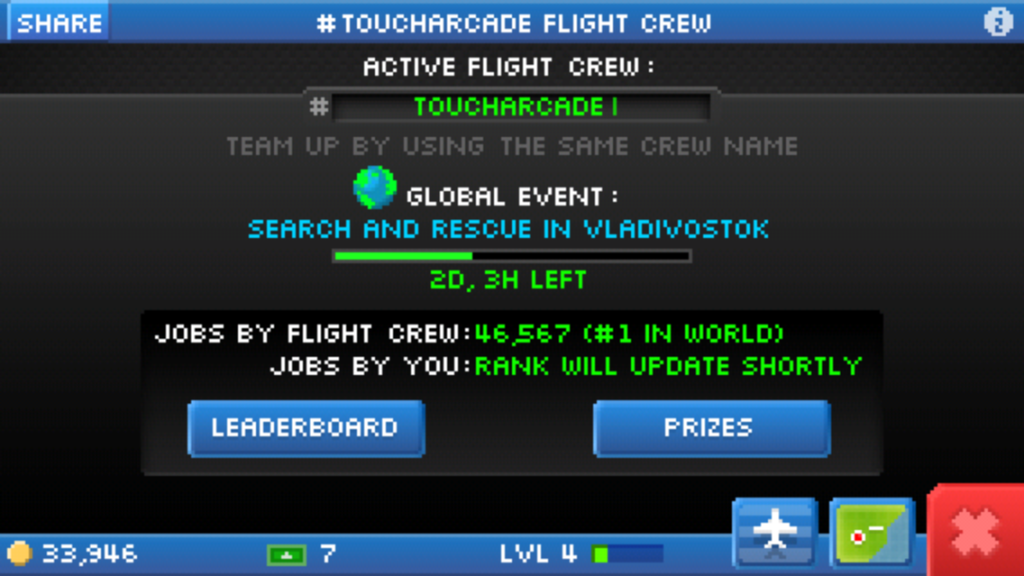 NimbleBit fixed these event issues in Pocket Trains. They have daily events to encourage players to come back every day to participate and the events are completed on an individual basis versus a team event. This also complements the delay with refueling because players might spend bux to refuel their train or fast travel to a location in order to finish an event if they’re close. 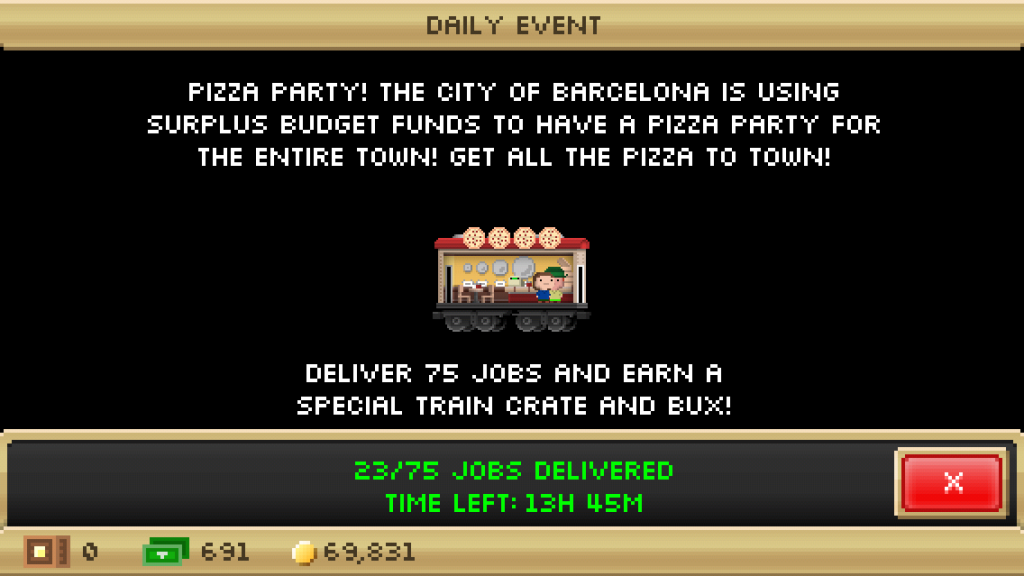 It’s great to hear someone’s opinion on why something is a better game or product, but as a reader I also want to see some validating points or data to backup claims. Here’s the top grossing chart data the first couple weeks Pocket Planes was out. 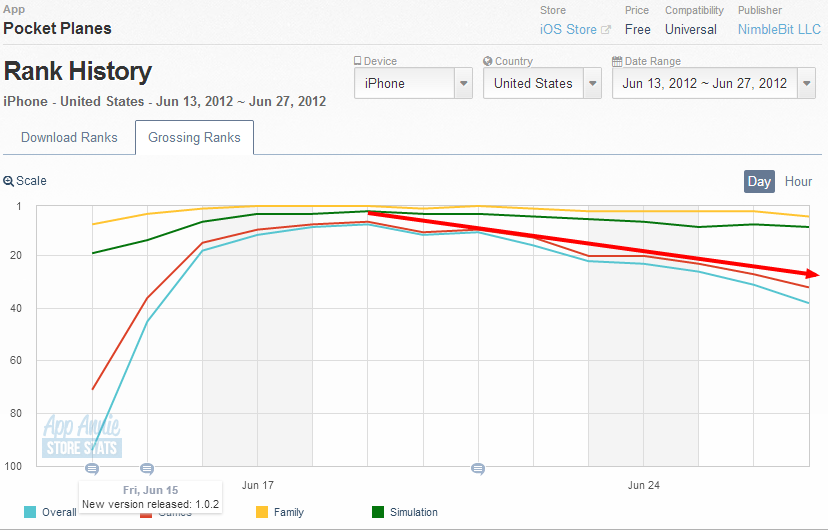 Above: Red is the trend

As you can see the game hit its peak on the 5th day and then began to decline. Typically in a freemium game you want your game to level out and maintain. However, Pocket Planes never climbed back up to the position that it was at and was/is on a constant decline except when updates are released. Let’s take a look at the Pocket Trains charts. 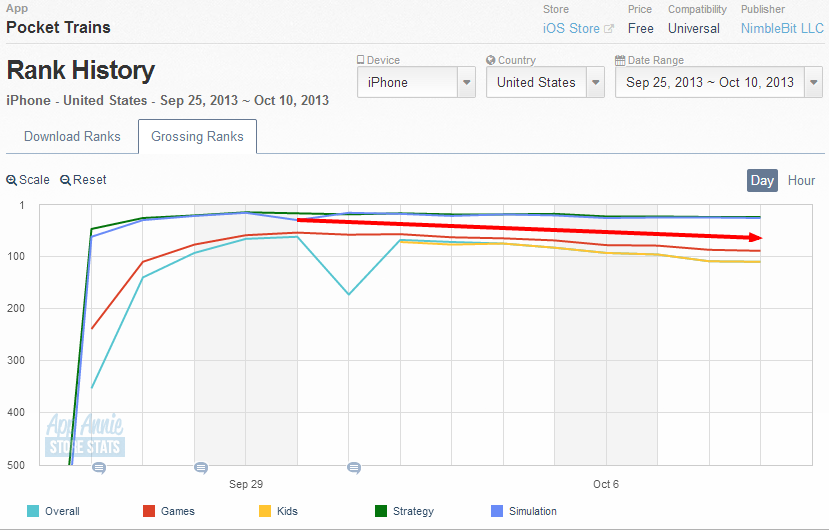 Above: Red is the trend