The word “free” is powerful. When paired with a product and plastered across billboards, commercials or the pages of print, “free” elicits a reaction. There’s an almost instinctual interest to at least hear it out; to listen, however suspiciously, to what “free” has to offer. Included in an advertisement or sales pitch, the word is as good as it gets. It’s manna from heaven. Unless, you’re selling a video game — then you’re screwed.

To the consumers of games, “free” is the black spot: a mark of prejudice and implied deficiency. Free-to-play has become synonymous with quickly developed and quickly forgotten games. Not because all free-to-play games taunt and tease and gouge you for time and money, but because so many of them have in the past. You could argue it’s deserved, and rightly so, but in the end, it doesn’t matter. Free-to-play games are now guilty by association — so sayeth the court of public opinion.

But the industry is changing — the business that drives it, the people that make it, the products that encompass it — these things are shifting in directions that defy preconceived notions or past infractions. In the future, “free” is going to be important. In the future, free-to-play matters.

As industry standards are elevated — and by association development costs — developers without those levels of resources just can’t compete in the same market, regardless of how innovative or exceptional their games may be. Though there are exceptions to the rule, these days if you want your game competing for attention against blockbuster franchises, you’ve got to spend money — great big yellow dump trucks full of money.

So what’s a developer with finite resources wanting to try something new or different supposed to do? They could affix a cost to their idea — however competitively it might be priced — and send it out to fend for itself, sure. But there’s another route around that first, often fatal barricade. Blue Manchu’s debut offering, Card Hunter, exemplifies this proposition.

Above: The crest of free-to-play excellence.

Card Hunter is a free-to-play browser-based online role-playing card game where players adventure with their high-fantasy parties to build decks with unlocked cards from collectible equipment. Just look at that premise through the modern-day design filter — it’s absurd. But as I discovered hours and hours of playtime ago, it’s also a diamond in the rough.

“The reason we made [Card Hunter] free-to-play,” Blue Manchu Managing Director Jon Chey told GamesBeat, “was to try to get people to play it.” And in my case, he was right. Had this little title entered the market at even a marginal price point, I would have missed out on one of the more charming, enjoyable experiences out there.

To put it bluntly: Had Card Hunter come with an associated price tag, I would not be speaking with you about Card Hunter. That’s not meant as a slight to Jon Chey and the rest of the team who no doubt painstakingly crafted the game, but it’s the side effect of a market saturated with easily accessible content. Twenty years ago I would have bartered and begged and clawed my way toward a new game — and I did — but now Mt. Cellophane has more hard-plastic stones than I have hours to pick away at it. And while time is certainly a resource in short supply, I’ll gladly offer up a small slice of it to learn more about your work. Free-to-play made that happen.

But getting people in the door is only part of the allure of free-to-play. We’re now in the age of the super-connected online community, where a multiplayer component is essential in all but the most specific cases, for better or worse. It’s another modern standard that’s difficult to deliver without the infrastructure and visibility needed to earn a robust player base.

If you don’t regularly listen at the door of Xbox Live Arcade, it’s possible that this week’s release of Ascend: Hand of Kul might have slipped by you unnoticed. An action RPG from Signal Studios, Ascend could arguably be considered the benchmark of console-based free-to-play games. Not for its detailed and atmospheric presentation, brutal hack-and-slash gameplay, or exhaustively deep customization — but, oh goodness, that certainly helps. 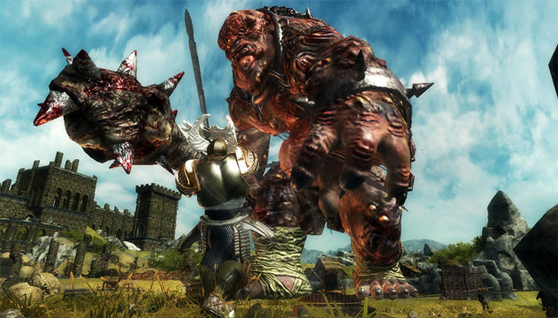 Above: Travel to exotic lands. Meet new and interesting people.

Ascend is a triumph because players are seamlessly connected to one another, both in the tangible world and throughout a larger metagame called the Crusade: a persistent war for dominion over the continent. In five days, Signal Studios’ free-to-play game has been downloaded more than one million times, according to President D. R. Albright III. Its ranks swelled with over 600,000 active players, each tugging on the balance of global power. This conflict spanning dimensions needs soldiers, and for a platform with limited visibility like Xbox Live Arcade, that ambition just wouldn’t be possible with the hamstrung player base that comes with a $20 downloadable title.

How do I know Ascend would have floundered with a price tag instead of as a free-to-play title? Truthfully, I don’t. But take a look back across the recent history of Xbox Live Arcade, where the bones of good multiplayer games dot the landscape. They’re home to a few die-hard souls still lingering within, launching vacuous matches against the same names and faces.

If you’ve never encountered this phenomenon, take a stroll through the jetpack graveyards of Hybrid. Wander the empty set pieces of Special Forces Team X’s procedurally generated maps. Picture the abandoned cybernetic hallways of Nexuiz — the only thing you can do since they’ve been locked away, shut down with the servers. All budget multiplayer games priced $10 – $20; all dried up.

Yet here stands Ascend, a million downloads in less than a week. Happy Wars, an online battle arena and the first free-to-play title on Xbox Live Arcade, still plays host to 400,000 monthly happy warriors a year after release. Even Spartacus Legends, a moderately enjoyable experience at best, loaded with bugs and netcode that makes online matches near impossible to enjoy garnered 225,000 players in its first week.

Without the free-to-play model, these titles would have likely struggled to retain a community, eventually losing their grasp on the best thing they have to offer – you. But let’s look outside of the closed ecosystem of Xbox Live Arcade. Would League of Legends be the altar of multiplayer dominance that it is today? Would Team Fortress 2 have survived this long without making the jump? What about World of Tanks? There are simply too many successful, meaningful contributions to gamers from all walks of life to disregard the power of free-to-play with sweeping generalities.

For argument’s sake, let’s forget the predatory examples of free-to-play: the coercive incentives, the progress barriers, the interchange of currency and commitment. We could all cite anecdotal evidence to the abrasive capabilities of free-to-play monetization models. My purpose here isn’t to argue for a lesser degree of scorn where applicable, but to reinforce the potential of free-to-play — in spite of itself — as something other than the bane of an expanding industry.