With a month to go until the launch of Sony’s and Microsoft’s next generation of console hardware, it’s easy to go into savings mode and just stockpile every penny you can for either the Xbox One, PlayStation 4, or both. Money-saving becomes an even bigger issue when you factor in the cost of games. At $60 a pop for each physical copy, they are going to eat up a lot of your budget unless you stick with downloads in the $20 range.

However, if you just want to scratch an itch for buying something new and aren’t too concerned with the graphical leap to the next generation, there’s a system available that can give you new experiences: the Ouya.

This Android-based console has endured a lot of growing pains and is easy to dismiss as an emulator box. While that’s one way to justify the $100 price tag, the console offers up far more than that thanks to its open development approach. Sony and to a lesser extent (with some kicking and screaming possibly involved) Microsoft have embraced it as well. This means that Ouya is a very indie-friendly platform, and as anyone who has visited the Xbox Live Indie Games marketplace can attest, the term indie doesn’t always mean good or polished. But so far, Ouya’s storefront has been filled with relatively few god-awful games. It’s got a lot of middle-of-the-road stuff and some WTF-level titles like The Amazing Frog and Badass vs. Hipster that are so bad they’re good. 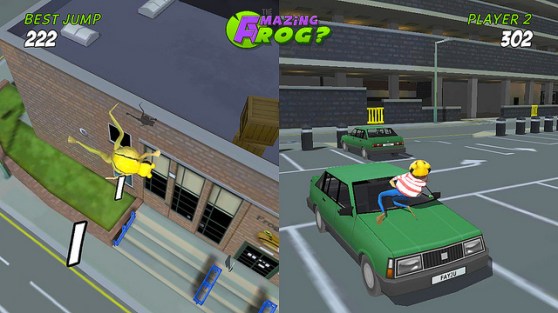 Right now, the system has a fairly impressive lineup of great games that you can’t play on any other console. Not every one of the nearly 500 is amazing, but some stand out. The free-to-try nature of every single game on Ouya gives owners very few reasons to pass on a promising title although that model varies.

Some games are completely free, like Diversion, Sector Strike, Acid Trip, Always Be Shipping, Just Rain, and Verminian Trap. Others give you a lot of content for free, like Gnarbike Trials, League of Evil, or Reaper. Most provide just enough content for you to see if you like the game before it’s put behind a paywall. This approach means that you’re able to experience the core mechanics and judge how good a game looks and sounds before spending money on it. Xbox Live Arcade does the same thing, but given that this free-to-try model covers every title on Ouya, it’s a very important feature for consumers.

The best of the best

If you know what the Ouya is, then you’ve likely heard about how great TowerFall is. The couch co-op action-platformer is outstanding, but the platform has seen a variety of other excellent releases that were either overshadowed by it at launch or came out afterward. Reaper was just released in the middle of September and is one of the most stunning games on the system.

This 2D side-scrollng action role-playing game controls like a dream during combat. Given that it’s a touch-based game, the amount of depth in combat is surprisingly high. You can dash using the left and right bumpers, jump, double jump, spring off items in the stage, and chain attacks together. There’s even a spinning slice that comes in handy for battles against a lot of smaller enemies, like bees. Other than some clunky menu controls that can be fixed with an update down the line, this is an easy recommendation to check out for $3 at a minimum for the full game or $5 if you want access to some extra items.

While Reaper will satisfy players looking for a more action-oriented RPG, those seeking turn-based battles should find Saturday Morning RPG to their liking. It’s a humorous, reference-filled, JRPG-influenced game with a pixel art style. As a young everyman seemingly born in the ’80s named Marty, you’ll need to take on the vile Commander Hood and save your girlfriend Samantha.

Combat is turn-based and relies on a lined meter to determine the damage done with each blow. If you line things up perfectly, you’ll do a lot more damage. A power-glove-wearing Wizard grants you a magic Trapper Keeper folder that you can scratch using the on-board touch pad to gain temporary boosts in skills. Tapping it also lets you defend attacks, go all Super Saiyan on enemies, or moonwalk your way to victory. It’s a great looking and sounding RPG with a silly sense of humor that will tickle the fancy of anyone who grew up in the early-to-mid ’90s.

The free version lets you play quite a few battles and enables you to save your progress. You can buy the game at a discounted price by scratching a ticket, taking it down to either $5, $4, or $3 depending on your result. Some people have had issues loading their saves from the free game into the paid game since this scratcher ticket was introduced, so it’s best to not play for very long in the free mode in case that happens to you.

With traditional and action RPGs covered, it’s time to take a look at a melding of the two genres: roguelikes. This subgenre has become a major force on PC but hasn’t yet invaded consoles until now. One of the most accessible entries is Heroes of Loot. This action-heavy game features combat that will feel right at home to fans of the overhead The Legend of Zelda games as the gameplay consists of you going around the levels and attacking enemies.

There are four classes available, with the warrior offering up more of Zelda-like experience with a sword, but the wizard is really the best overall character and has a ton of long-range attack options thanks to power-ups. He’ll be a lot more fun to play for beginners or those who just want to see a bunch of enemies die really quickly in succession. The free game gives you access to three full stages, which is enough to beat dozens of enemies, go to at least one shop, and tell if the you like how the game plays. The controls are smooth, the graphics use pixel art nicely, and the soundtrack is fun to listen to as well. It’s a great buy for $3.

These are just three examples of excellent games that can only be found on the Ouya and are conducive to sinking a lot of time into during a single play session. It may seem a bit odd to have it be an RPG-centric list, but a lot of the system’s most critically acclaimed titles can also be found on either the Xbox 360, PlayStation 3, or DS.

Many of its other recommended exclusives — like Knightmare Tower, Sector Strike, Night Riders, Flashout 3D, and Stalagfight — are fun in very short bursts but aren’t the kind of experiences that will likely hold your attention for an extended period of time — although Towerfall can certainly be a time sink with friends around. I also excluded compelling games that can be sideloaded, like the Riptide GP titles, whose instability can lead to crashing, iffy controls, and overall lack of optimization for the Ouya hardware.

At a mere $100, the Ouya is well worth the price for fans of indie or niche gaming since it has strong entries in a lot of genres. It’s also a wonderful system to experiment with if you’ve ever wanted to but feared issues with your warranty. It welcomes sideloading and tinkering with software to get more out of it than you would with a basic store-bought unit.