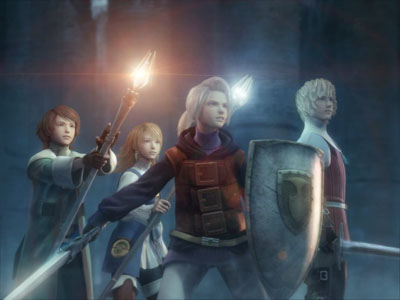 Four young warriors are called upon by a crystal of light. The crystal, being able to talk for some reason, warns them of a dark force that is threatening the very balance of the world and, granting special powers unto them, sends them out to rectify this imbalance. This version of Final Fantasy III has been completely rendered in 3D, similar to The Legend of Zelda DS games, with plenty of cutesy characters with watermelon sized heads and shiny special effects. The story has been expanded upon also, giving each of the previously unnamed warriors a little back-story and allowing them to develop more intimate relationships with other characters.

The easiest and fastest way to explain this game is with the following trailer. Please take a minute to watch it:

That’s right. What you see there is a remake of the game Pong. As in, the original Pong, with two paddles and a ball. They added any number of different ‘arenas’, better graphics and slightly twisted gameplay elements, but it was still just Pong. A game that will probably feature on the Google logo someday, and that Atari managed to market for about thirty quid 20 years after it was released.

Final Fantasy III is a game that receives the exact same treatment, only disguises it far better. Bear in mind that this is based on a NES game, therefore making it a fairly dated RPG with just a lick of paint. Which is not to say it isn’t good. After all, this is classic Final Fantasy. The issue is that, unless major aspects of the original game were to be modified, it just doesn’t merit a remake.

It improves on the original game, true. But improving on an RPG from 1990 is like eating an orange: it’s pretty hard to mess it up. When you consider that a direct port would probably cost about €5 on the Wii’s Virtual Store, you can’t help but feel a little bit ripped off. You’ll be made especially aware of this when you realise that the dual screens and touch screen features of the DS are barely utilized at all. You have the option to use the stylus to control your characters, but no one is going to entertain this notion for long.

Would a mini game involving whipping the hell out of a chocobo with your stylus have been too much to ask for?!

Still, as this is the only version of Final Fantasy III available to the West (unless you want to download a badly translated Japanese fan version), it certainly merits a go. The original Final Fantasy was a solid RPG and this sequel tightens nearly every aspect of that game.
Turn based combat is still present and the experience point system makes a welcome return after the woeful travesty of the Final Fantasy II level up system. The gameplay is largely unchanged. Expect to go on many quests that function along the lines of: “You must destroy the Prince of Discomfort in order to obtain the Hairbrush of Hope in the Cave of Slimy Things”.

At its core, Final Fantasy III remains a typical, yet enjoyable, RPG.

The main leap forward that the original made back in 1990 was the inclusion of the job system, a trope that continues to crop up from time to time even now in the series. Unlike the original, you now have the option to change your class at any point in the game.

Sick of being a Warrior? Change over to become a Thief!
Red Mage not doin’ it for ya? Upgrade to the Sage class!
Black Belt too boring a career? Become a  Dragoon!

This allows for a layer of complexity, meaning you can switch your job titles in accordance to upcoming battles and events. And if a certain class isn’t working out for you later in the game, you aren’t stuck with it as was the case in the original, thus causing you to swear a lot and get grounded. The remake retains all of the jobs from the original, while making improvements to the system so that jobs don’t become redundant as you progress.

However, as the main selling point of this game, the system falls a bit flat. It isn’t nearly as complex as it once claimed to be. Anyone who has played Final Fantasy V or even X-2 will immediately be familiar with the system and almost certainly find it to be overly simple.
The Card Games in Final Fantasy 8 or 9 are more complicated than this system. In addition to this, every single job has been seen in later games in the series, so there is little incentive to experiment with jobs you know aren’t suited to you. No one is going to select jobs like the Scholar, Geomancer or Dark Knight when they already know that they’re about as useful as a glass hammer.

Another flaw with this system is that, once you’ve found a balance that works for you, you’re pretty much golden for the entire game.
The traditional party of Warrior, White Mage, Black Mage and Black Belt saw me through to the very last dungeon. Annoyingly, this party, while perfectly stable for the entirety of the game, got pretty much creamed, repeatedly, by the Final Boss. This meant that I had to switch the jobs of every character and build up their classes for a solid two hours before seeing the end credits. Because you know, a bunch of names on a black screen, worth it EVERY time.

These are the more glaring flaws of the game, but it is nonetheless an enjoyable experience. Like all good Final Fantasy games, it is the story and characters that really make it shine. Admittedly, it is a dated narrative (anonymous evil force threatens the world *yawn* oh and we’re the good guys? What a novel twist…), but still effortlessly charming. The plot has the odd twist and turn to stop you from getting too bored, and flying around on an airship still remains more fun than it has any right to be.

It is a particularly nice touch to add a back story to each playable character. You now start off with a young boy, Luneth, and you meet your other friends over the course of time. The intricacies of their friendship were never going to be as ambitious as, say, those of Final Fantasy VI, but they are nonetheless appreciated in this modern age that demands relatable characters and believable scenarios.

To be fair, when you see the words Final Fantasy, you probably make a fairly immediate decision whether or not to play the game in question. It is an early installment of the main series and therefore a decent assurance of quality, if you like that kind of thing. It has all of the basic elements of the classic RPG, with exploring, leveling up and battling being the primary focus. The job system feels dated, but if used well, won’t act as a hindrance. And while the visuals are rarely stunning, they are a major improvement on the standard 8-bit sprites of the NES days.

A bog standard RPG with a nice bit of polish.