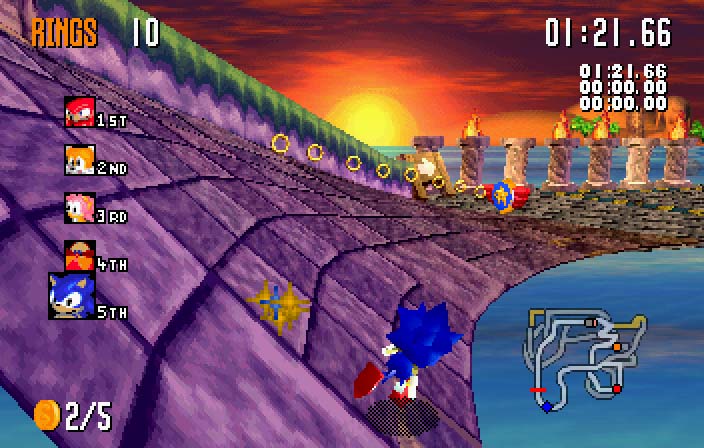 Well, this is pleasantly retro eh?

It may come as a shock to some, but Sonic the Hedgehog has actually been sucking long before his foray into modern consoles. Unbelievably he also didn’t have that many racing titles back in the 90s. It’s pretty strange that a character whose principal selling point is speed didn’t really cash in on this sooner. There were one or two titles called the Sonic Drift series, although these had Sonic and his friends in cars rather than on foot, and they felt only vaguely associated with the character.

It is as simplistic a game as they come. There is literally no story line, it’s just a racing game with a bunch of familiar looking mascots. Oh dear, I hear you say. I know. At least other crappy racing games made an attempt at a story, to show they were serious. But oh no, not here. The reason this game is so easily forgotten is because…well, because it is so forgettable! But people also forget that, at the time, a 3D sonic game was a pretty huge deal, and as a launch window title for the Sega Saturn, tension was pretty high.

…or at least, it was for me. And this was a crushing disappointment, so much so that I still feel the burn of it, 16 years later. So let’s reopen old scars. Let’s examine a game that Sonic purists write off as ‘non canon’. Let’s shatter some game developers egos.

Frankly, this is one of the most shameless attempts to sell a franchise you will ever see. And this is something Sega is known for, especially when dealing with their speedy blue mascot. But often they are forgivable acts, because we all remember those good old days when playing Sonic the Hedgehog on the Mega Drive, killing robots to free the animals that were trapped within and never once questioning how the that kind of technology worked.

Let’s get one thing out in the open, Sonic R sells itself entirely on the fact that it has Sonic the Hedgehog. Take that away, and this game wouldn’t even be remembered for the pile of intrusive stinkweeds that it is. When you look at the slew of Sonic games that have been released in recent years and think “This is the lowest point for Sega”, then be thankful you never suffered the slap in the crotch that is this game on launch day.

There are a grand total of 5 tracks, one of them being unlockable. When you consider the fact that Super Mario Kart, a game on a previous generation console, had twenty tracks, you can’t help but visualize the President of Sonic Team, wearing a monocle and tea from a diamond teacup, throwing money casually in the air and laughing manically.

The tracks themselves are also woefully lacking in originality. Example: one track is a city based course, while another is an industrial based course….Goodness, the ideas barrel must have really been scraped dry…. In order to ‘make up’ for this, the game implements different weather conditions randomly on each track. Again, this hardly makes any difference at all, the only major change being that the water freezes when it’s snowing.

Innovation, thy name is not Sega.

So what else is wrong with this game? Well, casual reader, there’s also the characters. You start with only four, Sonic, Tails, Knuckles and Amy. If you clear the game, the can unlock Robotnik. If you collect five special ‘Sonic coins’ hidden on each track, you can challenge and unlock 4 more bonus characters. And if you can collect all 7 chaos emeralds, you unlock a Super secret bonus character who I have absolutely no qualms about revealing to be Super Sonic.

Honestly, who did you expect? Espio the Chameleon? Now this probably all sounds fine, and in theory it is. A quite respectable amount of characters there for an older generation game. But my problem is this: Characters are either A) painfully useless or B) identical to other characters. The athletic skills of characters like Amy or Robotnik adequately mirrors their general popularity (i.e. they are awful)
Why is Amy in a car? And how is a car, or hoverthing (whatever it is Robotnik flies in) slower than everybody else? That goes directly against the primary function of a car…. To be fair, this is a complaint that applies to all characters. Even Sonic, who zooms about at high-speed most of the time, is barely trotting along, like a bloated pig in second hand Nikes. Regardless of how old the game is, Sonic R clearly could have conveyed a more convincing sense of speed, if it had rested in more capable hands.

The other issue I mentioned is that unlockable characters are essentially identical to the primary characters, depicted as either robot or doll versions of the original four. Robot Sonic, Robot Knuckles, Robot Robotnik and Doll Tails. Worth unlocking? Well, let’s put it this way: It’s like being viciously mugged and then, after crawling slowly out of the alleyway, paying to have some very similar looking muggers repeat the process.

…while reminding you what a terrible game Sonic R is!

Another issue with Sonic R, and one which seesaws in quality throughout the entire franchise, is the astoundingly irritating soundtrack.
It sounds as though it is conceived by a group of disgustingly good looking teenagers, all of whom are wearing ‘I love Life’ t-shirts.
Every single course has its own variation on some of the most odious music ever conceived. It is grotesquely upbeat, mind-meltingly cheesy and just a generally unappealing noise to compliment the uninspired gameplay.

Though, when it comes to the actual gameplay, it must be said that it is semi-playable, but only just. An annoying little quibble is the fact that there is no reverse button, and it takes several agonizing seconds to turn a character around if s/he has run into a wall. The only real challenge the main game offers is in finding the Sonic coins and finishing the race in the top three.
But it only requires two playthroughs of a racetrack, tops, so it is once again a delaying tactic.

In addition to the main game, there is also time trial mode and this has a few standard enough mini-games on offer. As well as the by-the-numbers time trial mode, there is also Balloon mode (grab balloons) and Tag mode. I have to admit, Tag mode is a very fun concept but badly executed here. Essentially, the tracks are treated like giant playgrounds, with characters going in all directions to try and avoid you. If the AI wasn’t so pants-on-head idiotic, it’d be an excellent mode and maybe even a game-changer.
Sadly, it is all too easy to catch each racer and the mode isn’t even included in the multiplayer, an astonishingly foolish exclusion.

Because when you get right down to it, multiplayer is one of only two minor saving graces that Sonic R has, a term I use exceptionally loosely. It isn’t so good that you’ll keep coming back again and again to it, but multiplayer is FAR superior to single player mode. You have a race and a balloon mode and, provided you and you friends are competitive enough, this can keep you entertained for up to twenty minutes.

The only other saving grace is the last secret character that can be unlocked. Once all chaos emeralds have been collected, you gain access to, of course, Super Sonic. The only reason this is a good thing is because he is the fastest character in the game and reflects what Sonic R may have been. While playing as him means that there is absolutely no challenge whatsoever, there is a strange sense of satisfaction, but NOT exhilaration, as it should be. If other characters could attain this kind of speed, Sonic R may have been a semi enjoyable title.

It’s a shame when a much-loved franchise begins to churn out spin-offs that bear similarities in name only rather than quality, and this is pretty much where it all started. Major Sonic fans will probably try to convince themselves, and others, that this game is passable. But tear away the blue hedgehog-y disguise and you will see the festering corpse beneath. This is a shallow and pointless game, made only barely playable when in multiplayer mode. Fans may give it a passing glance, simply to see how far the series has sunk, but everyone else should steer well clear.