If you’re no stranger to GTA Online, none of what I’m going to say will be news to you. But if you’re someone that has finally decided to take the plunge, there might be a few tips here that could give you a slightly better edge than the papier-mâché passing for bulletproof vests in this game when you liberate a few bucks from someone who clearly didn’t need them. A lot has changed since the “rough” launch in September.

One of those changes was the amount of cash awarded in the missions given to you by NPCs like Gerald, Simeon, and Madrazos. In short, these rewards were cut by 50% or more across the board for most of the missions because Rockstar thought players were earning money too quickly. The San Andreas gold rush is partly over, but here are a few things I learned along the way to deal with the new economic order along with some old tricks that are still pretty useful.

My favorite ones? Parking decks and tunnels.

In the city — a loading screen tip confirms this — subway tunnels are incredibly useful for hiding out in from everything, even up to a five star alert rating, unless cops chase you down there.

But even if one or two bravely do, knocking them off often clears the way to just wait things out as the rest wander outside drawing straws on who will be the hero.

Parking decks are also really useful but a bit trickier to use if the cops are on your tail. If a cop isn’t right behind you when you finally find one, the odds are usually really good that they’ll gather around outside and keep to the lower levels while you race upwards. These and tunnels also help keep pesky choppers from spotting you from above (just don’t head to the top of a parking deck to expose yourself).

Above: The only thing to worry about using train tracks? This.

Train tracks can also be useful! In the city, they’ll usually lead to subway tunnels or bridges and trestles where the cops are a bit less willing to chase you onto. Sometimes the occasional car does if it’s already following close behind, but on the whole, they won’t brave running into a train the way you might. Choppers are a bit harder to dodge in the open outside the city, but you’ll also eventually run into a tunnel depending on where you are if you follow the tracks.

I’ve also read that using helicopters are also pretty useful getaway vehicles for robbing stores, so venturing to the airport, the military base, or Lester’s airfield in the Sonora Desert might be worth checking out before embarking on your crime spree.

The ability to call on Lester to remove the heat from you unlocks when you hit level 21, which can be very useful as long as you have $500 in scratch to pay him off and as long as the cops aren’t right in your face.

But he’s not available on every mission. Lester will be simply be “unavailable” in those instances such as in Hack and Dash, a mission that unlocks at rank 60 and hits you with a three-star wanted level during the job. But in another mission, Extradition, which unlocks at rank 50, he’ll be more than happy to help out even after breaking into a military base. Go figure.

Also useful if you’re on the run, such as when you have a quiet moment after taking down that armored car. Or are hiding out in a tunnel or parking deck and just don’t want to keep waiting. 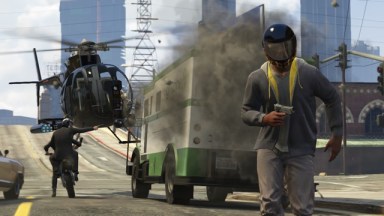 Above: Hitting an armored car is usually straightforward stuff unless there are other players after the same thing.

Armored cars are nice … to attack

But they seem to spawn much more rarely after the last patch. At least in my game.

They’re like a packaged job on wheels with several thousand dollars of loot (I’ve gotten eight or nine thousand from time to time) and a nice chunk of RP (Reputation Points, GTA Online’s version of XP) that I’ve seen range between 2,000 and 3,000 per shot. I haven’t actually seen one in public online sessions but have in solo or invite only ones. Not sure what the story is there.

Busting them open with a sticky bomb tossed onto the rear doors has worked really well for me and I just wait for the loot to spawn in as the truck usually keeps driving on. After that, it’s time to escape and find a nice place to hide afterwards as the police come charging.

For the return on the time spent doing this, mere minutes or less if you’re near a convenient tunnel or parking deck, armored cars are well worth the effort to take down. If you can find one. And if another player isn’t gunning for the same target should you be lucky enough to get one in a public game.

Some jobs are worth taking, others have become hot garbage

After nerfing (greatly reducing) so many of the cash awards from missions, what happens now is that players finishing a job for the first time will get the original reward value for it. Repeating it will net only half as much later. Ah, the good old days…

Some jobs definitely needed tweaking, I won’t argue that, especially when players could still repeat missions right after they were done without hoping that it might come up again the next time they called out for work. “Violent Duct”, a mission that unlocks at rank 15, used to pay out $9000 per in the first few weeks after launch. Then it was reduced in half. And then it was nerfed even further to only $1500. It was heavily abused because it really didn’t take all that long to do.

A few of Madrazo’s “hits” also felt a tad overpriced — $9,000 or even $10,000 per hit for only a few minutes of work, often in even less time than it took to clear out Violent Duct. Rinse and repeat. 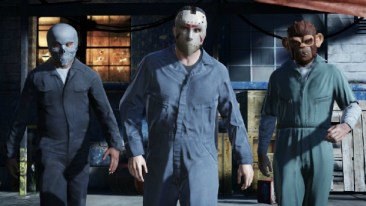 Above: Heists aren’t in yet but Rockstar says to stay tuned.

But others did feel as if they deserved a bit more for the effort put into them. “The Los Santos Connection,” which unlocks at rank 40, is a multi-part mission requiring hacking, traveling to a new location, lots of shooting — and now rewards a cool $8,000 instead of the $16,000 it used to. “Base Invaders” is also another one that could have gotten away with a slightly lower reward from its formerly $25000 payout — but by half?

A lot of this is also weighed against time and effort — some reward just enough to make the time burned on them worth doing depending on your play style.

I’m not the fastest person in the world in doing “The Los Santos Connection” solo or even with a crew, but I could probably get away with two of Madrazo’s hit missions solo in the same span of time for a combined payoff without as much drama.

…but sometimes, doing garbage jobs are worth it

Once you start hitting much higher levels in the thirties or the forties, jobs from Gerald and Simeon just aren’t worth the time anymore. But they can be useful in getting the jobs you might want.

What I usually do is call up Gerald, Lester, and Madrazos, see what jobs they have on tap, and if none of them offer anything good, I’ll take one of Gerald’s trash jobs.

After finishing it, it clears the phone list and then I call everyone back up again to roll up something better. For me, it might not necessarily be faster, but it’s more interesting than switching back to GTA single-player and then back online (especially if you spawn in a property, like one of the bigger apartments, where you need to spend time walking to the door and going to the garage — why they don’t allow you to run in your own house is just strange).

Or, you can hit an activity like racing instead. Burning through a short race, for example, will do the same thing…and earn you reputation points in the process, too, while clearing your phone list. And with other people, you’ll be earning cash and points while hoping for a better mission from your call list.

And don’t forget, you can also sell cars for a few extra bucks, place bets on races, claim bounties on players, rob businesses, or just go after other players. Braving jobs with others also nets you a small percentage bonus to cash and reputation earned. You might just have to watch out for anyone trying to kill you afterward before you can make it to an ATM to bank that cheddar.

Money might not flow as freely in Los Santos as it used to before, but it’s still there and as Rockstar pointed out above, they’re still in the process of “balancing” things. So, everything said in this post is liable to change sometime in the near future. Again.

If you have any tips of your own that you want to share, be sure to let the community know in the comments!