As of this writing, Konami made two of the biggest pieces of DLC completely free, both of which which add additional story to Metal Gear Rising: Revengeance by introducing the perspectives of two of the title’s key characters. It was as if I needed another reason to get back into this game and feel reminded of the possibility of a third-person Strider. If Platinum were to take a shot at Strider Hiryu, I imagine that the game could have been something like this.

Revengeance wasn’t always Platinum’s. Metal Gear meister, Hideo Kojima, and his team worked on a preliminary version of the game simply called Metal Gear Rising featuring an innovative “cutting” mechanic with which players could slice and dice objects with unprecedented control. The problem was in trying to build an actual game around that idea, a concept which had included heavy stealth elements fashioned with protagonist Raiden’s speedy saber skills in mind.

Rising was quietly canceled in 2010 until a conversation between Kojima and Platinum’s Atsushi Inaba revived interest in it, shaping it as a Platinum-focused redesign eschewing the stealth and now aimed squarely on blistering, fluid action. Seasoned vets from both Metal Gear, such as Hideo Kojima and Yuji Korekado, to Platinum’s own Atsushi Inaba and Kenji Saito both of whom had also worked on Bayonetta, would merge their talents in making it happen. The script was tweaked, enemies changed into cyborg strawmen appeasing the strict censorship requirements of Japan and deftly avoiding the kind of controversy that might have followed more squishy targets, and Raiden was ready to make another debut affirming that his persona in MGS 4 wasn’t a fluke. 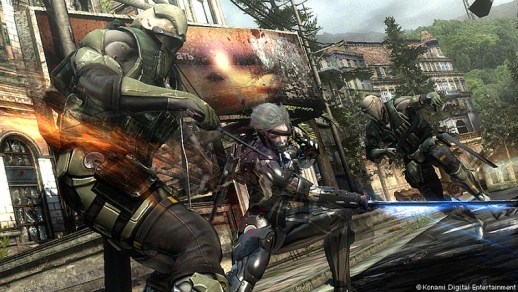 Above: Rising’s slash ’em up action retools Raiden into a one-man, cyber-army of doom. But it’s not all button mashing, unless you’re looking to end up as spare parts.

The result is a cybernetic sci-fi story drawn from the kind of political dirt and moral clay that Hideo Kojima has set into Metal Gear’s foundation. It’s also Platinum’s baby – outrageously explosive, has a guy swinging a multi-story robot by its tail at the beginning, and all of this coupled to clever combat mechanics focused on delivering devastation with every strike. Or something close to it.

An upgrade system rewards Raiden’s evisceration of his enemies which, aside from the usual fodder, include walking platforms like the Gekko to the leaders of rival PMC, Desperado, earning Battle Points or “BP” as a sort of in-field rating for his performance. These can be spent to unlock additional enhancements for his weapons or even purchase those unlocked through specific events such as finishing the main story. A grading system measures your performance in each stage adding another layer of replayability, testing players to push themselves even further to score a coveted “S” rating.

The combat system does take a little getting used to – especially with the controlled slashes in Raiden’s “Blade Mode”. While in Blade Mode, the world around Raiden slows down to a near crawl while a limited amount of fuel cell energy quickly burns off as you maneuver his blade for an aimed strike. It can be manually aimed using the right stick to manipulate the line-path the blade will follow before you trigger it, or you can opt to use the face buttons for quick, pre-determined slashes, after using the right stick to tweak where they will roughly go. But make no mistake – hitting something while in this mode with either result in fileted cyborg or a well-timed critical blow, especially against a boss.

Raiden can find “cyber paste” throughout the game to patch his wounds in a flash, or slash more enemies to recharge his fuel cells as they pull energy from his foes via his blade. But doing a “zandatsu” on a foe in Blade Mode by critically striking a specific spot lit up on an enemy and then chaining that to a quick button press, and Raiden will literally rip out the regenerative system of an enemy cyborg and instantly heal up and refuel his cells as he crushes it in his fist like a cyber-enhanced vampire. 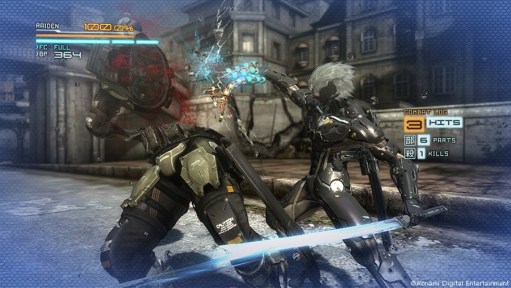 Above: I’ll take fries with that, please.

As I got used to this, especially after repeatedly testing myself running back through stages to earn more battle points, a better rating, and find secret easter eggs hidden within them, the system started coming together for me as I started chaining regular, button-mashy moves in with zandatsu in one, freely flowing ballet of ridiculously overpowered sword slashes and acrobatic dodges as a cyber-servo’ed Zorro hopped up on the speed of light.

The parry maneuver, in particular, adds another twinkling dash to the flashing chaos. Raiden has no “block” move – instead, the player has to simultaneously strike in the direction an enemy attack is coming from to parry. It sounds hard to do at first, but after getting the hang of this, it became an integral part of what was quickly becoming a chaining stream of blade arts that was nice to look at and felt as fun as a classic arcade beat ’em up…only faster. 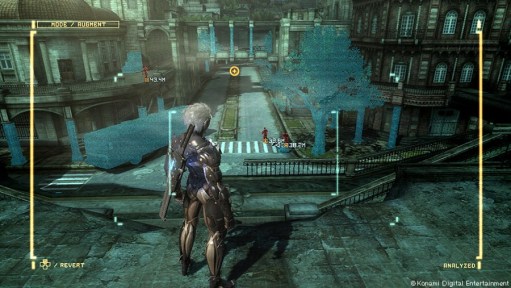 Above: There are still a few stealthy elements in the game that reward their own bonuses. Using Raiden’s ability to scan the environment, players can plan ambushes and find gaps in between patrols. Here, the hostages down below can actually be rescued and Raiden’s team will even comment on how quiet – or noisy – he is in certain situations.

Story-wise, it takes place four years after the events of Metal Gear Solid: Guns of the Patriots and it’s still very much drawn from the vein of Metal Gear while standing off on the side as its own story, though it also stretches things in its own strange directions that ask a lot from players to take in. Sure, it has the kind of action that I wouldn’t find in a traditional Metal Gear Solid, but at the same time, it still bears hallmarks of the series in its themes which touch on subjects ranging from child soldiers to questioning the place of technology and its use as a weapon of war. There might no longer be as direct a statement against nuclear proliferation in this game as Kojima was apt to include in his prior works, but the warnings are still as valid for what might replace them instead.

I’m still looking forward to diving back into the familiar CQC and stealthy trappings of a Metal Gear Solid. At the same time, Platinum added something so amazingly different to its lineup. It’s as if BioWare had asked Chris Roberts to build a space-sim styled game around Mass Effect, or tapped Blizzard to come up with a Diablo-like spinoff for Dragon Age.

Revengeance’s arcade born action is a thrilling gaiden taking the Metal Gear Solid world to a place no one had expected it to go with a character that fans had once regarded as something of a mistake. The action can be tough to get used to, the story pushing the boundaries of your own perceptions of the Kojimaverse. At the same time, there’s also so much of both spread throughout the game from time-scored VR Missions to the actual campaign that it’s hard not to enjoy the journey through something that might have seemed like insanity to many others in taking a risk with such an icon by tearing it down, building it up, and having it stand on its own as something new.