One of the standout trailers to emerge from the VGX awards was No Man’s Sky from developer Hello Games, the studio behind the racing-stunt series Joe Danger.

Not a lot was revealed other than it will have multiplayer elements and a lot of exploration, with players attempting to “reach the center of the galaxy,” according to a recent video interview on GameSpot. But the technology behind it boasts an amazing level of potential, which begs armchair space pilots to dive into the atmosphere of a planet and then go even farther, beneath the waves — all seamlessly created using an old technique called procedural generation.

In other words, instead of a team hand-placing every tree, rock, and house in an open world, it’s all done algorithmically. In many early games, this was an incredibly handy technique to get around the technical limitations of the hardware and create the illusion of huge worlds that would otherwise be impossible to realize.

It’s not without downsides: Procedurally generated worlds can be bland and repetitive as familiar elements are recycled and rearranged over and over again. At the same time, when it’s used well, it can easily immerse players, transforming them into swashbuckling adventurers roaming among the stars or crawling through the depths of a dungeon in search of treasure within a massively replayable world.

Below are 10 games that have used the technique to great effect. If you have a favorite that you don’t see on this brief list, be sure to let everyone know in the comments! 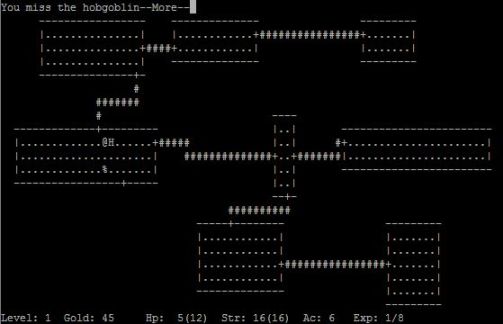 Above: I’m barely standing with only five hit points left. But hey, I’ve got 45 pieces of gold!

Developed in 1980 on Unix systems by Michael Toy and Glenn Wichman, Rogue was the granddaddy of the roguelike genre, featuring the basic staples that define it: randomly generated dungeons and loot every time a player starts the game. It even had a goal — to get to the deepest part of the dungeon to retrieve the Amulet of Yendor.

There was no going back to earlier levels, either. This was a one-way trip to the bottom. Dungeon-crawlers never knew what the game would create for them next, which made it a unique challenge that would be repeated by many others on all sides of the world. 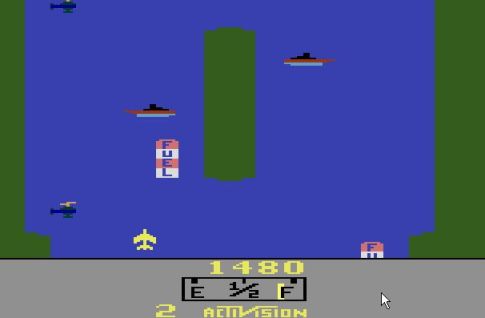 Above: It’s easy now. Things would get much worse later.

Carol Shaw, who has been called the first female video game developer by journalist Benj Edwards, was working for Activision when she created River Raid, which came out for the Atari VCS/2600. It was a top-down, vertical shooter where players controlled a small plane as they flew along a river, blowing up targets while avoiding enemies and trying not to crash into the “banks” on either side. To vary the shape of the banks using only 4K of ROM, Shaw used a form of procedural generation to create the illusion of an unending and varied river route. 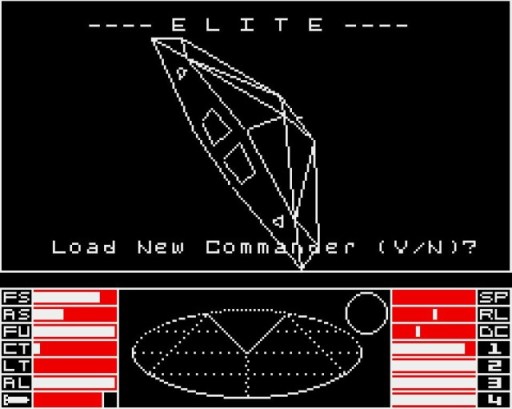 Above: The original packaging came with a big manual, novella, and a keyboard overlay to help immerse players in Elite’s universe. The game also first came out on a cassette tape in the U.K. And you thought you had loading-time issues.

In 1984, David Braben and Ian Bell’s innovative and revolutionary space sim Elite used procedural generation to create eight galaxies with 256 planets apiece, each with unique names, descriptions, and trade commodities. It became an incredible hit as would-be space pilots traded, pirated, and upgraded their way through virtual space crammed onto a single tape. It ran within 22K of memory, which Braben notes in an interview on GameSpot in 2006 as “probably even less than a single Frontier icon today.”

Now, thanks to a successful Kickstarter, Braben and his team at Frontier are hoping to do the same thing with more modern technology in Elite: Dangerous. 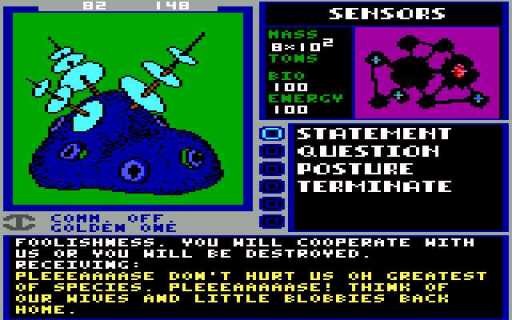 Above: This is just one of the aliens that players would meet roaming around space in Starflight. These guys literally had no spine. That is, until the sequel gave them ones backed by terrifying firepower.

Initially stuffed inside 128K of RAM and built by a five-man team (eerily mirroring No Man’s Sky’s humble start), Starflight’s vast universe populated with 800 planets used procedural techniques to craft each one right down to its ecosystems and resources. A number of other concepts were also used to generate random alien names for members of seven different races, all adding to the illusion of an interconnected galaxy filled with hidden wonders and making Starflight a truly iconic sci-fi title. 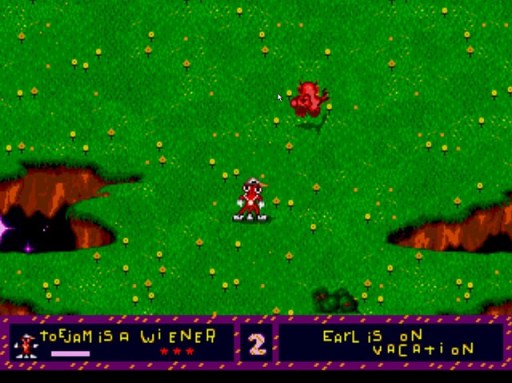 Above: The game featured co-op with another player (or solo play) across a randomly generated twilight zone of weirdness that became a big hit with fans for its funky aesthetics.

In an interview with Gamasutra, Greg Johnson, one of the creative minds behind the alien duo, mentions being a huge fan of Rogue in his college years. That experience would carry over into the design of Toejam & Earl’s randomly generated levels and loot on the Sega Genesis. Instead of an amulet, the duo went looking for pieces of their crashed spaceship scattered across bizarre levels — while doing their best to avoid natives — so they could get back home to Funkotron. 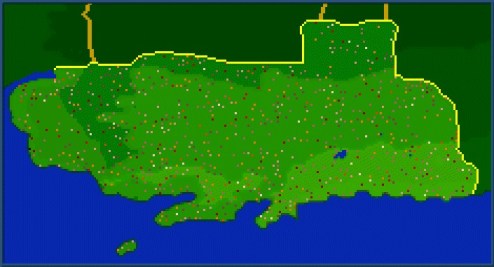 Above: Each one of those dots represented towns, villages, and dungeons. At least there was quick travel.

Bethesda’s epic sequel to The Elder Scrolls: Arena used procedural techniques to create a landmass roughly twice the size of Great Britain that was populated with towns, cities, and wilderness features. The dungeons were also generated in the same way from prerendered pieces and all jumbled together to create cave-like tunnels and bricked rooms linked by twisting passages.

Coupled with randomly generated side quests, players could technically adventure endlessly for loot and levels. It was also amazingly buggy on release, which dampened some of the excitement. But even so, its sheer size makes both Oblivion and Skyrim combined look like medieval suburbs. 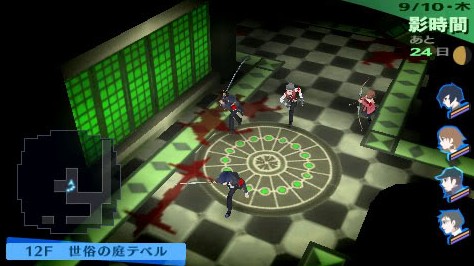 Above: Level layouts would change every time you started a new run on Tarterus, the mega-dungeon in Persona 3.

For many fans, Persona 3 is one of the best entries in the long-running Shin Megami Tensei series, which features an incredible cast of characters and a number of unique role-playing game elements. Although the main quest was fixed, the layout of each level of the massive dungeon were all randomly generated from set pieces, ensuring that no two visits would be exactly the same. This also added a challenging degree of uncertainty to the usual dungeon crawl, similar to that which roguelikes had long enjoyed. 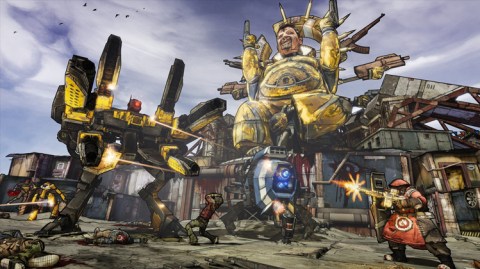 Above: Borderlands 2 upped the ante from the first game with a “bazillion” guns.

Using the same concept behind games like Elite and Daggerfall, Gearbox Software generated millions of combinations for the guns and other pieces of equipment flying free from the dead hands of bad guys in Borderlands. Gearbox’s system mixes and matches parts and pieces across a huge spectrum of statistics, creating the illusion of a near-infinite arsenal. Judging by the success of the series as a whole and the endless threads of posted screenshots showing off everyone’s favorite legendaries, it worked really well. 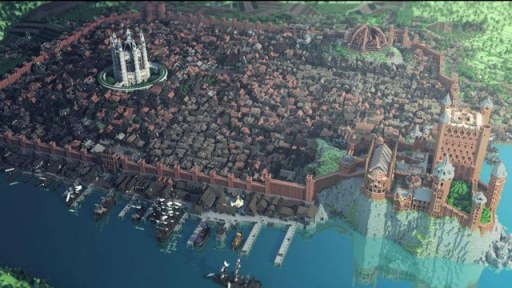 Above: Winter is coming. That’s probably something the person responsible for retexturing all of this when that happens doesn’t want to think about.

Markus Persson’s Minecraft literally creates itself on the fly using procedural techniques, which guarantee a nearly infinite variety of landscape elements and challenges. Though it started out as a survival game, its unexpected success as a virtual sandbox has enabled players to test their imaginations in building everything from super treehouses and would-be castles to famous landmarks like King’s Landing and the Wall from George R.R. Martin’s Song of Ice and Fire novels. 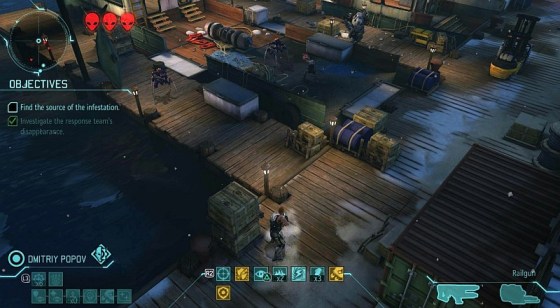 Above: Those crates, boxes, or even buildings might not be in the same place the next time you run a mission like this one. The aliens may not be waiting in the same places, either. Or with the same buddies.

The relatively recent 2012 reboot of X-COM used procedural techniques on a slightly smaller but no less important scale compared to other games on this list. Most mission types, their environmental layouts, and the enemies lurking in each would be just as random as the planets in Starflight or Elite, which kept the main campaign fresh outside of a few key points related to the story.