We already know they have created some pretty awesome games — as witnessed by their consistent status atop gaming best-seller lists — but how have some of the most popular video game creators designed their own websites?

According to the Cambridge, England-based web design house Doublespark, the following types of design elements can make or break a gaming company’s website  — and spell the difference between an effective site that increases customer awareness and sale or one that sends them clicking away in droves.

Let’s take a look at some of the top game companies’ own websites, which include examples that are sleek and stylish, indicative of the games themselves, or just crazily creative.

Mojang makes the popular Minecraft game, which is why an inquisitive look into their own website’s design brings a refreshing and curious observation. The website is clean and uncomplicated, with a plain white background that sets off the bold red text of headlines that scream about record-breaking sales of the Xbox 360 edition of the game: 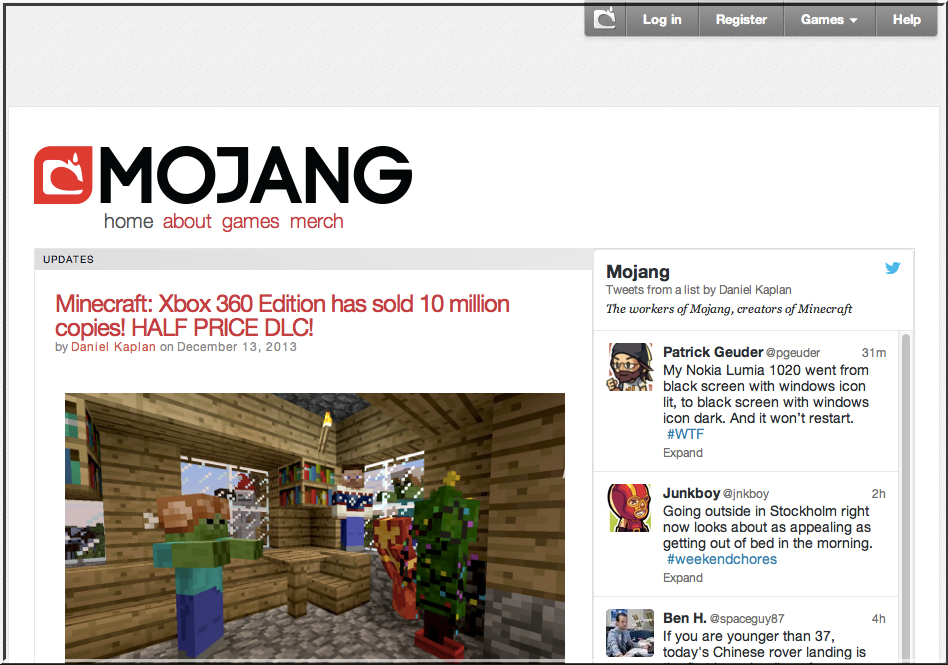 Other than that, Mojang.com employs a simple navigation menu that tells readers more about their other games and merchandise and a Twitter feed in the right-hand sidebar. The site is reminiscent of a clean blog whose main goal is to pass on information — and that’s exactly what this independent game developer’s website does: teaching us about upcoming games being developed and that you don’t necessarily need to throw millions into your studio’s site to be successful.

Rovio Entertainment Ltd. created the popular Angry Birds franchise, so it stands to reason that their Rovio.com home base would feature a version of their cash cow pretty prominently on their front page: 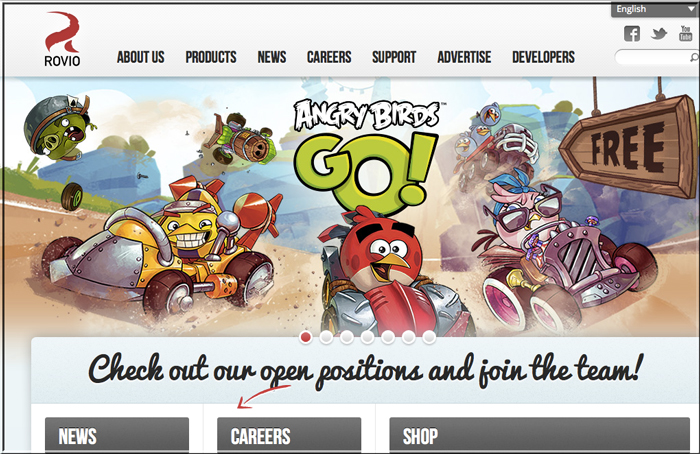 Nearly 80% of the homepage is filled with colorful images that speak of action, while the rest of the prime real estate space is saved for important navigational features and social media links.

“Check out our open positions and join the team!” exclaims Rovio, obviously putting their desire to beef up their staff in a can’t-miss position where avid game creators can see (and perhaps heed) the clarion call.

Unless you’re one of those who helped Toca Boca celebrate passing their 50 million game apps downloaded mark recently, due to the success of kid-friendly apps like Toca Hair Salon 2 and Toca Mini, you may have never heard of the game development studio.

Either way, one important lesson we can learn from the company’s bright and kid-friendly website is that they realize the importance of that popular web adage that states, “The money’s in the list,” which means that if you can grab the contact information of an interested customer just once, you might be able to sell to them over and over again.

Toca Boca — which curiously translates as “touch the mouth” from Spanish — uses their prime real estate website space to procure the email address of the person who likely holds the answer to the question, “Mommy, can I download this app? Toca Train is only 99 cents…please…” by adding a subscription box directly in most users’ line of sight that reads, “Parents, never miss another app!” 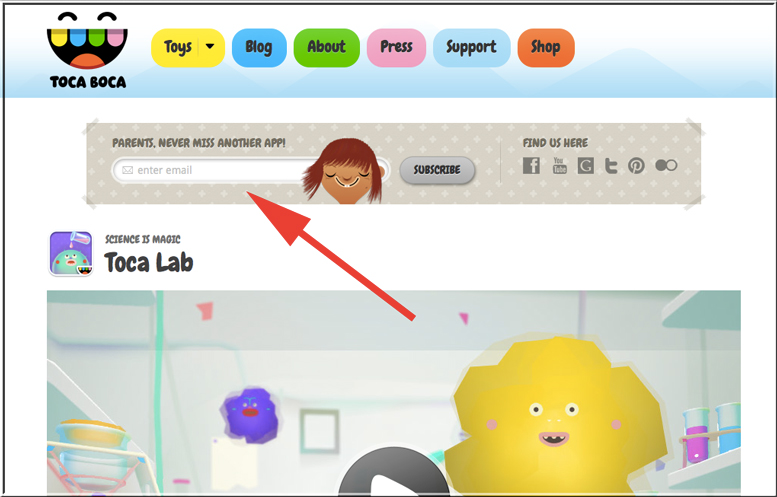 That kind of brilliant marketing plan keeps parents “in the know” about the company’s latest games coming down the pipe and a steady stream of revenue filling the coffers. From this brilliant firm, we can learn how gaming websites can be both fun to visit and utilitarian in purpose.

#4 – RelianceGames.com: Show off with sliders and make it easy for customers to buy

Reliance Games makes it easy for their website visitors to see the variety of games they create by making great use of a slider that rotates titles like Real Steel and The Hunger Games: Catching Fire Panem Run: 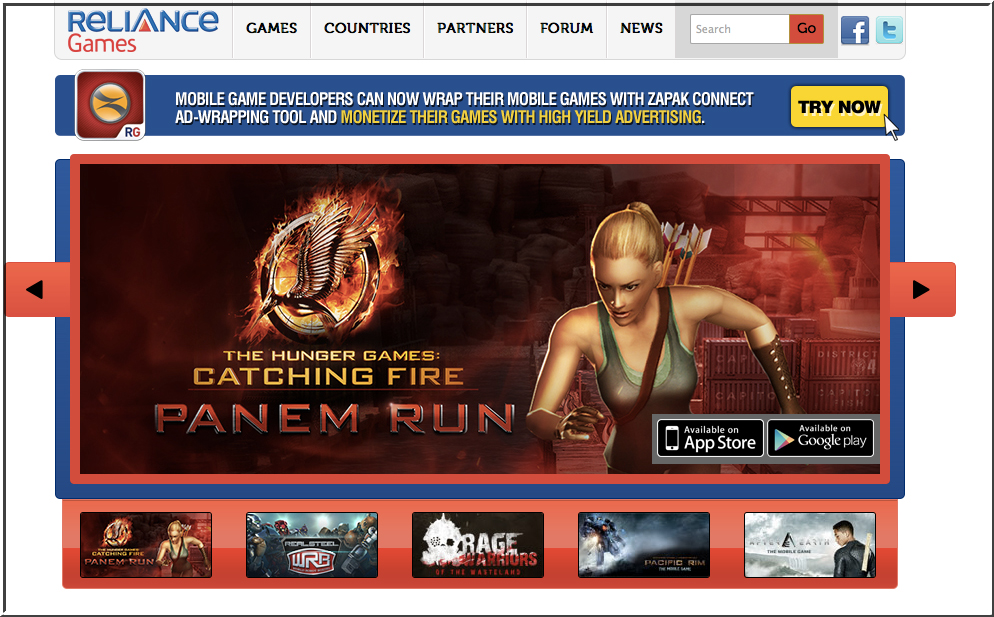 Another excellent feature within the large slider is the fact that the company includes direct links that lead buyers to the correct and precise locations in the App Store or on Google Play to easily purchase the game they want. This is a smart move because it’s a frustrating experience to have to hunt around on a site attempting to find the proper place that contains that all-important “buy” button that helps consumers throw money at game development companies.

Activision has been around since 1979, and this video game industry leader is still a major player and contributor — especially in light of the roaring success of the Call of Duty series.

It’s great to study the new and upcoming “little guys” in the field of gaming, but it’s also just as important to keep our eyes on the ones who’ve been developing games seemingly forever in an attempt to duplicate their successes.

To that end, a cursory review of the Activision website shows that they know where their bread is buttered, and they use most of their website space to show it off, which includes huge call-to-action images like this Call of Duty: Ghosts upgrade feature:

They are the epitome of the “keep it simple, sweetheart” philosophy. What can be easier than Activision’s “I want one” link surrounded in bright yellow against a dark background to help send gamers directly to a page with information about where to buy the product in question?