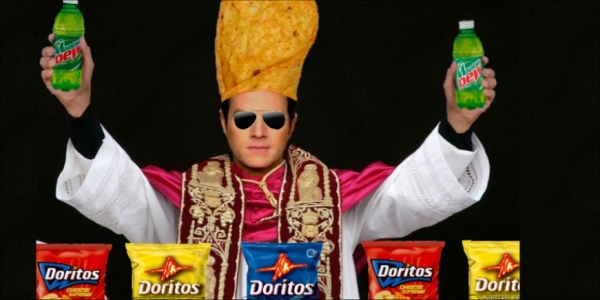 There was a phrase coined this year after gamers and gaming media butted heads on a number of occasions where the gaming community felt as if they weren’t being properly acknowledged nor their concerns heard regarding the state of the gaming industry. Gamers began calling gaming media a state of the Doritocracy because it seemed as if the interests of gaming media was not in favor of gamers.

So what is it exactly, the Doritocracy? What does this term mean or stand for? Well, quite simply put it’s almost an unconscious convening of some members from enthusiast media aimed to – sometimes unknowingly – protect and proliferate pro-corporate culture in gaming society. The institution isn’t always a hateful juncture of press meets consumer, but sometimes the things that happen in game culture deserve more attention (and in the right ways) than what they receive. Here are the top 5 moments of 2013 that really rustled the Jimmies of gamers due to the politics of gaming media.

Gamers ask for very little (that isn’t really true, but we’ll go with it for now) and one of the little things that they ask for is that reviews maintain a modicum of honesty, truth and information. When a game tries to ram-rod you like a beefy prisoner in a guard-free shower room with broken features, DRM or microtransactions (and sometimes, all three) gamers want to know about it. I mean, who likes anti-consumer surprise buttsecks? I know I don’t and I know some of you don’t either.

Sadly, gamers were on the wrong end of that ram-rodding when Creative Assembly and Sega released Total War: Rome II at the end of the summer to mostly glowing reviews. So what was the problem? Quite a bit actually. Many of the reviews failed to mention or bring up that majority of the game launched broken, something gamers only found out after they bought it. It was so bad that Sega’s own PR warned reviewers (but not gamers) about a few issues before the game even shipped. Even worse than that, reviews went up before the day-one launch patch was issued, meaning their version of the game was even more broken than the uber-broken game that shipped out to gamers. The community wondered high and low how reviewers skipped over so many borked-beyond-recognition bugs, glitches and crashes; but reviewers managed to do so, with many saying nothing about those issues in their reviews. It was only after a thorough lambasting by Angry Joe and the gaming community did Creative Assembly get put under enough pressure to quickly issue patches to fix the problem.

Barely a week into their launch and the PS4 and Xbox One ended up breaking hearts and causing frustrations like a bad rom-com from Matthew Broderick and Meg Ryan. The issue that people took most to heart was a little something-something called microtransactions. The two biggest culprits of altering their gameplay to fit around in-app purchases (i.e., the same ones oftentimes found in free-to-play mobile games) was NBA 2K14 and Forza Motorsport 5. Both games opted to alter elements in the way players engaged the titles to grind out their experiences with smaller payouts and greater incentives to head to the cash shop.

From Reddit, to N4G, to Gamefaqs to NeoGaf, gamers were originally infuriated that media completely skipped over the cash-shop-beckoning grind that permeated through every aspect of 2K Sports’ NBA 2K14 and Turn 10’s Forza 5, with the exception of Giant Bomb. Subsequently, gamers’ rage went even further after they found out about NBA’s always-on DRM mechanism, which a lot of gamers felt was under-reported by gaming media. The community was also terribly peeved at how many sites didn’t warn them about the prevalence of microtransactions present in Forza Motorsport 5, as well as how much some of the cars costs. When the same issue arose for Gran Turismo 6, gamers took reviewers to task to ensure that they brought up and mentioned just how pervasive the cash shop presence was in the game.