So many great games came out in 2013 making it one of the most memorable years for me ever. Unfortunately, I didn’t get a chance to play everything, but one of my resolutions for 2014 is to play all the great games I missed in 2013. For instance, critically acclaimed games like Terraway, Assassins Creed IV Black Flag, Saint’s Row 4, the Stanley Parable, and many more didn’t make my top 10 simply because I didn’t have time to play them. Every title included here is something I finished and had substantial time to think critically about. Without further ado here are my top 10 best games I played in 2013.

10. Luigi’s Mansion: Dark Moon. One of the greatest handheld experiences I’ve ever had and the best game from Nintendo to come from the year of Luigi. Capturing ghosts is a heck of a lot of fun and I liked how different all the mansions felt over this surprisingly long game. The 3D is used very well and the boss battles were impressive. Nintendo please make a Super Mario Sunshine sequel for 3DS or Wii U next.

9. Guacamelee My sole Indie game on my list is an enjoyable Metroidvania style romp with excellent combat. I love the characters, setting and the creative power ups, like turning into a chicken, suplexing enemies, and gliding across the screen. The game is pretty challenging and the length is reasonable at about four to five hours. Here’s hoping for a sequel with possibly a new setting and voice acting.

8. DmC: Devil May Cry I played a ton of action games this year from Killer is Dead, God of War Ascension, Metal Gear Rising Revengence, and Castlevania Mirror of Fate, but the new Devil May Cry was definitely the best. I love the combat and how many options you have to eliminate all  your enemies. The story and presentation are also excellent and I genuinely cared for the supporting characters. I even liked the new Dante. While I thought the game was a bit easier compared to past DMC games, I respect Ninja Theory for branching out in a new direction in the series while keeping the gameplay faithful.

7. Rayman Legends Besides Mario no other game made me smile more than Rayman Legends. Similar to Rayman Origins, the graphics, music, and level design is all wonderful, but what I liked best about Rayman Legends is that it uses the unique features of the Wii U Game pad better than any game on the system. Titling the controller and using the stylus to control  a secondary characters adds to the gameplay and wouldn’t feel the same if  you were playing on Xbox or PS3. I’m glad to see Ubisoft is still willing to invest in their niche games alongside their triple AAA lineup.

6. Bioshock Infinite Like the Last of Us, Bioshock Infinite told a memorable story and was one of the best games I played all year. And similar to Last of Us I enjoyed the game the most when I wasn’t firing a gun and just walked around the environment or interacted with the characters. I found the gunplay enjoyable, but the skyhook thing to me didn’t add a lot to the experience and some of the bosses dragged on too long. That said, the journey was totally worth it and like Rapture, Irrational has created a universe I love exploring. Lastly, that ending still has me thinking of all the possibilities the series could go next.

5. Super Mario 3D World. When Nintendo first announced this game I remember feeling pretty bummed out that it wasn’t a new Galaxy game and instead  looked like just a carbon copy of Super Mario 3D Land.  However, as I started hearing more positive buzz on IGN and Kotaku I started to get excited again and I’m glad my general impressions were wrong.  I thought Rayman Legends would wipe the floor with the new Mario, but this game ranks among the best titles in the series and like the Galaxy games provides a sense of wonder with each new level. I’m also amazed at how much content is included and I have every intention of collecting all 380 stars and to experience everything.

4. The Last of Us Naughty Dog’s latest masterpiece is the most gripping and emotional experience I had with a game all year. Although it didn’t make the top of my list I still had a great time with it and scenes like the hospital, the giraffe, and when Ellie picks up the bow for the first time will stay with me forever. The presentation, music, and voice acting all set a new benchmark for video games and I can’t wait to see what Naughty Dog does next with Uncharted 4. I also like how nearly each kill felt justified for Joel and Eliie’s survival unlike Uncharted where I feel like a mass murder. Finally, in terms of A.I companions, Ellie  proved to be an even better partner then Elizabeth in Bioshock Infinite and watching her silently take down enemies on her own really impressed me.

3. Tomb Raider Last of Us had the better story, but to me Tomb Raider had stronger gameplay and I had more fun playing it. Having just finished Tomb Raider Underworld, I didn’t know how I’d respond to the new direction Crystal Dynamics took. However, within hours I was hooked. I love  how the bow and the pick axe make Tomb Raider feel refreshing again. The gunplay which has always been pretty terrible is the best the series has ever had and the upgradable system rocks. Now that Crystal Dynamics has refined the Uncharted formula y even more here’s hoping Naughty Dog takes some ideas from Tomb Raider to improve Uncharted 4.

2. The Legend of Zelda: A Link Between Worlds The sequel to my favorite game of all time turned out even better than I expected. Being back in the Hyrule I first experienced as a child practically brought tears of joy to my eyes along with the memorable soundtrack, and the classic 2D gameplay. I’m glad Nintendo took a risk with all the changes to the Zelda formula like the rental system, being able to tackle the dungeons in any order and the wall painting move while still perfectly capturing the magical gameplay from a Link to the Past. Which in my opinion is still the greatest Zelda game ever made. 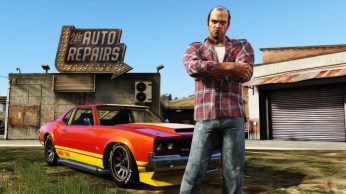 1. Grand Theft  Auto V. It’s been a long wait since GTA IV, but GTA V was totally worth the wait. Last of Us, Mario, Zelda, and Tomb Raider were all memorable experiences, but I had the most fun playing GTA V. The sheer value of game here is insane along with the best play mechanics and open world design Rockstar has ever done. I love switching between the three characters, the classic satirical humor Rockstar is known for, and that beyond the lengthy storyline there’s dozen ways to make your own fun. GTA V without a doubt is my game of the year.