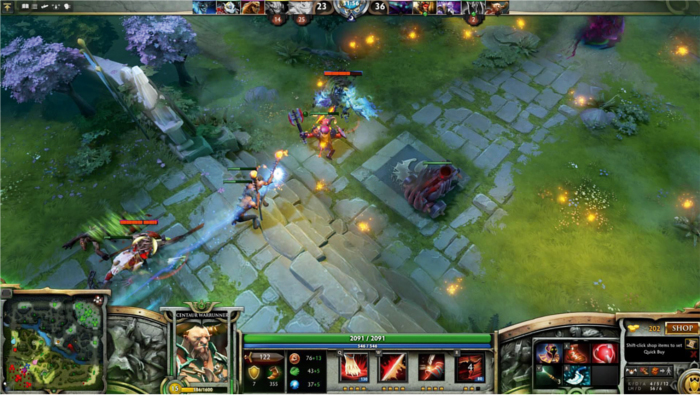 Who doesn’t like free? Are you one of those people who think free-to-play games are never as good as the rest of them? Five years ago I would have agreed with you, but the gaming industry has changed, and each time more and more free-to-play games come out that have nothing to envy from paying experiences.

Defense of the Ancients is the very first true Multiplayer Online Battle Arena game, it is a Warcraft III mod based on the “Aeon of Strife” map for Starcraft. It immediately grew on popularity surpassing Warcraft’s multiplayer itself. As you can imagine it didn’t take long before video game companies started developing MOBAS of their own. DotA 2 is Valve’s attempt, unlike the others it’s a sequel to the original mod, and gameplay remains pretty much unchanged.

If you are new to this genre, prepare for a rough ride, I’ve found that the best way to start is with someone coaching you through your first matches and maybe do some research beforehand. The main problem is that DotA 2 gives you a whole lot of information in very little time, and a community who will give you a hard time if you don’t know what you are doing. The more advanced mechanics are hidden from players which forces you to go online and investigate if you want to get better. But with a little patience DotA 2 becomes one the best team mutiplayer experiences you can have.

The game utilizes Valve’s source engine, and looks great, if a little bit cartoony, it’s not a demanding game in terms of hardware, and with a little bit of messing with the settings it can be played on most PCs out there.

There is a reason I decided to start this series with DotA 2. It’s because, unlike many others, it is a true free to play game, setting an example for all the others out there. The only things for sale are cosmetic items, to customize the different heroes the game offers, and tournament tickets, which allow you to spectate pro matches from the game itself. No amount of money can give you an advantage over other players, and that is what makes DotA 2 stand out from it’s competition: You are not limited in any way, and as soon as you finish the tutorial section over 100 heroes are available to pick.

Each one of them and their abilities are different from each other. This adds depth to the game starting on the picking phase. Valve has done a great job improving the original experience, and the game has a regular matchmaking system as well as a ranked one that has public MMR and requires a certain amount of matches to be played in order to be unlocked. This is to protect newcomers from the very competitive players found on ranked games.

At around 7GB, the game doesn’t take a long time to download and I recommend you to try it out. It has a bright future and one of the biggest gaming communities out there. Yes it will be hard, you’ll have no idea what to do, and people will rage at you. My best advice if this happens is mute everyone that starts getting a little bit too competitive and keep playing, learn from your mistakes, and you’ll get better in no time. The experience is too rewarding to pass up.