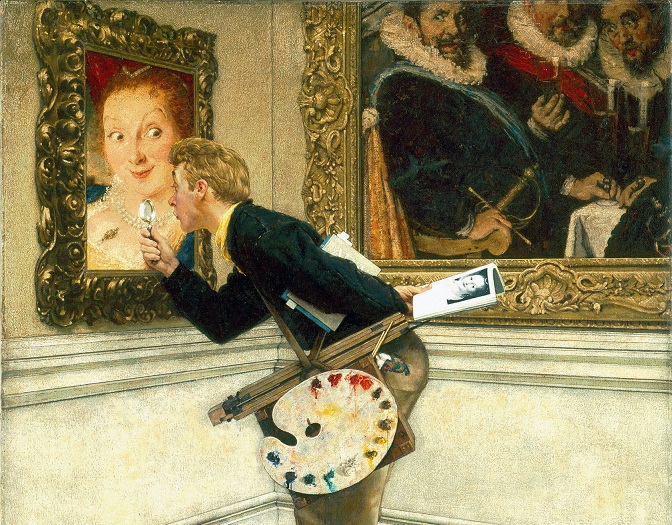 We’re all just a bit self-centered. It’s difficult to consider other perspectives because our own perception is the easiest to rely on. With that, intuition or “gut instinct” becomes the typical compass that guides us through the rocky shoals of reality.

And so it’s uncommon to see professionals (who have little to no education in art theory) criticize games beyond a subjective manner. They place themselves at the forefront of artistic critique, and the overall analysis becomes more about them and their own sensibilities than the work itself.

Of course this isn’t always a bad thing — artist’s do like to know how they’re connecting to their audience — though its value toward the creative process is notably less than if the work and its own merits are the sole focus of examination. This goes double for whenever something controversial or “problematic” is being discussed.

As smell isn’t always a clear indication of either rot or vitality, impulse alone is a poor means of judging quality.

Objective: Japan has gone through a cultural shift toward fantasy substitutions for relationships and sex. Hence the population decline.

Subjectivity: All about you

For many writers, it’s difficult to accept that the world has little reason to care about individual sentiment. It’s often all one has when expressing a case for or against something, simply due to it being the easiest method of expression. Putting our own feelings to paper is significantly less daunting than disconnecting from ourselves in favor of outside sources.

Likewise, subjective opinion alone is then asserted as a valuable asset to examination. When it is nearly all a career critic ever bothers to utilize, of course it’s viewed as significant. This is why many journalists will not shirk from providing their personal views on any subject, despite a lack of information.

Subsequently, the usual problems present themselves — often having less to do with the initial subject as the discussion progresses.

It shouldn’t take an experienced artist to understand why criticism based solely on an individual’s sensibilities is typically useless. Seldom is any one person a key consideration during the creative process, and so any argument based on such becomes insignificant in a world (and potential audience) of billions.

In art academia, a common practice is for peers (fellow students) to analyze and review each other’s work. Often, this inquiry is based on the current lessons and principles of that particular assignment. If a student provides feedback along the lines of “This makes me feel uncomfortable” or “I personally don’t see the appeal of this,” such an assessment is often brushed aside. It says practically nothing about the work intrinsically.

Disregard for the piece’s own integrity grows when an open disagreement is made. When personal aspects become the engine for a critique, any form of dissenting opinion is typically seen as a personal affront. Therefore, irrational reactions and thoughts are justified because they are viewed as a form of self-defense. Words like “attack” and “harassment” are tossed into the mix. At that point, the discussion shifts, and the game of subject becomes a distant thought.

As harsh as this may sound, an artist has every reason not to care about any of this. It doesn’t particularly concern them or their work as a whole.

Objective: Pyramid Head is a manifestation of James’s guilt, often seen doing brutal acts that James is linked to in some way.

Objectivity: All about it

Frequently, people confuse objective criticism with a literal regard for tactile and technical qualities. Many view artistic expression as something purely emotional — derived straight from the convictions and even spirituality of the creator. This couldn’t be farther from the truth, as it’s more common for artists to depict subjects beyond their personal aspects (otherwise they face a very short-lived career). With that, the common occurrence of scolding artists for their work as if it were an expression of their own beliefs is a logical fallacy beyond measure.

The greatest privilege of being an artist is that one is often required to broaden their perception of the world around them. For this, every subject must be approached with a clean slate of sorts, free of predilection and predisposition. Every little detail is considered thoroughly with regards to the greater picture — character traits, visual style, setting details, and so on.

The bookends justify the means

Merely attempting to see things from an artist’s perspective isn’t enough, so I decided ask a well-respected designer for his views on the topic. Few have managed the retain the same degree of integrity as Obsidian Entertainment’s Chris Avellone (Fallout 2, Fallout: New Vegas, Planescape: Torment, Star Wars: Knights of the Old Republic II: The Sith Lords), not to mention such a fantastic and admirable portfolio.

When asked which he views as more valuable, objective or subjective criticism, he answered: “With us, it’s largely objective. We can objectively look at a piece of art that is designed to fit within the Star Wars universe or South Park universe and make very objective critiques on its appropriateness because of the bookends those franchises already provide us. Even with Pillars of Eternity, we take care to lay out those bookends early on as well in terms of camera angle, type of gameplay, nostalgic Baldur’s Gate-feel, etc. In essence, we make the bookends ourselves.”

That’s artistic integrity in a nutshell. Essentially, every facet of a game’s creation is a carefully reasoned ingredient to the overall dish — including anything that your stomach may not agree with. The Fallout series, as cheeky as it can be at times, deals with some fairly heavy themes. Players were even given the freedom to kill children in Fallout 2. As deplorable as that can seem to us individually, it fits perfectly within the game’s context. Why? Because it’s the post-apocalypse, and the player character is just as capable of atrocities as the fiendish Khans. Yes…in art, it’s sometimes that simple.

Avellone concluded with: “I often find it gives more strength to the artist if you see what they’ve done with their passion and interest, provided the gameplay criteria and the franchise remain intact.”

Objective: Trevor is a sociopath who finds delight in distinguishing himself from others any way he can, especially by dominating them.

Despite what many writers may believe, a thick wall exists between the world of game development and the world of journalism. Though many of its bricks were laid on account of the media’s penchant for tossing developers under the bus, its existence is predominantly due to a blatant ignorance and misunderstanding of the artistic theories and philosophies behind the many elements of game production.

In the process of evaluation, as critics wholly embrace subjectivity, they separate themselves from potentially conflicting viewpoints, particularly those of the developer. In a sense, critics then create an entirely new game — one that conveys their preconceived impression. From that point, their criticism typically becomes less about evaluation and more about accusation. A seed of doubt is then planted, and developers find themselves backed into a corner of sorts, responsible for the exact opposite of their original intentions.

Such actions have resulted in shattered trust and a great divide. The majority of interactions between journalists and developers are now scheduled, regulated, and overseen by public relations — like some prison guard during visiting hours. Journalism is now a mere tool of marketing for the sake of a game’s publicity, often at the mere expense of a few alcoholic beverages. And now professional game criticism is but a punchline among designers, artists, and programmers who have an infinitely greater knowledge and understanding of the medium.

Yes, it’s quite difficult to remain objective. Nonetheless, that’s absolutely no excuse to avoid or dismiss it, especially if one’s job is to examine and evaluate a craft that reaches a general audience of millions. Further, arguing against objectivity is a rather silly endeavor, especially if it’s to merely excuse one’s lack thereof.

Respectfully, criticism should be difficult. It should be an elusive and confusing process, one that few can manage to do effectively and beneficially. Much like what we’re used to in our games, analysis needs to be ripe with its own puzzles and obstacles. At the moment, that’s sadly not the case. Anyone can be a video game critic/journalist. Anyone can easily say what’s on their mind.