Bethesda has done a commendable job with the Fallout franchise so far, but there is always room for improvement. Quite a bit of time has passed since the release of Fallout 3, and this franchise will need quite a bit of fine-tuning to keep up with its present-day peers. So, here is a list of suggestions Bethesda should take into account when crafting their inevitable sequel.

It is impossible to ignore the success of shooters like Call of Duty and Battlefield, and that triumph comes mainly from their ultra-personal and tactile shooting mechanics. Even more RPG-centric titles like Borderlands and Far Cry 3 borrow from the military FPS formula. It needs sprinting, down-sight aiming, and environments more carefully designed to provide cover. Also, stealing the real-time injectable syringes from Far Cry 3 would add a layer of immersion while simultaneously keeping players out of stale menus.

It is very difficult to get attached to Bethesda characters because they rarely ever emote. Every model feels like a slightly altered male or female template. The main antagonist is about as kinetically diverse as the first shopkeeper you encounter. They should use their eyes and have an actual skeletal structure in their faces that allows for a variety of expressions. Also, there should be more direct interactions like embracing others and grasping things.

Fallout: New Vegas introduced a setting known as “Hardcore” mode. Players had to watch out for starvation, dehydration, and sleep deprivation. Truth be told, it wasn’t very central to the experience and served more as an annoyance. Though in Fallout 4, the concept could be expanded upon. It would add a needed level of challenge to the game: being forced to scavenge for clean food and water. Certainly it would be a lot more challenging than simply trying to find the nearest bed to sleep in for an hour. It would also be neat if Stimpaks only provided temporary relief from injuries while meals and rest genuinely restore health.

4.  Beef up the soundtrack with more classics

In both Fallout 3 and New Vegas, radio stations cycle through their entire catalog of material far too quickly. It is time Bethesda reached deeper into its pockets and acquired a more diverse catalog of music. I would like to think more than just Cole Porter and the Ink Spots survived the nuclear winter. Where are Elvis, Louis Armstrong, Johnny Cash, Sinatra, Ella Fitzgerald, and Chuck Berry? Heck, it would even be a pleasant surprise to have a classical music station. Killing a swarm of bloatflys to Flight of the Bumblebee would be exhilarating. 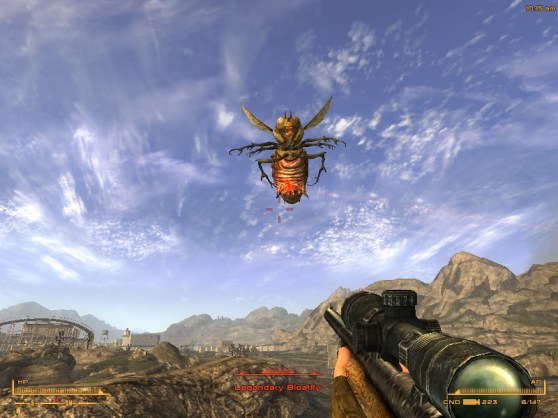 In Fallout 3, the first dungeon you are prompted to visit is an elementary school occupied by bandits. It has green tile trim on the walls, gray tiles on the floor, and a nondescript cement ceiling. These same assets are copy-pasted to countless interiors throughout the game, including the Capitol Building, whose majestic exterior gives every indication that it will be different on the inside. With next-gen power, this is inexcusable. Even if it means scaling back the sheer size and scope of most structures, it would be more beneficial to the overall experience if designers spent more time hand-crafting every interior instead of desperately recycling textures and furniture. Taking a step back from monochromatic color palette would also benefit players trying to navigate buildings that otherwise seem like multi-story hedge mazes.

6.  Add some form of transport

Instead of trekking everywhere or subverting immersion by fast traveling, give us a vehicle or animal to ride. A horse, a radiation engorged Komodo dragon, or even a literal pack mule. Alternatively, push the Mad Max vibe with a jury-rigged dune buggy. Just because it’s the post-apocalypse doesn’t mean all wildlife is hostile or every vehicle is inoperable. Plus, rapidly moving or animals (either friend or foe) would provide a great contrast to the normally static atmosphere of Fallout.

Irradiated animals, hulking super mutants, and puss-spewing abominations stalk the wastes of Fallout games. These horrid freaks of nature are simultaneously repulsive and fascinating. Bethesda needs to crank up the realistic detail on these monstrosities, making them something closer to a disgusting close-up shot from Ren and Stimpy. Mutants need scars, boils, and blood-stained skin.  Bugs should have working pincers and antenna that wiggle to unnerve you. Deathclaws should snarl, drool, and follow you with their disturbing albino pupils. The exhilaration of fear would make combat more personal and keep encounters from turning into trivial XP grinds too quickly. 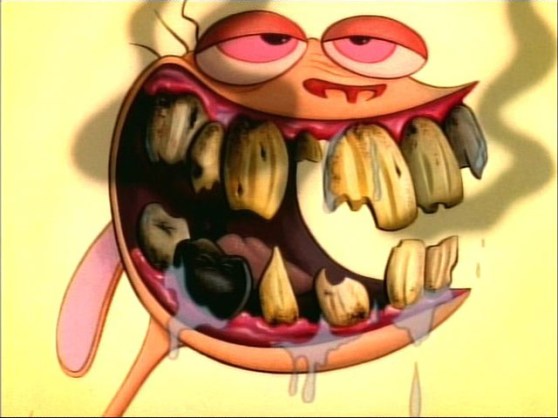 Above: Monsters in Fallout 4 should be this gross.

Fallout: New Vegas included weapon customization that made the vast majority of weapons more entertaining to use. An ordinary baseball bat is boring compared to one permeated with rusty nails or a 12-Guage with incendiary rounds versus plain bullets. Heck, it would even be nice if you could paint the guns different colors by finding spray paint in abandoned hardware stores. Certainly players would be far more attached to their bright orange M16 with grenade launcher attachment and extended clips than whatever generic machine-gun they loot from bandits

Nearly every day on Reddit, somebody posts an image of their stash of cheese they’ve hoarded in Skyrim or their painstakingly decorated shack in Fallout 3. The patience required to place these objects so deliberately with the decidedly wonky grasping systems is beyond incredible. At this point, Bethesda should know a lot of gamers like to treat their virtual homes like an extension of Animal Crossing. So, make the grabbing easier and more precise. Learn from what Valve did with lifting and stacking in Half-Life 2, evolve it by allow players to rotate things. Putting a cigarette in an ashtray shouldn’t cause more tension than attempting to line-up a shot with a sniper rifle.

Any punk can pull a trigger, but not everyone can karate chop bad guys in the jugular. Unarmed builds would be more viable and fun if they had a larger array of options. In the slowed-down combat of the V.A.T.S. system, unarmed experts should be able to snap bones and disarm foes. The general array of combat moves should extend into martial-arts styles and perhaps even include kicks. Being able to prowl around in the dark like a ninja and snap enemies necks would undoubtedly be a highlight of the franchise.