Well known for its work on the PlayStation Network with hits like Super Stardust HD, Dead Nation, and the recently released shoot-em-up Resogun, there’s no denying that Housemarque is a household name among PlayStation fans. With as many top-notch games as it’s put out, have you ever stopped to think how well you really know the developer?

I recently had the pleasure to chat with two members of the development studio, Tommaso De Benetti and Mikael Haveri, who gave me some insight into who they are, what it’s like to work on some of these great titles, and also a hint at what’s to come. It was great to get a peak inside the oldest game company currently in Finland and also what it’s like to develop one of the best PlayStation 4 titles currently available right now.

I’d like to take a minute to thank both of them for taking the time out of their busy day to talk to me. I really appreciate it guys and I wish you all continued success moving forward.

Gamer Crash: For those who may not be familiar with your studio, if you wouldn’t mind, please give us a rundown. Who is Housemarque, and how were you founded?

Housemarque: Housemarque is the oldest Finnish game company. We were founded in 1995 by Ilari Kuittinen and Harri Tikkanen. The guys previously owned two companies called Terramarque and Bloodhouse, so … well, you can guess how the name Housemarque came up.

We went through different developing cycles, and in our catalog you can find even point-and-click adventures and sports games. We’ve been developing for a lot of platforms, including a few weird ones like Nokia N-Gage or the Gizmondo. Housemarque reached popularity on Amiga at first and then again with the release of Super Stardust HD for PlayStation 3. That was the beginning of our current cycle. After that, we published other hit games such as Dead Nation, Outland, Super Stardust Delta, and of course Resogun.

GC: What games have inspired you and your team growing up?

HM: We have more than 50 employees, so the answer is gonna be really different according to whom you ask, but in general I think we all share an interest and respect for old arcade games where gameplay is central. I think it shows in the games we make now. We try to keep that immediacy alive today, making sure key aspects of the experience — like super responsive controls — are nailed down to perfection. If you want a more personal answer, at the penny arcades, I was really into Bionic Commando, Strider, Ninja Spirit, and pretty much anything else with ninjas in it.

GC: How did working on successful PlayStation 3 titles like Super Stardust HD and Dead Nation help prepare the studio for the PS4 and Resogun?

HM: They helped us establish a close cooperation with Sony. The fact that Resogun has been available at launch to PS Plus subscribers is a direct consequence of that. As for developing the game itself, I think it’s been more of a natural direction for us to follow. We learned some things from our past games, and we are trying to keep them in mind when we are working on something new.

GC: For those unfamiliar with Resogun, can you provide an overview of the game?

HM: Resogun is a twin-stick shooter on a cylinder. The peculiar shape of the level allows for some interesting mechanics, like micromanaging things on all sides [and] trying to not get killed while at it. The player needs to save humans, prevent them from being abducted, defend himself from enemy waves, keep the multiplier up, manage correctly weapons and power-ups … . There’s a lot going on. The game is built out of voxels, and the environment is entirely destructible. 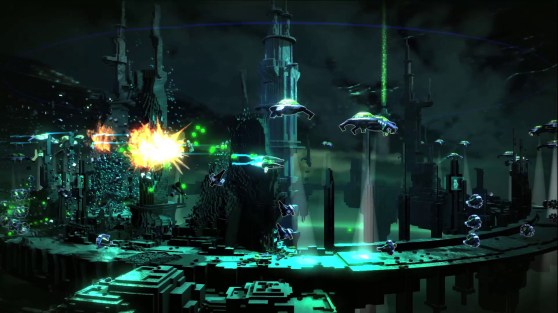 GC: What was it like developing a launch game for a brand new console, especially compared to working on the PlayStation 3 prior?

HM: Our tech team was very happy working with PS4. Despite having just the basic documentation, they didn’t have to get mad trying to reverse engineer the hardware. PS4 is a very powerful, very straightforward machine. We’ll be able to squeeze more out of it in the long run, but for now, we’re happy with the performances we achieved.

GC: Was creating a launch title for the PlayStation 4 always the plan, or were you approached by Sony with this opportunity?

HM: Resogun started as a platform-agnostic concept. When it came down to deciding the platform, we realized our vision would reach full expression only on PS4. It was cool making a game without the pressure of taking away features to make it run as intended.

GC: Resogun is a hit with both critics and consumers alike, which must make you all pretty happy. How tense was the studio on launch day to see the reactions from players and fans?

HM: To be honest, we were confident people would like it. We had a very good feel of their reaction when the game was announced and playable at Gamescom, and even internally we couldn’t get some people to stop playing. So we weren’t afraid it was going to suck. Of course, seeing Resogun mentioned from several sides as the best launch game for PS4 … well, that we didn’t expect, actually. And people were opening wine bottles when they learned they could get it for free.

GC: Did Sony approach you guys about putting Resogun on PlayStation Plus?

HM: Yes. Sony founded the project, and being on Plus has always been an option. But the decision was taken quite late in the cycle. In retrospect, I think it was a good one because the genre of the game might have discouraged some people from trying it had they to pay.

GC: Looking back now, is there anything about the game where you just think, “Man, if we only had a bit more time”?

HM: Yeah, definitely. Every game could use more time, but you have to let them go at some point. We are going to add things we wanted to include in the main game during the game’s lifespan. We hope Resogun will still be played four or five years down the line. For launch, we really did the best we could given the tight deadline. More will come, it’s a promise.

GC: For fans of the game and your studio, what can they expect to see in the future?

HM: Well, we have this other PS4 project in development that people seem curious about and an iOS game scheduled for this year. We can’t share other details at the moment, but it’s gonna be an exciting year for us.

GC: Anything else you’d like fans and gamers to know?

HM: Yes: Do not ignore smaller productions just because you don’t get to see ads at the movie theater [for them]. You might find out you like them better than much more expensive products.

Thank you to De Benetti and Haveri! PlayStation 4 owners can grab a copy of Resogun for free via PlayStation Plus right now. What are you waiting for? Go download it!