Shadowrun is a role-playing franchise that many gamers hold near and dear to their hearts. Last year, Shadowrun Returns marked a comeback for the dormant series and released to stellar reviews thanks to developer Harebrained Schemes, a studio made up of industry veterans such as Jordan Weisman, Joe DiNunzio, and Mitch Gitelman.

Recently, I was able to speak with Harebrained Schemes’ co-founder Mitch Gitelman to talk all things Shadowrun and the daunting task of bringing this classic series back into the spotlight for a new generation. If you’ve ever wondered what it’s like behind the scenes over at Harebrained Schemes or who these guys are, this is an interview you can’t afford to miss.

Big thanks to Mitch for taking the time to speak with me and to Robin for setting this all up.

I’d also like to take this opportunity to tell each and every one of you to go grab a copy of the Shadowrun: Dragonfall expansion when it releases on Windows, Mac, and Linux today (Feb. 27) for $15. So make sure to run, not walk, to the nearest computer and grab it.

Derek Nichols: Mitch, if you wouldn’t mind for the people out there that may not be familiar with you guys, could you give a rundown on what Harebrained Schemes is and also some of the studio’s origins?

Mitch Gitelman: Sure. It’s funny – I just went to our website to see how we describe ourselves, and I found this little gem: “Harebrained Schemes is a small team of passionate game developers led by Jordan Weisman, the creator of Shadowrun, Crimson Skies, BattleTech, MechWarrior, and many other acclaimed properties. Founded in 2011, the Seattle-based studio is centered around collaboration between seasoned veterans and fresh talent.”

That really does sum it up for me. Harebrained Schemes is all about passionate people working closely together to create games that our audience can be passionate about, too.

As for the studio’s origins – there’s sort of a matchmaker element to it. I had just left Microsoft Games and was consulting for Bungie. They were interested in mobile gaming and were talking to my old friend Jordan about a game concept he had for a steampunk pirate game. He already had a good core team of about five artists and engineers, but he needed a producer.

Bungie wanted to publish it, so they suggested that the two of us chat to see if there was a match. Jordan and I had been talking about working together again for years — we collaborated on MechCommander and Crimson Skies at FASA — so it was really a no-brainer. We got together on a Friday, and Jordan showed me his three-slide PowerPoint concept deck for the game. We started work on Monday.

Twelve weeks later, we shipped our first title, Crimson: Steam Pirates. It ended up being one of Apple’s Benchmark Games of 2011 and one of Metacritic’s “Best iPhone Games of 2011.”

We had a ton of fun making Crimson: Steam Pirates with the team, so we solidified our partnership, and Harebrained Schemes was born. Our next title was called Strikefleet Omega, and we were lucky enough have it named one of Google Play’s “Best Games of 2012.”

The team worked their asses off on both of those games. Then in 2012, we launched the Kickstarter campaign for Shadowrun Returns and found out what real work looked like. Later this year, we’ll ship our other Kickstarter project, a digitally enhanced miniatures board game called Golem Arcana. 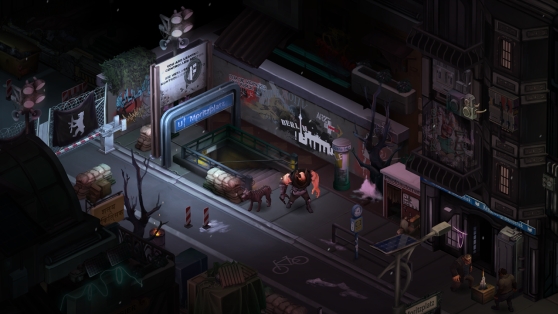 Nichols: The thing that I’m really curious about is just how you guys thought to return to the world of Shadowrun. Was it something that has always been in the works from the beginning, or was it one of those crazy ideas that someone comes up with as you’re all sitting around a table one night?

Gitelman: That started in one of our 3 a.m. email conversations. I pitched the idea of doing a Kickstarter in late 2011, but Tim Schafer hadn’t had his enormous success yet, and we felt like the platform was still unproven. So we decided to shelf the idea.

Right around the same time that Tim hit $3 million – around March 2012 — the publisher we were working with asked when we were going to make Shadowrun. Then, the next day, Kotaku ran an article about the games they’d like to see come back, and Shadowrun was near the top of the list. The stars had aligned.

Nichols: So obviously, you guys went the crowdfunding route with Kickstarter, which ultimately proved to be extremely successful for the studio. What was that like for the team, seeing just how much support you had from the public?

Gitelman: It was kind of magical – the scary, Sorcerer’s Apprentice kind of magical. And by that, I mean the Mickey Mouse version, not the Bruckheimer version. The outpouring of positive emotion for Shadowrun was incredible. It’s a part of peoples’ childhoods. They sent us bagels and pizzas during crunch. They sent us encouraging emails. When we met them at conventions, they were warm and supportive.

And their expectations were high. Very high. And we had only about $1.1 million in operating funds to deliver with. It was incredible working hard on something that you knew people really wanted, but the sense of responsibility to live up to their expectations and not disappoint them was very, very stressful. For me, it was all worth it.

Nichols: I missed the boat on the Kickstarter. By the time I was tipped off, it had ended. What really caught my attention though was the alpha gameplay video you released. I had just finished playing through XCOM: Enemy Unknown, so seeing this futuristic world combined with turn based RPG gameplay, I was hooked.

With that said, how difficult was it toeing the line between keeping the core values of Shadowrun and trying to modernize it for today’s market?

Gitelman: From a gameplay and mechanics point of view, we didn’t really attempt to “modernize it.” It was more like “translate it” into a fun experience for a very different medium. In a lot of ways, Shadowrun Returns is a throwback to old school RPGs – both Shadowrun and other classic computer RPGs. It’s a thoughtful, tactical, character-driven type of game, and I think our design team did a good job of delivering on that. At the end of the day, for us it’s not really about “core values” versus “modernization” at all – it’s about simply finding the fun and providing a uniquely Shadowrun experience.

The real challenge came from delivering the tone and feel of Shadowrun to a modern audience. Shadowrun was created in 1989, so its vision of the future is different than the future that has already developed. We didn’t want to travel too far down the “retro-future” path because we didn’t want the setting to feel gimmicky or self-aware. So our artists and writers had a big challenge — to channel the ’90s sensibilities without kitchy elements that might distract you from what’s cool about the setting. Judging by the reaction of the fans and people new to the game world, it looks like we managed to walk that tightrope.

Nichols: Looking back, is there anything about Shadowrun Returns that makes you just say, “Man, if we only had a little more time …”?

Gitelman: I’ve never made a game where I didn’t feel that way, but that was the real joy in making Dragonfall. Building on a successful platform is a wonderful thing. You can listen to your audience and react to their feedback in a measured and thoughtful way. You can listen to your team and give them the space to explore the ideas they had to “hold on to for later.” You can move your craft forward. We saw Dragonfall as our opportunity to improve in every area of the game – tactical gameplay, storytelling, art, tools … everything.