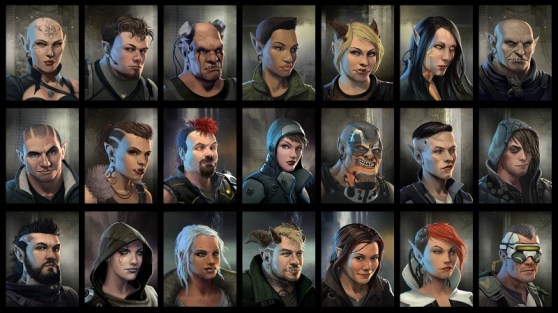 Nichols: For you personally, what’s your favorite aspect to Returns? What are you most proud of?

Gitelman: Hands down, I’m proudest of the team. Although we started with a blank slate and the studio tripled in size during development, we were still able to maintain our cohesion and our culture and have fun under wildly stressful “go, go, go” circumstances. I’ve been doing this a long time, and you don’t forget an experience like that.

As far as the game itself, I’m personally most proud that I could heavily contribute to delivering the Shadowrun tone. As the executive producer of the 2007 first-person shooter, I was highly motivated to get that right.

Nichols: At some point in the future, is there any possibility of bringing Shadowrun to other platforms such as consoles? Is that something you’d like to see at some point down the road?

Gitelman: We’re not ruling that out. We’ll go where the audience is. But we’re a small team with a lot on our plates, so we have to be very careful about the work we prioritize. And we know better than to underestimate the work it would take to ensure a quality experience on console.

Nichols: [Today] Shadowrun: Dragonfall goes live. Can you provide an overview of the game, how it fits in with Returns, and also some of the new features players can expect to see?

Gitelman: Definitely. I’m really excited about Dragonfall because it reflects our growth and learning. We worked hard on the Shadowrun Returns Dead Man’s campaign, and we’re proud of it, but we see it as just the beginning of what’s possible.

The editor and game system that Jordan designed and people are using to create their own content is incredibly powerful, but we really only scratched the surface of what it could do in the original. In Dragonfall, we’ve added to and really exercised what it can do.

To start, Dragonfall gives players a lot more agency. We’ve heavily increased opportunities for you to make interesting and challenging choices throughout the 12-plus hour campaign. There are multiple ways to approach and achieve your missions, and you’ll have an assortment of shadowruns to choose from while uncovering the main storyline. 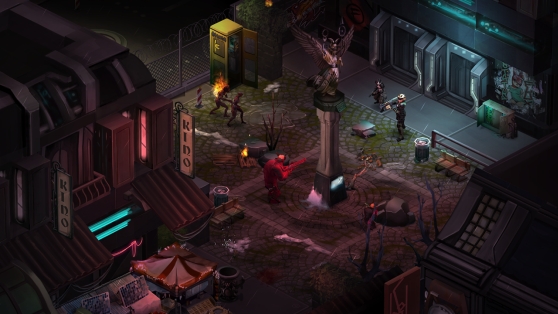 In Dead Man’s Switch, you had a dive bar as your home base. In Dragonfall, we’ve expanded that to an entire neighborhood of characters for you to get to know and tap for supplies and equipment. And you won’t be on your adventure alone, either. In Dragonfall, you’ll lead a persistent team of shadowrunners, learning their capabilities while getting to know and trust them. You can then select which ones to take on the missions you choose to accept.

Like any good expansion, we’ve added a bunch of stuff – a new city to adventure in; a new cast of characters; new weapons, spells, and equipment; and the ability to save anywhere in the game.

We got a lot of great feedback on the writing and storytelling in Shadowrun Returns, and we’ve worked very hard to create a compelling plot that’s fun to interact with. It’s been really fun to set our second story in the “Flux State” of 2054 Berlin and its experiment in “stable anarchy.” There’s so much great stuff to mine in the Shadowrun universe! You can find a bunch of screenshots and the trailer here.

Nichols: Will we be seeing any crossovers or callbacks to Returns?

Gitelman: Could be. You’ll have to see for yourself. But Dragonfall overall is its own standalone narrative experience.

Nichols: After Dragonfall releases, what’s next for Harebrained Schemes?

Gitelman: As I said earlier, there are piles of great ideas to mine in the Shadowrun universe. The cyberpunk-meets-fantasy setting is ripe for all sorts fun stories, and we’d love to have the chance to tell more of them.

Beyond Shadowrun, we’re hard at work on Golem Arcana, our digitally enhanced board game. It combines prepainted plastic miniatures like Hero Clix with your phone or tablet to deliver a tabletop game that’s easy to learn and fast to play.

Golem Arcana connects the miniatures and game board to your touch-screen device using a Bluetooth-enabled stylus we created. The stylus, combined with your phone or tablet, makes record-keeping automatic and [puts] important game information at your fingertips. And the world of Golem Arcana is pretty cool, too. Here’s a link so you can read more about it.

Nichols: Anything else you’d like to mention to fans out there?

Gitelman: Yeah, you should definitely check out some of the cool Shadowrun stories people are making with the editor. Jordan and I have made some Let’s Play videos of our favorites and started a new idea called “Shadowlabs,” too. That’s where we play community-created content and give feedback to the designer. We’ve gotten a lot of positive feedback on those. You can check them out, along with a bunch of tutorials for the Shadowrun editor on the Harebrained Schemes YouTube Channel.