In late March, this infographic was upvoted to the front page of social networking site Reddit, receiving over 470,000 views and counting. Valve provided the statistics in February 2014 while the research and compilation was done by Gillian De Noojer in association with GamerNL (you’ll have to translate the page from Dutch to English). The interactive and easier-to-digest version can be found here.

Collectively, this project depicts the viability of Steam as a marketplace and the fundamental factors influencing backlogs — or a list of unplayed games in a user’s library — along with some other interesting tidbits.

The main, overarching statistics for an average gamer who buys or activates a game on Steam are as follows:

This elicits the natural question, “Why would anyone buy a game and not play it?” It seems just a bit absurd.

But this is where Steam’s marketing magic comes into play. The Steam sale is always a viral event to some degree. That 22.2 percent is caused by many gamers who are seduced by deals, where games are bundled together in one package. So there will be many situations where only two out of three games in a bundle appeal to you, but you still get the third because it’s bundled. That accounts for part of the backlog.

Time and expectations are what likely make up the remaining portion of backlogs. We often get (cheap) games with high expectations only to be put off by mountains of negative reviews, a volatile community, or an excessive in-game grind that makes us bounce as if we landed on a site from the early ’90s.

Some Redditors also offered insight with their own backlog confessions: 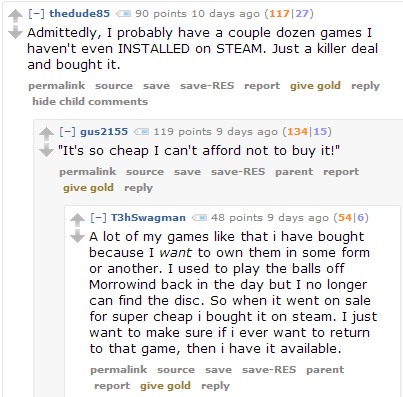 A few other backlog influencers include peer dissuasion (i.e., you buy a game, but a friend who also got it tells you it sucks and not to waste your time) and in some cases, software/hardware incompatibilities.

As a marketplace, it seems that dumping prices — the “OMG, this is so cheap I might as well get it” — just cause games to pile up like they would in store bins, except they’re cheaper now. If impulse purchases were detracted from the stats, we might see a more accurate representation of player behavior — games that people purchase that they really want to play them and not games they were suckered into. It’s almost like street-level pushing — the economics of drug dealing in the sense that the  less you pay for a product, the lower quality it’s going to be. Now if we look at the other point of view, the side of creators, this is a strange situation.

Developers’ games are getting marked down, but they’re selling. They’re creating a product with a quality of “X,” and after it’s released, X becomes the lifeblood. If X degrades, price degrades, and business degrades with it. No one wants the product because X is not high enough. It’s just sitting around in a digital store, stagnant. Along comes the Steam Marketing Train, and all of a sudden, X gets bundled in with other products that have a higher quality. This gets averaged out so that X becomes worthy of purchasing — even if it’s just for the deal of getting the other bundled games. This is marketing and sales 101. Not to mention Early Access can encourage community testers who assist in fine-tuning and constructive feedback.

It’s a win-win situation. Creators still get a cut, and gamers get more games for cheaper prices. There’s not much room to complain.

In terms of game completion, it’s pretty clear those statistics are purely subjective. No conclusions can be made other than “some games are good; other games are not.” It also depends what the genre is. Many massively multiplayer online games, first-person shooters, and real-time strategy games don’t have “completion” objectives. They’re just log-in and play types with user rankings or levels. The idea is mass retention. The campaign modes for many FPS games are only a side attraction to online multiplayer, which is an endless experience.

At any rate, the 22 percent backlog stat won’t budge as long as Steam keeps running bundle deals. Game completion — or whatever measure of “quality” you want to use — will always be a subjective representation.