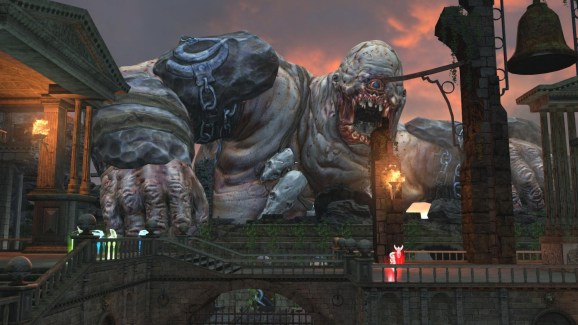 Long ago, we gamers gathered in force. We carefully loaded our 10-pound towers and 15-pound monitors into a car, secured them with seat belts, and ventured out into the world. We met in poorly ventilated basements, living rooms, and converted Internet cafes. Blue, yellow, and tan cables sprang from our beloved machines and met in one hot, temperamental box that seemed to scream out in agony at random intervals. We talked with each other in real life, drank Mountain Dew, and played team-oriented video games. We had LAN parties.

Those days are gone now, but the spirit of the LAN age lives on in Saber Interactive and Old School Games’ arcade-style multiplayer title God Mode.

I would never have known of its existence if not for a friend suggesting it to me during the 2013 Steam summer sale: “Dude — it’s a $5 shooting game. Let’s play.” I suspect most of its players were roped in this way, but it doesn’t really matter how you came across God Mode. Once you found it, you stayed for the fun.

God Mode is a third-person shooter that pits up to four players against the endless minions of hell. There is no real storyline or background other than you are a recently departed soul who is somehow descended from a Greek god, and you must navigate different levels of the afterlife to escape damnation.

The name God Mode refers to two separate parts of the game. The first is that you are dealing with Hades, who is narrator and designer of all of the hardships your team will face. Players may ask themselves why Hades, the Greek god of the underworld, sounds like some sort of effeminate British version of Oogie Boogie from The Nightmare Before Christmas (see video). Well, I can’t answer that, but it works. Hades’ quips are pretty funny and keep the flow of the game going.

The second and much more important reason for the game’s name is the various “god modes” encountered throughout. In order to start the next wave of monsters and demons on a particular level, the players must touch a statue that will assign a random god mode to the game. This could be as pointless as giving every minion a hat or as life-altering as giving every minion (there are hundreds of them in each wave) the power to kill a player with one hit. The god modes could also give the player unlimited ammo or health regeneration, which obviously enables a team to mow down the wave in a timely fashion and move on. There are tons of god modes, and they are completely random. This creates a unique gameplay experience from run to run. You might replay the same map on the same difficulty with the same team and still have a drastically different experience.

Beyond the god modes, the game is pretty straightforward. Players can unlock and customize various Western-themed guns. This was pretty informative for me because I had no idea that demons, spirits, skeletons, minotaurs, and other various creatures hated regular bullets. I guess that means that Charlton Heston has been kicking ass in the afterlife. Players also unlock various magic powers that can be used in times of crisis, such as healing buffs, lightning bolts that strike down enemies, or invincibility.

One interesting feature is that players must share lives. The common strategy of “I’m going to get mine and to hell (literally) with my team” won’t work here. Racking up hundreds of kills might show off your skills, but it will also end your game prematurely. 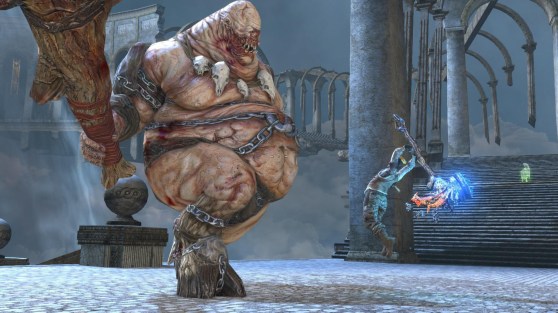 Players will definitely be hit with a tinge of nostalgia, too. The co-op four-versus-everything gameplay and various item pick-ups that must be used to keep you alive have a Gauntlet Legends feel to them. The pick-up colors are as they should be: red for health, blue for armor, and green for ammo. The strategy of picking the proper two-gun loadout and complementing it with the proper magic also reminds me of that weird but also underrated Shadowrun first-person shooter that came out for Xbox 360 and PC in 2007.

The difficulty levels are as they should be: Easy mode is simple enough for first-time shooter players to have a little fun, and the hardest difficulty will leave you crying over the corpse of your maxed-out character. The levels are beautifully designed and combine the classical Greek style with the fire and brimstone appropriate for hell. It can get a little buggy. I have seen some weird things and had some connectivity issues, but those instances are few and far between. There are dozens of different monsters to battle against, and each has its own unique set of skills and weaknesses that will require some study to combat.

God Mode isn’t a world-beater, but it delivers the mindless fun of video games past. It is the kind of game that you randomly think of and make plans with friends to play, and then forget about it for another six months. At $10 (or $5 during sales), God Mode will more than pay for itself.